That’s right, I’m all beta, all the time up in this joint.

Okay, Trade Chat being on by default in the opening seconds is a little immersion-breaking.

For those not keeping track at home, Path of Exile is a F2P love letter to Diablo 2, and the Diablo franchise in general. It features six classes, a 1350-point talent tree forest, the Materia system from Final Fantasy 7, extremely gritty and realistic graphical style, and an outstandingly clever commitment to the game’s own setting. It is currently in Open Beta, and you can download it here.

While the central concepts of Path of Exile may seem strange at first, they are all pretty logical once you get past the unfamiliar veneer. For example, let’s talk about that 1350+ point talent tree. It is not an actual talent tree as you are familiar with, at least unless you played Final Fantasy X. The tree itself is entirely passive abilities and stat increases that act as nodes you activate with talent points you receive from leveling up or getting as quest rewards. The overall tree encompasses all six classes, with the difference being the starting location for each class. Thus, for example, the Witch starts on one corner of the board nearest all the +Intelligence and other magic boosting nodes. 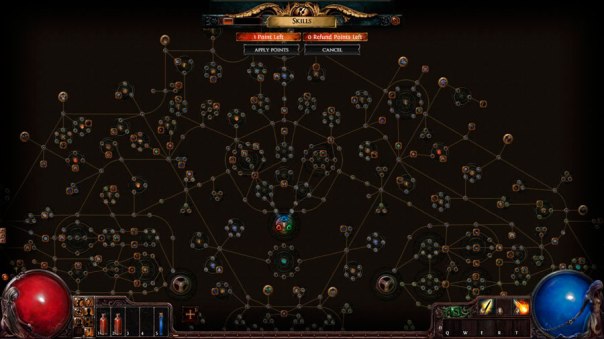 Hey, remember when this was fun?

The bigger nodes give bigger bonuses, and the extremely large ones are sort of capstone goals to help guide your character’s overall build. While your talent selection generally builds itself, it is possible to work your way across the board into other classs’ territories, if you are so inclined. That said, while the tree is certainly impressive the first few times you look at it, I’m not entirely sure of its practical use beyond standing out from the crowd. I spent 30 minutes mousing-over everything, decided which nodes I eventually wanted, and now will spend the next fifty levels getting variations of +10 Int or +20% mana regeneration. Woo, choice.

Meanwhile, the FF7-esque Materia system that Path of Exile emulates… is exactly what it sounds like. Basically, all the abilities your character has access to is governed by Skill Gems you socket into open slots on your gear. Want to use Raise Zombie? You need to fit that Skill Gem into an open blue slot. Fire Trap? Green slot. Shield Bash? Red slot. As you kill enemies, any socketed gems gain XP and level up just as you do, under the normal sort of hack-n-slash scheme (+1-2 damage, +1 mana cost each level). Later on, you will receive gear with Linked sockets which – again, exactly like in FF7 – let you link, say, a Fireball gem with a Multiple Projectile gem to (drumroll) shoot multiple Fireballs.

It is worth mentioning that, for the most part, any class can equip any Skill gem. I found a Shield Bash gem while running around with my Witch, for example, although I was unable to equip it because it required a Strength score of 16 (I had 14). While there will presumably be some +Strength gear somewhere, I could also raise that stat by navigating my way to a +Strength node in the talent tree. Pretty cool, IMO, although I believe the downside is a more limited selection of skills available for everyone overall. Shield Bash appears to be Shield Bash for everyone, so if X, Y, or Z skill is OP or garbage, you will likely be using the same skill loadouts no matter what class you pick.

The Hack-n-Slash is hack and slashy.

What is beyond reproach and, frankly, goddamn brilliant is Path of Exile’s integration of the game’s setting into the gameplay. The premise of the game is that your character has done something or pissed someone off enough to be exiled to some hideous and hostile land to die (think: colonial Australia). So while the game looks understandably dark and gritty, it actually goes much farther than that. For example, when you sell items to a vendor, the currency is… scraps of an Identify Scroll. Five scraps equals one full scroll. Which you can then consume to identify an unknown magic item, ala Diablo. There are other barter currencies that double as actually useful items (Transmutation Orbs turn normal items into magic ones, other orbs randomize a magic item’s properties, etc) too, which sets up some interesting dilemmas insofar as using them as currency to buy better gear or use them to possibly make what gear you already have better.

Now, seriously, how amazing is that economic system? Every prototypical hack-n-slash would simply have used gold pieces as the medium of exchange here. Hell, I don’t think anyone would have cared if gold pieces were used as the currency in Path of Exile, even though it doesn’t make any logical sense for there to be a vast sum of wealth in a prison colony. It reminds me of Metro 2033 where your currency for buying guns and such were rounds of military-grade ammo, which you could technically load into your guns and fire.

Are there downsides? Sure. Since there is nothing worth less than a scrap of scroll, the beginning hours of gameplay highly encourages you to loot 100% of all junk since 5 pieces of anything = 1 useful scroll. This goes the other way too, wherein selling a magic item nets you a rounded-down amount of other material rather than 1400g vs 1100g. Vendor items get a bit goofy too, when they charge the same price for a necklace that provides 2 HP/sec regeneration with another necklace that provides 3.7 HP/sec regeneration.

Another example of the noble commitment to rational setting consistency? Instead of health/mana potions, you have health/mana flasks that use X number of Y charges for Z effect. And they recharge when you kill enemies. I mean, sure, there isn’t much of a logical reason why the Frost Elemental slime drops a wooden tower shield, but at least you’re not seeing more glass beakers full of replenishing liquid mowing down zombies as you’d find in an alchemist’s lab. Monsters drop less items as a result of this artistic/setting direction, but it still manages to feel similar to the loot explosions of Diablo (if less intense).

So, basically, I am having a lot of fun thus far with Path of Exile. While the devs have posted a sort of cash shop manifesto for this F2P game, they appear to actually be taking the “no P2W” mantra seriously. Hell, I don’t think they are even selling +XP potions, which is something I have simply come to expect from these games. The one lingering concern I have is the whole Ranged vs Melee (im)balance, which is something they do have on their roadmap to address. But beyond that? If you liked Diablo 2, play this game. Hell, if you liked (or disliked!) Diablo 3, play this game. It’s a F2P hack-n-slash, so what do you have to lose?

Other than your time, of course.