← Destiny, Bioshock Infinite, and FF6 on phones
The Hearthstone Hole →

I have been playing the Battlefield 4 beta these last few days, and I’m not quite sure what to think. 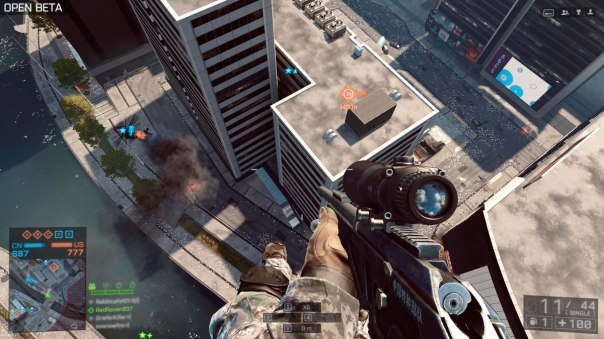 It certainly isn’t the jump in quality from Battlefield 2 to 3, that’s for sure, although there are some interesting moves. For example, the default rocket launcher has a tracking mode that activates when the Recon class designates a target with their binoculars; this sort of solves the incredible power discrepancy between Engineers that had unlocked the, er, lock-on launcher versus newbie players.

Another interesting change was how they gave the Recon class (aka snipers) C4 charges. While this makes roof-top campers extremely annoying – they can drop C4 at the elevators and wait for the door opening sound for an auto-kill – it also creates an amazing tension in the class. Do you run out and C4 that tank while risking being caught in close-quarters with a sniper rifle, or do you hang back and try and snipe with a tank blowing you and your team up? Giving snipers claymore mines and assault classes C4 makes more thematic sense, but reversing those roles makes for more interesting gameplay decisions. Even better, the thermal Binoculars you get not only lets you lock on to vehicles for your teammates to kill (you get bonus XP when they do so), but it lets you more easily spot enemies running around that are too far to hit. Or, honestly, that you aren’t skilled enough to hit. Just spotting them is basically 1/4th a kill though, and it’s a useful service to do so.

However, some design changes have gone in the wrong direction. Technically, it was Battlefield 3 that “introduced” the concept of the medic class having to actually unlock their core ability, i.e. to revive people, but Battlefield 4 is taking that to ridiculous extremes. It takes 11,000 Assault-class XP to unlock the Defibrillator, which I hope to god is a placeholder value. Perhaps if smaller maps were available it might not be so bad, but actually getting that amount of XP on a class that otherwise brings nothing interesting to the table is a massive chore; not only do the other classes have easier ways of racking up easy XP, but remember that BF4 (and BF3) made the change to a regenerating HP model too. Between that and the near-zero Time To Kill numbers, the ability to throw a Med-Pack is only ever useful when you find yourself dueling someone from behind cover.

The unlocking situation gets even more ridiculous when you look at the Support class, aka the ammo guy. While I suppose it was annoying/immersion-breaking when a single Support dude could drop an ammo box and spam infinite grenades over the wall, putting the ammo box behind a 52,000 (!) XP grind-wall is an extreme overreaction. The most obvious trickle-down effect is that it makes every class weaker by extension: what good is an Engineer without rockets? Given how you respawn with full ammo, the smart move is then to play both aggressively and carelessly by spamming everything you have and then effectively suicide yourself for Round N+1.

While there has also been some grumblings over the idea of “Battlepacks” – random lockboxes filled with camos, dog tags, XP bonuses, etc – as someone who played Mass Effect 3’s multiplayer for a while, I don’t see it as such a big deal. Yes, it is a cynical cash grab given how you can pay money to buy those things. However, as far as I can tell, you do not actually unlock more powerful weaponry from these boxes. Which automatically makes them less of an issue than ME3’s lockboxes where opening a rare Widow or Carnifex/Paladin was basically the start of your game.

Beta is beta though, and this one is more restrictive than most. Overall, I can’t say that I’m too impressed. It’s honestly been so long ago that I uninstalled BF3 that I forget if being able to spawn inside a vehicle from the Deploy screen is something new to BF4 or not. And, really, that’s kinda what it comes down to: why do we need Battlefield 4 again? Once all the maps are unlocked, then perhaps we’ll see where the differences lay. Plus, supposedly Commander Mode is back.