No, not obviously. When the Dungeon Keeper (DK) app first came out, the entirety of the criticism revolved around EA and the bastardization of a beloved (?) franchise into a time-n-money sink exploitative F2P game. Here is the thing few people might know: DK is perhaps the best entry into this sub-genre. This might sound a little be like being called “the best STD,” but the game itself is surprisingly good.

At least, it was good. 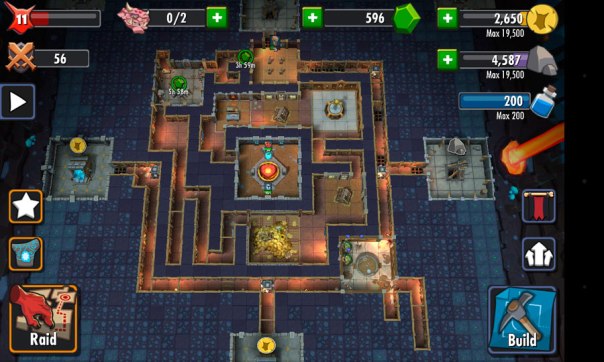 What made DK good (and still does) is the fostering of creativity and depth through constraint. As you might already know, DK is a downtime management game – you spend more time not doing things than actually doing them. The basic principal is to construct a dungeon filled with traps to safeguard your own stockpile of resources while raiding the dungeons of others. Everything takes time to complete: summoning minions, constructing traps, upgrading traps, excavating rock tiles to make room for traps, and so on. On release, the excavation was particularly lampooned in that the map was filled with tiles that took 4 hours and 24 hours apiece to dig out. Or, you know, you could spend Gems (an RMT currency) to dig them instantly.

Here’s the thing though: being time-locked forced you to construct novel dungeon designs with whatever you had available. Since everyone starts on the same map, we could imagine there being X variations of the perfect defensive layout had all the squares been filled with soft dirt (takes 3 seconds to dig). Instead, we have X * Y variations because different people are at different levels of excavation; some concentrate on digging out all the 4-hour tiles instead of the 24-hour ones, some are the opposite, and still others concentrate all their time on upgrading traps instead of excavation. Creativity through constraint. Yes, technically this also enables the designers to wheedle in-app purchases out of you. But! It’s a compelling gameplay mechanic nonetheless.

Somebody just got sent home.

Before I move on, I also want to mention that the other end of the creativity came from watching the replays of your own dungeon getting sacked. Given how attacking players can use magic to bomb open your walls or remotely disable your traps, sometimes it feels like there is nothing you can do to stop attacks. But what you can do is make your dungeon punishing. Magic regenerates very slowly, such that a player looking for enough resources to purchase an upgrade are unlikely to blow their entire load just to sack your one dungeon when they could split it up inbetween juicier, less-defended targets. It is a particularly novel delight watching a replay of someone throwing 2+ hours of congealed time at your defenses and see them go home with nothing. It’s part of the reason why I have played DK for so long.

The problem(s) with DK really came with their Update #2 several weeks ago. There are other fundamental problems, but I’ll get to that in a bit. In short, Update #2 destroyed the in-game economy.

Prior to Update #2, you unlocked bomb-proof walls as you upgraded various rooms and the Dungeon Heart. The number of such walls you could place were extremely limited, so you really had to think about the best location to place them. Did you want to protect a particular room? Force minions down a particular corridor? Or did you want to prevent people from digging a tunnel from the South part of the map? What the Mythic devs decided was to up-end the entire mechanic: instead of bomb-proof, they made walls upgradable. Instead of 20 bomb-proof walls at the end, you could have 100 not-bomb-proof walls that could sustain various amounts of magic damage depending on level. 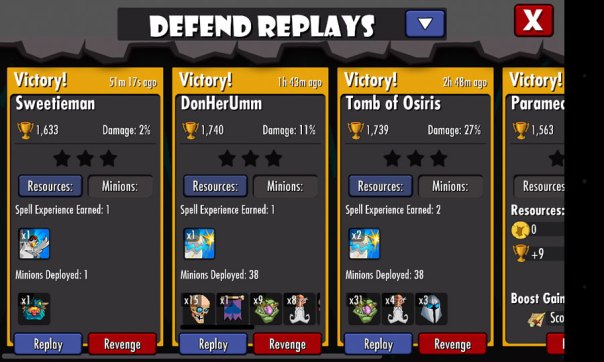 Seriously, watching people fail on your dungeon never gets old.

For example, my current Bomb Wall spell deals 500 damage in a 3×3 square. A level 1 wall has 300 HP, and each level beyond that increases wall HP by +150. It costs 10k Stone to place a level 1 wall, 30k to upgrade to 2, 60k to 3, 120k for 4, and so on. As you might imagine, this whole “wall update” introduced a Stone sink on a massive scale. The game already had sinks of sorts – my current rooms now cost 2 million Stone apiece to upgrade – but I can imagine there may have been a need at the higher end. Or, perhaps more cynically, the devs wanted the DK Premium “subscription” (+40% resource gains from raiding) to be more appealing.

The Stone sink though has set off a cascade of fail throughout the game. The amount of resources that can be stolen from your dungeon is 30% of your stockpile (up to a maximum determined by your Dungeon heart level) + 10% of your unclaimed resources from quarries/mines around the map. Although there was always an incentive to “hide” your Stone in upgrading traps and such, there simply weren’t all that many locations; you can only have X number of Fire Traps and doors and such. Update #2 introduced 100 more to the pile, e.g. walls, and made it a high priority to upgrade them, e.g. to help prevent more Stone from being stolen via Bomb Wall spells. But since all the high-level players are now Stone deficient, the only people who have Stone laying around are… low-level players.

So the current “metagame” in DK is sandbagging, which means intentionally lowering your Trophy score (i.e. ELO) to get matched against noobs who either don’t know what they’re doing or have already abandoned the game and are simply letting their resources rot. Since they are low-level, it’s easier to steal their resources with your high-level minions given how their traps/layouts aren’t difficult. Since it’s not difficult to invade, you can send in less advanced troops that have quicker build times (e.g. 40-second Trolls instead of 20-minute Ghosts). Since you have quicker build times, you can raid more often and likely not need to use magic at all. Since you’re raiding more often, you are in-game for longer, which prevents your rapidly accumulating Stone reserves from being vulnerable to theft. And because of all of this, you are more likely to hit whatever Stone target you were going for and then spend said Stone, putting you back down to near-zero and safe to log off. 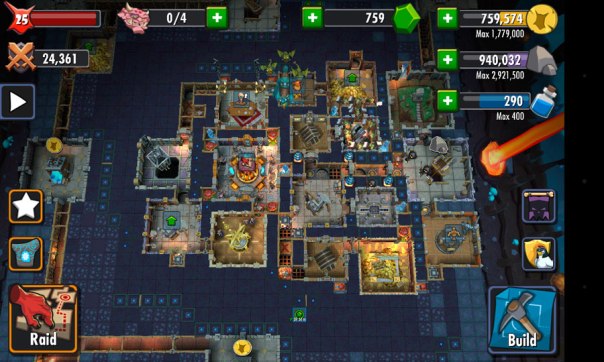 My current dungeon noobgrinder. Hint: don’t spawn inside the killbox.

The Mythic devs have responded on the forums that Update #3 will fix all of this and punish the sandbaggers, but the preview we have gotten is woefully naive. Their “solution” is the introduction of PvP tiers of sorts based on ELO. The higher the tier, the more bonus Stone you receive for a win. At my hypothetical tier, I could see an additional… 35k Stone. For fighting someone tooth and nail as advanced as myself. Who isn’t likely to have 35k Stone laying around to begin with. Compare that to someone at a lower ELO would could easily have 200k sitting around just waiting to be stolen.

Needless to say, this is bad game design. It is not bad simply because I dislike it; it is bad because it will not accomplish what it set out to do, or worse, have the opposite outcome.

I am not especially surprised at this non-solution, as the devs have yet to address a similarly counter-intuitive decision vis-a-vis intentionally not opening mines/quarries. There are 8 mines along the outside of the map, and unlocking them means getting free resources each time you click them; at the highest levels, you can get 200k+ Stone every 32 hours or whatever. However, enemy Keepers use these same mines as spawn points. Thus, the more mines you open, the more vulnerable your dungeon. The less mines you open, the less vulnerable your dungeon (just stuff all your warehouses in the corner), the easier it is to keep resources you steal from others, and the better off you are in general. Also? You can’t close mines you have opened. Basically, if you’re like me and open all the mines, you’re just screwed, permanently. 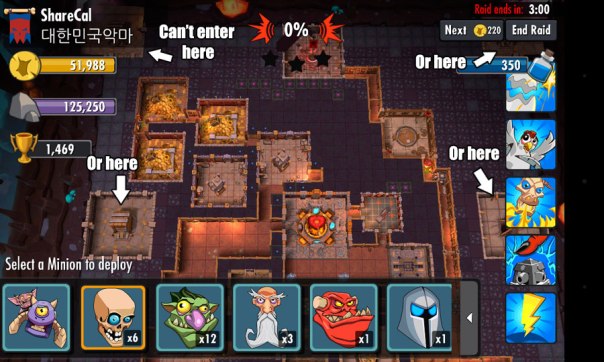 There is close to zero downside to this.

There is a similarly counter-intuitive punishment mechanic in upgrading your Dungeon Heart. You gain access to more traps and rooms by upgrading the Heart, but each level increases the maximum amount of resources that can be stolen from you. Thus, the only sane strategy is to make the Heart the last possible thing to upgrade. If you upgrade early, whoops, permanently screwed with hardmode.

My solutions to these issues? Well, first, I’d levy a 20k (or 20%) penalty to resource gains for each mine you do not unlock, down to some minimum – if your raid would have resulted in 100k Stone, you actually only get 60k if you have three mines unopened. Considering how the only players worth attacking are those with 100k+ Stone up for grabs, this would hopefully encourage people to open their mines, making more targets available. On a related note, the second change is one’s ELO score should be commensurate with the amount of Stone that can be stolen, not Dungeon Heart rank. Thus, the sandbaggers can get “easy” Stone, but significantly less such that they might have been better going after equally-skilled players.

Third, mine/quarry resource gains should double, minimum. Fourth, flip the numbers: 30% of unclaimed Stone is vulnerable and only 10% of one’s stockpile, not vice versa. This encourages more periodic log-ins during the day and makes people feel safer in saving up their Stone rather than immediately sinking it into walls. There is nothing more demoralizing than logging on and seeing someone having stolen 100k Stone, knowing that you would have been better off upgrading a door or whatever.

This may seem like a lot of words to devote to an evil, bastardized mobile app, but… I think you’d be surprised. I have long since deleted Castle Clash and feel like another game in this sub-genre would have to get a lot of things right to surpass Dungeon Keeper in terms of fun and strategery. Is it annoying waiting all the time? Sure. Then again, a 4-hour excavation only takes 2 hours if you slap your imps, and thus each time I boot the game up during my breaks at work there is something new to do. I spent two hours (!!) “playing” last night (in 6-minute increments) trying to scrape up 500k Stone to hit 2 million without risking getting bled dry overnight. The app definitely has an expiration date at some point – the thought of trying to get 6 million Stone for an 8-day upgrade is just obscene – but the same could be said about a lot of games.

So, yeah. Dungeon Keeper. Didn’t see that coming, did you?