So everyone seems to be talking about Crowfall, the latest unreleased Jesus game from veteran Jesus game developers. Included amongst them is the perennial nostalgia favorite, Raph Koster, bringing up the consultant rear. Or as I like to call him, the M. Night Shamamamalan of video game design. I mean, I’m looking at his Wikipedia and I’m seeing a huge blank starting from around 2006 onwards. I’m not a game designer, of course, but if I were, I would like to think that the people who deserve recognition are, you know, actually making games people are buying. Maybe even in the last five years!

In any case, I’m not exactly sure why we’re supposed to care about Crowfall right now. I suppose there’s a deep, philosophical difference between straight, corporate PR advertisements (e.g. Guild Wars 2 manifestos) and… Kickstarter campaigns, right? It used to be that these companies paid hundreds of thousands of dollars in advertising into the face of a skeptical audience, but now the script has been fully flipped: 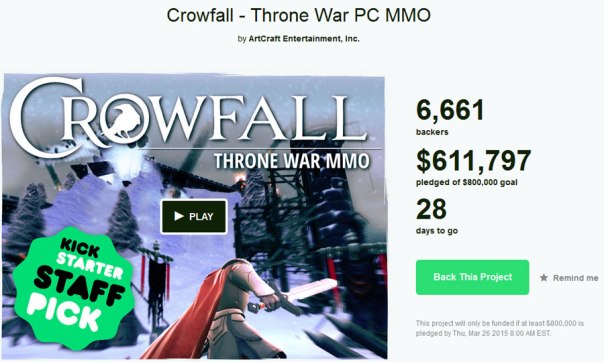 That is an average of almost $92 per backer, by the way.

What I will give Crowfall some much deserved credit for is its very evocative premise:

We are Immortal. The Gods choose the best of us to be Champions. They send us to the Dying Worlds to fight, to collect the souls of Damned. The Mortals fear us. They see us as Executioners and Scavengers. They call us Crows…

That has a lot of juice. It neatly solves the conceptual problems of “why do worlds reset” and “why does my character respawn” and even “why am I doing this?” You can almost immediately hear the fanfiction being written – perhaps you’re not a champion, but a slave forced to collect food for a parasite god. Or you’re condemned to your own Sisyphean torment. And were these worlds “dying” before a bunch of hungry godlings showed up? This description greases the wheels even further: “The Shadow Worlds lie closer to the Hunger, where even the Gods dare not tread.” What do the gods fear from the Hunger that you yourself don’t? Mmmm.

But that is where this whole Crowfall hype thing both begins and ends with me. I mean, how many “genre-saving MMOs” are we up to now? Who is still playing ArchAge or Wildstar or whatever? There is jaded cynicism on the one hand, sure, but irrational exuberance (at best) is the other. Maybe everyone is just happy it’s not another endgame raiding MMO, I dunno. I do think we would all be better off pumping the brakes a bit so we can actually see what Jesus features make it off the cross of development.

Talk is cheap. Actually delivering a product that anyone still cares about when released is more difficult.