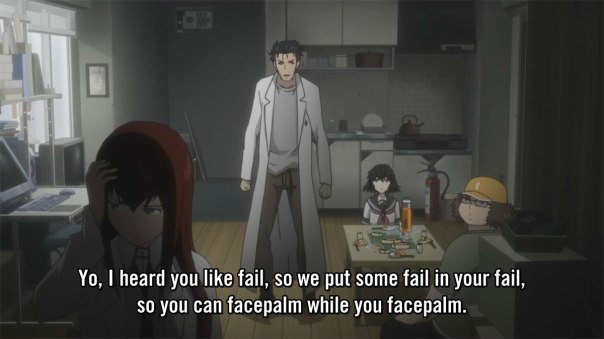 Steins;Gate is a gripping, emotional drama that also reminds me of why I hate time travel as a narrative mechanic so much. The anime follows the eccentric teenage “mad scientist” Rintaro Okabe and his two friends/Lab Members as they spend their days fighting the “Organization” and otherwise goofing around with gadgets. After going to a conference on Time Travel, Okabe encounters a woman stabbed and lying in a pool of blood. Shaken, he texts his friend about the incident while the Phone Microwave gadget was running… and his text arrives 5 days in the past, changing the future.

What is brilliant about this anime is exactly what I dislike about the conceptual narrative. The first half of the anime explores the nature and limitations of the “D-Mail” system – the ability to send a phone text to someone in the past – and each successful D-Mail permanently changes the world and resets everyone’s memories to match it… other than Okabe, who remembers everything. Later on, the anime darkens considerably once Okabe realizes the butterfly effects of all these changes and the seemingly inevitable future it portends. And that is the rub. Each time the world is changed, everything that happened previously ceases to be. Okabe (and you) remember that other world, but it’s irrelevant in a practical sense, erasing huge swaths of continuity and character development.

Make no mistake, Steins;Gate is a superb, shocking, draining anime and by far the best version of Time Travel I have encountered in fiction. I still hate Time Travel as a narrative mechanic though, and my attachment to the characters of Steins;Gate and their sacrifices (which are erased) only deepens my antipathy for it.

But if you have no issue with Time Travel? You should see this anime yesterday. 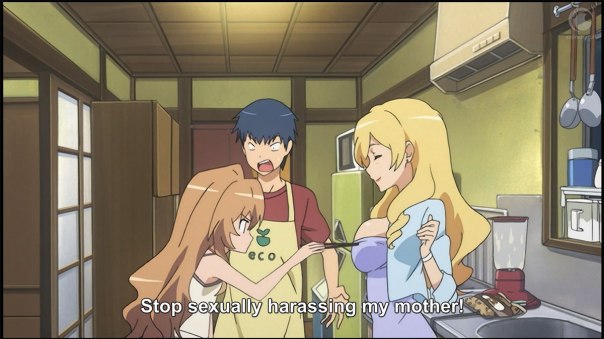 In a nutshell, Toradora is a high school romantic comedy with enough dramatic elements and interesting characters to set it apart from what otherwise amounts to another entry in the busiest anime genre of all time. The show follows Ryuji, a high schooler who looks like a delinquent but is actually fairly sensitive and domestic, and his new neighbor Taiga, the short “palm-top tiger” with an even shorter temper. Once the two of them realize that they have crushes on the other’s best friend, they set differences aside while trying to set the other up with their crush. As you might expect, misadventures and misunderstandings abound.

Overall, I really enjoyed Toradora to the tune of crushing all 25 episodes across two days. As mentioned, there is enough drama and emotional scenes to set the anime apart from its peers, if the quirky characters did not do so already. And most importantly? There is actually catharsis by the end; this is no harem comedy in which nothing is resolved by the final credits.