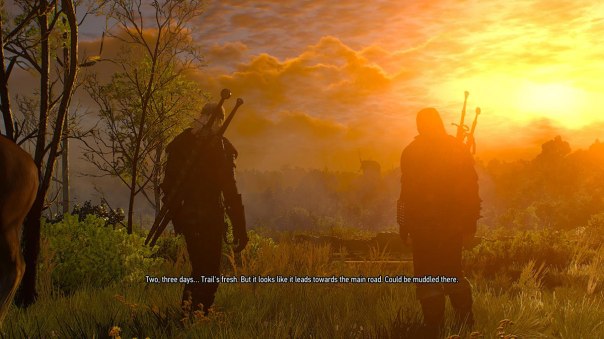 Things will get muddled all right.

Having finally seen the ending credits after 68 hours of gameplay, I can now officially conclude that the Witcher 3 (TW3) is the worst best game I have played. That is not a typo. The typo is TW3 receiving a 94 Metacritic rating from the gaming press that spends more time praising TW3’s visual novel bits than the actual gaming bits – which are not only bad, but actively depress the few parts of TW3’s muted brilliance.

If I had to point to one particular quality that the Witcher series as a whole has nailed down better than any other game, it would be Immersion. This series has always excelled in conjuring a dark (but not grimdark) medieval fantasy zeitgeist, and it is as true in TW3 as the others. Isolated villages feel isolated; muck-covered peasants cough with believable phlegm; people are petty, cross, and rather accustomed to living as though they could be killed by monsters at any moment.

In a word, TW3 is authentic.

This authenticity more or less carries over to the questing elements of the game. Gone are the “kill 20 drowners” garbage quests from TW2. Indeed, there is a developer interview floating around out there that states the team was basically tasked with coming up with quest ideas first, before anything else. This ends up making them feel more like distinct, mini-novellas than the side quests one might be accustomed to in other RPGs.

This distinctiveness has a double-edge however, and the full weight of all the other poorly designed systems causes the blade to backbite deep. 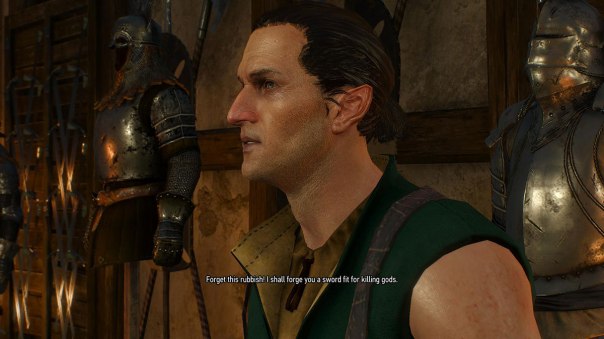 Psst… he’s talking about this sword.

For example, the overarching plot and impetus to action in TW3 is for Geralt to find Ciri before the Wild Hunt does so. As you might imagine, Ciri and the Wild Hunt always feel one step ahead of you – it would be a rather odd game indeed if she was found in the first place you looked. But the issue is that in your search for Ciri, the people with the information you need always have problems of their own… problems that you must solve for them before they divulge that Ciri has been gone for weeks. And those problems have sub-problems, sometimes nested four-deep. And in the course of solving those nested problems, you will encounter hundreds of entirely meaty side quests that have nothing to do with Ciri at all.

In any normal game, the Take Your Time trope that this turns into would be just whatever. But TW3 is not “just whatever,” it is a game that has to leverage its immersion for full effect – an effect that evaporates into the mists once you realize that you just spent 20 hours doing random shit that doesn’t matter in finding Ciri. Why create this huge open-world map to explore when the central plot is a supposed race against time? When you stop taking the central plot seriously, even the “meaningful” side-quests start sounding hollow; the writing tries to make you feel something about the world, while cheapening it at the same time by simply existing.

Every other thing about the game just gets worse from that baseline.

I could spend hours on how poorly designed everything is about TW3’s core systems – and who knows, I still might – but I feel the root revolves around the gutted crafting system. In prior titles, you collected all the things because you needed all the things to keep stocked on potions, oils, bombs, and so on. In TW3, you only have to craft a given item once, to essentially unlock unlimited amounts of them; crafting Swallow (the ever-useful health regen potion) might only give you 3/3 uses, but an hour meditating restocks all consumables. This has tremendous cascade effect on the rest of the game systems.

Using Swallow as an example again, the recipe calls for one Dwarven Stout, one Drowner Brain, and five Celadine (a plant). Craft it once, and you’ll have unlimited Swallow potions. There are upgrades to potions and bombs and such, but… do you know how much Celadine you’re going to ever need? Thirty (30). That’s enough plant material to craft every single thing in TW3 that requires Celadine. Drowner Brain? Six (6). Do you have any idea how many Drowner brains you’re going to accumulate throughout TW3? A fucking million. And every one of them after the first six are going to be useless. 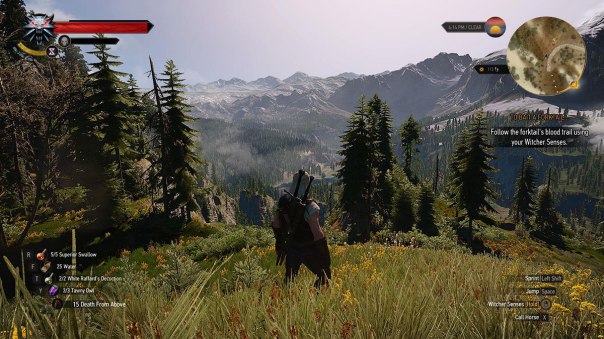 As you might imagine, needing only a tiny fraction of items you loot to gain immense power essentially makes looting pointless. At least, if not for the fact that TW3 also has random loot. Not just random loot, but unbounded random loot, such that you can find a level 20+ sword recipe in a burlap sack at level 3. Or never find it at all anywhere. There are some sanity checks involved regarding actual gear, but ingredients are all over the place.

What gets me the most is how much this affected my own sense of immersion. There were a lot of things wrong with the first Witcher game, but the convoluted Alchemy system felt right in the setting. You were in a dirty medieval world, crushing flower petals to combine various elements together to create a potion that was pure poison to a normal, non-mutated man. You had to keep collecting herbs and monster organs because otherwise you wouldn’t be powerful enough to survive the next encounter. That kind of system has a positive feedback loop with immersion. The one in TW3? It is a negative feedback loop. One and done, everything else is trash.

Then there is the combat itself, which is similarly dumbed-down. Left-click to light attack, Shift-left-click for strong attack, right-click to parry, Alt to half-dodge and Spacebar to full dodge. Use Signs and Bombs and whatever as you need them. At the 3rd-highest difficulty, combat was always a snooze-fest even if I died; a level 12 Drowner took out my level 22 Witcher in 5-6 hits because I got too lazy to time Alt correctly. Having to pay attention is usually a hallmark of an engaging, difficult combat system, but it simply isn’t in TW3’s case. It is more that actually paying attention and being careful makes TW3 combat a joke; it is only hard precisely when you’re trying to speed through it because you want to be done.

Don’t get me started on the talent trees and Rune systems. They’re bad, whoever designed them is bad, and every single person who allowed them to occur should feel bad. Seriously, after you spend 20 talent points in the Signs tree, the entire 3rd row of talents you unlock is… +5% Sign Intensity for a given Sign. The first two rows granted new abilities and effects to your normal Signs and you follow-up with +5% to an incomprehensible stat? And that’s exactly what all those precious Rune slots in weapons and armor are: +2% chance to stun, +3% Igni Intensity, and similar garbage. It’s like the designers aren’t even trying.

At the end of the day, the people out there praising this game are praising the Telltale Presents: the Witcher 3 story. From a game mechanics standpoint, this is one of the worst designed games I have played. It’s not clunky, it just works against all of the strengths that the game otherwise brings to the table. In other words, the worst best game I have ever played.

Posted on October 30, 2015, in Review and tagged Dumbing Down, Game Design, The Witcher 3. Bookmark the permalink. 9 Comments.