I’m pretty spoiled by my 970 card at this point.

There is a lot of interesting things going on in TESO. For example, while there is an option for a more traditional 3rd-person perspective, I stayed in first-person the entire time for its sheer novelty. I also appreciated the dedication to the traditional Elder Scrolls trappings, up to and including the ability to literally steal all the things. Want some Grand Soul Gems as a level 3 character? Just crouch behind the merchant’s cart and pocket (?) them. Finding a random armor rack with a full suit of wearable armor that you could just take and equip was rather delightful.

The progression/leveling system in TESO is interesting as well. There are four classes, each with three class specializations. Beyond that, every class has access to the same dozen or so general specialization lines: Light Armor, Two-handed Weapons, Destruction Staves, and so on. Most of these specialization lines have ~6 active abilities and a number of passives. Your character has a total of five hotbar buttons and one ultimate, and it is up to you to mix and match. Additionally, individual abilities level up with use in typical Elder Scrolls fashion, but once an active ability hits rank 4, it can be “morphed” into one of two mutually exclusive options, which typically adds bonus effects.

While all of the above systems felt satisfyingly crunchy, it reminded me heavily of Guild War 2’s system – limited ability slots, choosing abilities from a wide list, earning Skill Points from exploration (every three Skyshards found in TESO grants 1 Skill Point), and even “leveling up” skills in a sense. In fact, that was my exact problem: the more I played TESO, the more I felt like I’d be having more fun playing GW2. Especially when I started thinking about PvP and three-way battles. 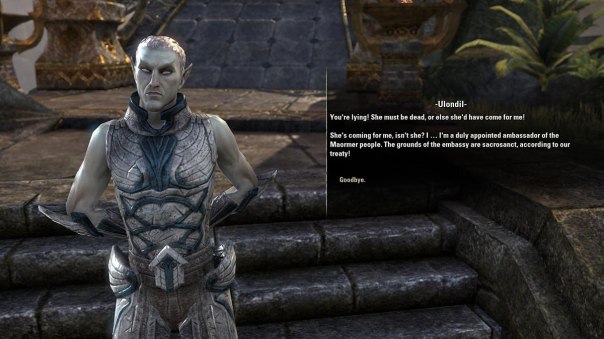 Not pictured: any combat.

Strictly viewing TESO as a sort of pseudo-Skyrim did not assist in keeping my interest level high enough to justify more play time. As tends to be the case, the existence of other players ruins the MMO experience. Apparently mobs drop individual loot so there isn’t any kill stealing, but objects in the world (chests, etc) absolutely disappear if someone loots them. I did not stick around a particular place long enough to see if they respawned, but the bottom line is that there was never a point in time that I was thankful to see another human playing “my” game.

It’s worth noting that I made it to level 10 without seeing even one “kill 10 whatever” quests. In fact, many of the (non-side) quests I encountered were fairly lengthy and involved. Not quite Secret World-level involved, but more than the industry standard. That being said, I found myself actually missing those kill quests, as the opportunity to kill anything was rather muted.

In any case, those are my impressions of TESO. I deleted the 44gb installation yesterday and don’t particularly see myself downloading it again. It wasn’t bad – at least the little slice of the beginning I played – but my New Years resolution is to not play “just OK” games to completion as if I don’t have a backlog of potentially amazing games to play through.

Posted on December 29, 2015, in Impressions and tagged First-Person, Guild Wars 2, Loot All the Things, Skyrim, The Elder Scrolls Online. Bookmark the permalink. 5 Comments.