It’s been a while since I was last gripped by a game for 5 hours straight. Over multiple days. 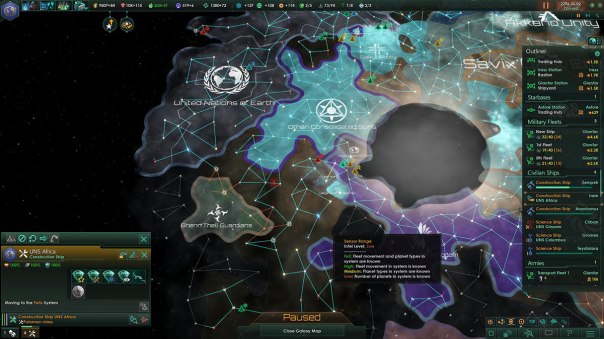 Stellaris is a non-Paradox game developed by Paradox. This is important because of my history with this developer. Much like with EVE, I had heard a lot about Crusader Kings 2, all sorts of crazy stories, and bought it thinking that I’d like to play the game that generated them. Nope, I played about 3 hours before uninstalling it. So when a friend of mine recommended Stellaris recently, I was skeptical. So skeptical that I ended up installing Galactic Civilization 2 (free download) and Galactic Civilization 3 (don’t even know where this came from) in order to scratch the itch that Civ 6 had left. Then, finally, a recent 60% sale on Stellaris pushed me over the edge.

I have been falling ever since.

I’m about 30 hours into my sort of beginner tutorial playthrough and I’m trying to decide whether to start over or not. There have been some noob mistakes on my part, and some additional jankiness with the game that I am coming to terms with. I was in a recent war, for example, and was prevented from claiming total victory because… an ally was occupying the last planet instead of me. This enemy civilization had zero unoccupied planets and yet they “forced” me into a truce… that still resulted in me claiming all their shit. Except that last planet, with was taken over by my ally a few in-game months later. I don’t even know if it matters – the internet is awash in outdated information on the game – but it still bothered me.

Regardless, I am more excited about a game than I have been in quite some time. I’m still trying to figure out if it’s because Stellaris is a new puzzle for me to figure out, or if I’m excited about a new “survival-ish” experience of exploring and uncovering resources, or something else altogether.

Either way, I’m looking forward to figuring it out.