← Dog Catches Car
Sometimes it IS that Simple →

How Not to Return

Coming back to a game can be incredibly daunting. Coming back after it has gone through several updates can be more concerning still.

Then there’s No Man’s Sky. 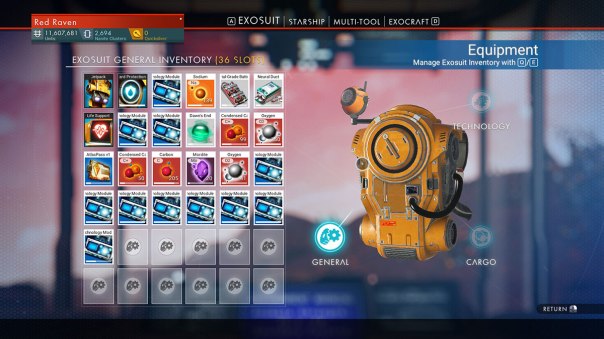 I didn’t want to play that character anymore anyway.

The No Man’s Sky meta-narrative is inspiring in its own way. In the beginning, the game was hyped beyond belief (and reality), the designers actively lied about features, and it was the go-to example of a failed game. Over the years though, the same designers have… stuck to it. Update after update has improved the gameplay experience, and now it is very close to completely resembling the product that was promised in the first place. While some may decry giving the company any praise for fixing what ought not have been broken in the first place, their dedication towards making things right is completely unexpected in the current gaming environment.

The problem is that so much has changed between the various patches that my 50+ hour character may as well have been erased.

The main culprit appears to have been NMS’s “Next” patch. There was a major overhaul in the crafting system, or upgrade system, or both, or something. Basically, all of my upgrades and enhancements were turned into “Obsolete Technology” that I had to scrap for upgrade currency. Which would have been slightly okay on its own, but now I have no idea how anything works anymore. Which resources are important have changed, all of the planets in the galaxy have changed, and my previously-existing base appears to be lost entirely/”archived” somewhere. While there have been a few prompts to check the Codex here and there, otherwise there is nothing resembling a tutorial on solving the “Dude, Where’s My Base” situation.

Slightly perturbed, I decided to spend my limited free-time patching up Fallout 76 instead. There have been several feature patches there too, resolving some long-term Quality of Life issues and introducing some new quest content as well. Everything was looking good… until I realized I could not aim-down-sights anymore. Right-click and nothing happened. With a melee weapon equipped my right-click would Block attacks like normal, but no scopes apparently.

Kind of a bummer when you are a Rifle build.

Near as I can tell, this problem might be related to mods. Deleting the mod file and removing the Custom.ini did not fix anything, nor did reboots or verifying file integrity. So, I’m typing this up while waiting for another 55 GB install to complete. [Edit: this didn’t fix the issue either]

Both experiences are giving me time (literally) to reflect on the situation though. Blizzard spends an inordinate amount of time trying to make the transition from lapsed to paying subscriber as easy as possible, to the extent of not changing systems that desperately need fixing. It’s hard to see value in that approach when you are actively playing the game, as all that occurs is basically stagnation for the sake of people who aren’t even customers. But if I weren’t so starved for survival-esque experiences, my first five minutes back into No Man’s Sky would have ended with an uninstall.

I’m not even sure there’s a middle path anymore. Games require you to learn their arbitrary, sometimes non-intuitive systems in order to succeed. It is hard enough trying to remember which buttons do what after a year or two, and then you add the possibility of previously accumulated experience no longer being useful (or actively bad)? You might be worse off than a brand new player at that point. In fact, I am worse off, because my patience for relearning tasks is immensely low – if I am to spend time learning something, it may as well be a new thing.