(Note: this review was written more than 10 years ago)

If you were one of the millions of fans of the Evangelion series who were left unsatisfied by its ending, you are not alone: even acclaimed director Hideaki Anno admitted that he could do better. Given a second chance to forge a more complete and lasting end to the series, Anno began work on what would later be called Evangelion: Death & Rebirth. Scheduling problems reared its ugly head once again, and the saga was still left without its revisioned conclusion. Finally, in mid-July, the collective hearts of millions of Eva fans worldwide were once again bled with the release of End of Evangelion.

The movie itself takes place immediately after the end of episode 24 of the television series, and it is designed to take the place of the remaining two episodes, which had been produced under tremendous budgetary constraints. As such, End of Evangelion is not so much a stand-alone movie but rather a remake of the original television ending. It is not at all recommended for anyone to watch the movie without having seen the series first, as it is confusing enough even with the benefit of a season’s worth of background material; without prior experience, End of Evangelion is an exciting but otherwise incomprehensible film.

It is when a viewer has brought along the memories of the series with them, that End of Evangelion begins its unrelenting bludgeoning of the soul. Knowing ahead of time that Anno never intends a second season, it is impossible to stem the tides of anxiety that one feels for not only Shinji, Asuka, and Rei, but also for the rest of cast with which whom so much has been shared over so long a time. With the death of the final Angel, what will become of NERV? How is Shinji taking not only the loss of Kaworu but also of the apparent loss of Asuka? What do Gendo and SEELE intend to do now? All of these questions and expectations are brought with you long before the movie even begins, only heightening a growing sense of dread and foreboding. How will such a emotionally powerful series finally conclude?

The answer is simple: with a titanic climax of feelings an order of magnitude more tremendous than the series which heralds it. Taking only a few moments at the beginning for quite reflection, End of Evangelion crests the hill and begins a free-fall descent that promises to pull no punches nor take any prisoners. Shinji crumbles into oblivion when faced with Asuka’s catatonic form just as everything falls apart when Gendo finally confronts SEELE head-on about its personal vendetta against mankind. When the order is finally given to invade NERV and seize control of the remaining EVA units, one is left in a state of mute horror which pervades unabated almost throughout the entire feature. Watching the familiar hallways of the NERV complex unceremoniously painted crimson with the blood of characters you have been invested in since the first episode of the saga, borders on being one of the most excruciatingly torturous emotional experiences ever conceived through animation, if not all other media. The state of shock only is further exacerbated after what little hope the characters themselves held onto is shredded at the hands of a malignant, yet infuriatingly indifferent enemy. When Shinji – whom remains the audience’s only tenuous link to a rapidly crumbling reality – begins to realize the scope of the destruction around him, the viewer in turn is subjected to the same fracturing of the self he undergoes. It is impossible to verbally describe the exact feeling of hitting absolute rock bottom, but Anno nevertheless succeeds in not only visually defining it but also in empathetically expressing it. 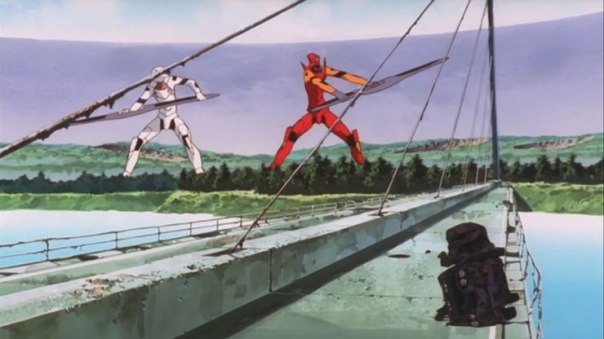 Only after destroying all barriers a viewer might have set up against a foreseen assault of the senses, does the true meaning of the Evangelion series spill forth in rapid succession. The second half of the film details the abstract process of Instrumentality in a manner which, at best, can be described as convoluted. However, it is at this point irrelevant to the first-time viewer what happens; suffering from serious sensory overload, they simply observe the happenings with pupils fully dilated. Indeed, it is the latter portion of the movie which attracts the most criticism with the brunt of it residing on the questionable shift of apparent style it makes between the two halves. It is only subsequent viewings of the second half that reveal the underlying subtleties of the epileptic interludes accompanied by live-action shots, which then justifies an otherwise very disconcerting reversal. The final moments of the film are as lucid as they are ambiguous, and the last scene in particular will most definitely go down in history as one of the most misunderstood scenes ever crafted.

Just as the rest of the Project Eva team returned to reprise their roles of director, animators, and other production staff, so too did Shiro Sagisu return to compose music for the saga’s conclusion. His work on the television series was very commendable – if not downright brilliant – and Sagisu goes on to prove that he has matured as a composer with some of the most intriguing pieces of music I have ever heard. Sure, there were a number of remixes of classic Evangelion songs such as Manatsu no Shuen and Tanin no Kanshou, but it is the original pieces which make the soundtrack worthwhile. Thanatos – If I Can’t Be Yours plays during the credits portion of the movie – which curiously enough comes in the middle – and serves the function of being the transition between the direct and abstract halves of the film; it serves this function beautifully in that it is soothing an yet still progressive enough to retain your interest through this arguably confusing credit sequence.

While Sagisu used classical music in both the television series and Death & Rebirth, he far outdoes his previous endeavors by turning Bach’s Air on G into one of the most haunting battle songs ever produced and an otherwise harmless Jesus bliebt meine Freunde into a rather disturbing piece. However, the track which deserves the most attention is a little tune by the name of Komm, süsser Tod. German for “Come, sweet Death,” this song plays during one of the most pivotal scenes in the entire movie and represents quite possibly the most jarring musical juxtaposition ever fashioned. Based upon a poem Anno wrote himself, the song features a very upbeat and energetic rhythm set to lyrics expressing regret and a desire to commit suicide, which is eventually joined by joyous choir accompaniment – complete with clapping and laughter. While initially very distressing, Komm süsser Tod‘s contrasting nature is a perfect reflection of not only the scene for which it plays but also for the entire film experience as well.

Ultimately, watching something like End of Evangelion is not easy. It is a physically, mentally, and emotionally exhausting ordeal which was never created with your express entertainment in mind; such is the nature of not only the movie, but the series itself. If you are willing to sit down in front of the movie accepting ahead of time that you will be witnessing the climax to the most tortuous animated experience ever unleashed upon the public at large, then there is a very good chance you will enjoy the ride. On the other hand if you expect an action-packed and feel-good affair, you will be sorely disappointed. There are moments of action and moments of joy, but these are ephemeral occurrences tempered within the context of the greater tragedy unfolding around you. No one said this was going to be easy, and it is because the experience itself is not easy which speaks volumes on its merit. Simply put, there has not been another animated film that quite bludgeons a viewer so violently and sends them into an unrelenting free-fall of emotions which directly parallels what the characters on-screen are going through. Love it or hate it, you nevertheless will feel End of Evangelion, and carry the scars of the journey with you for as long as you enjoy anime.

And that animated, fictional characters are able to leave scars is what makes it – in the end – all worthwhile.