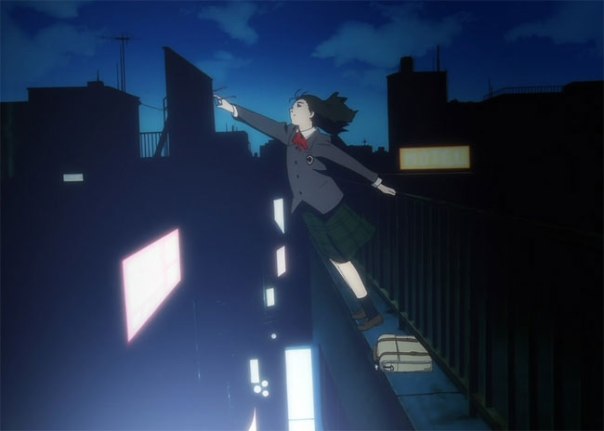 (Note: this review was written more than 10 years ago)

Serial Experiments Lain is not the sort of anime that you watch in groups on the big screen. Rather, Lain is something you watch by yourself in quiet reflection. The only action scenes of note across its thirteen episodes are two or three minute-long segments towards the beginning of the experience which serve to set the various subplots in motion. From there, Lain takes you on a melancholy yet contemplative ride of what it means to exist.

Lain starts off with a boy cryptically laughing, “Present day, present time.” In reality, Lain is set at least a decade or so into the future when the internet has been completely integrated into a single environment named The Wired. The storyline gets a running start when one of Lain’s classmates commits suicide. Three days later, all of her former friends start receiving emails – apparently sent from her – saying that she simply escaped from her flesh and is now living in The Wired. The story only becomes more intriguing from there.

What is also intriguing about Lain were the artistic and musical styles chosen. The art is very subdued, with little variety in colors and environments. This makes Lain feel more like “present day, present time” than it would have it were flashy and colorful. What is also unique about the art style are the little things such as how all shadows have swirling colors in them, and how power lines appear in just about every scene. The music is just as subdued as the art style. Indeed, the most common thing you’ll hear while watching Lain is the constant hum of the aforementioned power lines. While it might be thought to be annoying or perhaps “overused” as a style device, the constant emphasis on the power lines only underscores and highlights the world’s reliance on technology and The Wired. It should be mentioned however that Lain does indeed have some nice music when it does play.

Is Lain entertaining to watch? Yes and no. Lain is not entertaining in the ways that most anime viewers will be used to; there are no giant robots, gun fights, hostage-taking, or random murders here. Indeed, if your attention span is no longer than your ability to pop in a different anime, it is likely you will not enjoy Lain. For everyone else that is able to contemplate a future in which the internet has taken over nearly every aspect of people’s lives, and the dangers of such a future, then Lain will be a very enjoyable if somewhat short ride. I do not mean to suggest that if you fall somewhere in the middle between the two personalities mentioned you will not be able to enjoy Lain. In fact, if you are someone who is able to give any anime a chance to prove itself, it’s highly likely you will not only make it to the final episode but you’ll probably enjoy the series as well. It becomes bizarre around episode 8, but the ending is fitting and well worth experiencing firsthand.