← Choosing to Miss the Point
Questing and Interactivity → 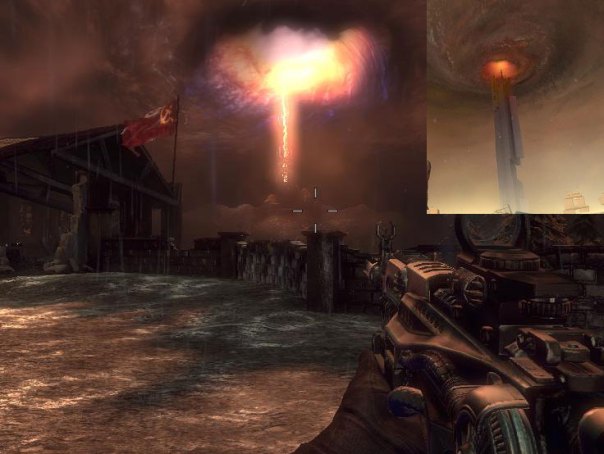 The lines between imitation, parody, homage, and plagiarism are as tangled as the plot.

Right off the bat, the one thing you need to know about Singularity is that Half Life 2: Episode 2 was released in October of 2007, nearly four years ago at the time of this writing. This is an important fact to consider as Singularity is not Half Life material, but is damn near the closest thing thematically we have gotten to it since Valve decided Steam made it so they did not need to actually make games anymore.

Although I am mentioning Half Life, Singularity actually has a lot more in common with Bioshock in terms of general gameplay. You start the game off as an American soldier covertly investigating a flare-up of radiation at an abandoned island in Russian territory. While there, a giant EMP blast knocks out your helicopter, sends you back in time to 1955, you muck up the timestream a bit, and you come back to the present while USSR super-soldiers and mutated time-beasts try to ruin your day. Apparently this was enough to make it one of the six nominees for the Writing Guild of America’s annual Best Writing in a Video Game, although the way those awards work out it’s like MTV picking the “best written reality show on our channel” (which is totally I Just Want My Pants Back).¹

The gimmick of this particular FPS comes in the form of the Time Manipulation Device, or TMD, and it serves as equal parts Bioshock plasmid and Half Life gravity gun. With a tap of the Q key, you can turn a destroyed weapon crate back into a nice ammo box, fix a set of collapsed stairs, or age a Commie soldier into bones and dust (or revert him to some primitive time mutant who attacks everything around him). There are even several sets of quasi-physics puzzles wherein you repair a box and revert it to crushed scrap several times to get through an area. The problem with the puzzles is like the “seesaw puzzle” in Half Life 2: once you’ve seen it, the cleverness fades when it suddenly starts showing up everywhere. And while it never entirely stops being fun seeing scraps of metal flying through the air and reassembling themselves into stairs, you cannot help but think that the TMD is less a device with multiple uses and more an elaborate Solve Puzzle button.

Nowhere is this sort of one-dimensionality more evident than in the pacing and balance of the game overall. The game is absolutely on rails, with doors inexplicably (and literally) closing behind you and more one-way drops I have seen this side of Super Mario Bros. In fact, pressing the F Key will activate a set of Chrono Footprints which will show you exactly where the rails are. That said, there are a number of side areas that you can briefly explore looking for E-99 canisters, which acts as a TMD upgrade currency, or even the blueprints for said upgrades. You can also pick up weapon upgrade canisters, but this is where the game starts to break down. Once you upgrade the assault rifle to Tier 2 damage (which takes a total of 3 weapon upgrade pickups), you are basically set for the rest of the game. You can use the TMD to age soldiers, or launch exploding barrels, or turn them into monsters, or trap them in a pocket of slow time… or you can just hit them with 2-3 bullets from your futuristic AK-47. There is a variety of enemies, but bullets never really lose their effectiveness at any point in the game. Towards the end, the game supercharges your TMD (hey thanks, devs, I just spent 10,000 E-99 upgrading it twenty minutes ago) to give you infinite energy… and I realized it was faster just shooting everyone than figuring out how to kill them with the TMD. 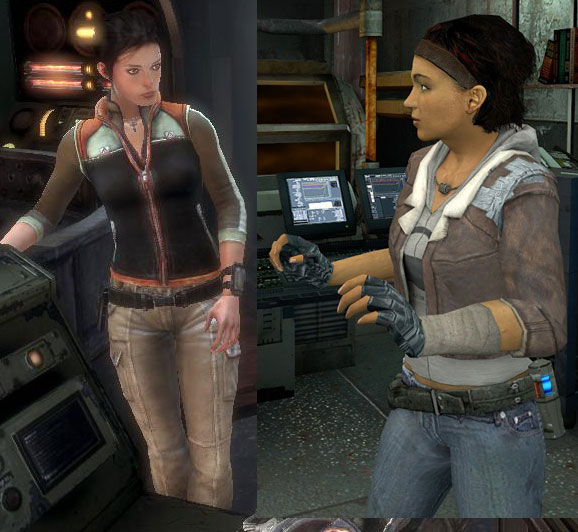 Oh, Alyx, I never knew you had a sister!

Overall though, Singularity was a solid 8-10 hours of entertainment, like a James Bond marathon that pleasingly passes the weekend with movies you’ve seen dozens of times before (yet rewatch every year). Little touches like the Seeker rifle that shoots bullets you can steer around corners in slow-mo, or the grenade launcher whose grenades can be remotely controlled in a similar fashion make this a title I would be interested in seeing get franchised out, just to see where they could go with a more extended narrative. Just maybe not at full MSRV.

¹ I have never actually watched that show, or any MTV show for that matter.

Posted on September 10, 2011, in Review and tagged Bioshock, Half Life, Singularity. Bookmark the permalink. Comments Off on Review: Singularity.

← Choosing to Miss the Point
Questing and Interactivity →