Review: The Binding of Isaac

The Binding of Isaac (hereafter Isaac) is a game that, strictly speaking, I should not enjoy. Indeed, I did not enjoy it at all the first few times I played it. But I did keep playing it, and once I sort of stumbled my way out of fifteen years of safe game design, Isaac rekindled a bit of that stubborn old-school gamer flame that propelled my younger self face-first into Battletoads hour after bloody hour.

This is what the first few hours will feel like.

Isaac plays like Smash TV from the olden days, with WASD controlling movement and the arrow keys controlling which direction you eject the streaming tears from your naked body at the merciless demons haunting your childhood nightmares. Map layouts and room contents are randomly determined each time you start the game, with the only consistency being the number of total levels, and there being Item and Boss rooms on every level (until the last few, which have no Item rooms).

As I mentioned, the game did not seem terribly fun the first few times. There is no quick-save, there are no checkpoints, and I got the feeling that I was lucky to even have a pause button. Death is permanent, none of the items you receive are really explained before you use them, many items can actively harm you in some way, some room setups are completely unfair, and it is both entirely possible and very likely that you will get screwed right from the very start with things only getting progressively worse.

Sometime around my fourth attempt, it suddenly all clicked: this is like Solitare. A game you play because you aren’t sure you want something heavier, a game that you don’t have an expectation to beat every time, and yet something you still find fun hours and hours later. 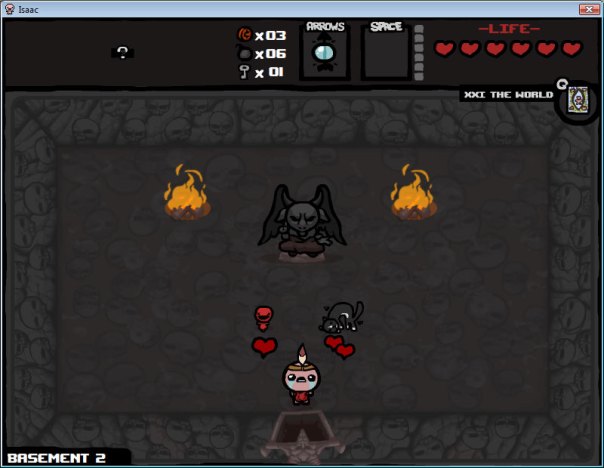 Isaac gives you plenty of opportunities to make bad decisions.

And I have indeed been having fun hours and hours later; 20+ hours to be exact. Although you never carry over items you accumilate, beating the game or getting specific achievements will unlock new items that are then added to the random roster, some of which will radically change the tenor of a particular run. I have a few more specific achievements to grab by beating the full game with different characters (basically different starting load-outs) before getting to the truly ridiculous “take no damage for X levels” kind, so it will be interesting to see if the game is still fun once those dry up.

But you know what? Getting more than 20 hours of game time in a roguelike, a genre that I was hitherto convinced I would despise on principal, is an absolute goddamn steal at $5.