According to Wikipedia, the Uncanny Valley is a hypothesis in robotics and 3D animation which holds that when human replicas look and act almost, but not perfectly, like actual human beings, it causes a response of revulsion among human observers. In other words, humans respond positively to human-like robots up to a point, after which our reaction to its failings is far more negative than would be towards a clearly non-human machine. Based on my overall experience with Torchlight, I firmly believe there is an Uncanny Valley of Game Design, which Torchlight cratered into face-first.

To call Torchlight a Diablo-clone is misleading; I would term it more a Diablo-mockery, although that implies Torchlight was intentional in its failings rather than simply being a cheap knockoff, like Chinese powdered milk laced with industrial solvents.

At first, everything is classical Diablo in a Warcraft 3 skin: isometric, dungeon-delving gameplay, hordes of monsters, loads of loot. There even appears to be a lot of improvements to the formula. The dog/cat companion makes the delving feel more homely. The three classes are actually modular archetypes, such as being able to make the “archer” into a rogue, the “mage” into a tank, and even the “barbarian” into a ranged magic-user. Four generic spell slots for your character and two for the pet let you do some interesting things to complement your own class abilities. I thought the Fame mechanic (Fame is like a second XP bar that only gives you extra talent points) was a clever way of making the killing of named mobs important without necessarily making you overpowered.

It was around hour six though, that I realized that Torchlight had not yet blinked its glassy, vacuous eyes.

There is no real gear progression in Torchlight. Let that sink in for a moment. I received an orange-text Unique neck item around level 4 that I was unable to replace for the duration of the entire game. Random stats are random, but when a random level 10 green is as powerful as a random level 30 green, the entire loot-centric nature of this particular genre collapses. The consolation prize mechanic is Enchanting, where you put an item in a box and have about even-odds that you paid someone 10% of your wealth to destroy said item. No, seriously. Find a decent weapon, put it in a box, pay ~1200 gold for a chance to add a random stat upgrade on it, a chance that nothing happens other than your gold evaporating, or an increasing chance your item gets disenchanted, completely wiping all its stats. The first item I tested this on got disenchanted on a 4% chance, and the second was an Unique-quality bow that was disenchanted on the first, 2% attempt.

I got an achievement for it. No, seriously.

Bum Luck: You installed this game.

Now it did occur to me that perhaps they were attempting something novel, a kind of re-imagining of the transitory nature of loot in Diablo-esque games. An upgrade isn’t an upgrade off the ground, but only after you “win it” from the Enchanter, or something. The problem is that whoever balanced this garbage was a goddamn moron. Enchanting costs gold. A lot of gold. The items you pick up off the ground never really increase in value the deeper you dungeon delve, such that each time you unload your haul in town you get the same ~2500g at level 10 that you do at level 30. Even Epic or Unique items sell for complete peanuts; the highest price I got for a sale was 1,809g for the level 4 Unique necklace I mentioned earlier, which the vendor turned around and was trying to sell for 82,432g. That’s right, instead of the typical 1/3rd or 1/5th cut you see in normal games, Torchlight is operating on GameStop levels of Fuck You resale value. If something could be worse than selling at 1/45th value, it would have to be the necessity of Transmuting four pieces of magic gear to turn into a random crappy gem, which needs to be transmuted with ~12 more crappy gems to get a mildly useful gem, to have something to put into the sockets of the level 8 shoulders you are otherwise never going to replace.

I am spending all this time talking about loot because loot matters in these games. Once you cease expecting any upgrades, the endless, nondescript corridors are filled not with opportunity or excitement, but are instead arteries clogged with the fatty plaque deposits of meaningless mobs. The original Diablo did not have much of a plot beyond “save us from evil” that I can recall, but the setting of gritty evil provided its own sense of gravitas. Conversely, Torchlight does not even bother. “Sidequests” are perversions of the term, and amount to simply killing mobs you were going to kill anyway slogging towards the stairs. Even worse, the “quest rewards” for these things are randomized green items. Look at this shit:

The thing I kept hearing regarding Torchlight was that former Diablo 1 & Diablo 2 designers worked on it. If their contribution to that series is at all representative of what I experienced in Torchlight, then all I can say is good goddamn riddance.

Well, that, and I have never looked forward to Diablo 3 more than I have now.

Orcs Must Die (hereafter OMD) is one of the best, purest non-Tower Defense… Tower Defense games I have played. The premise is simple: the orcs are at the gates, and you must stop them. The rest of the game follows a simple elegance undermined only by the limitations of genre conventions.

To be honest, OMD felt like it had more in common with the brilliant PS1 Deception series than it does with Tower Defense. You start off each level by choosing a limited number of traps from your collection, in addition to personal weapons/spells that you will be using to kill the orcs. Traps range from spikes that impale from the the floor, to arrows that shoot from the wall, to mechanized swinging maces from the ceiling, to archer guardians; weapons include Fire/Ice/Lightning/Wind rings, to melee battlemage staves, to your trusty magic repeating crossbow. Later on, you can further select from 1 of 3 “Weavers” for that level, whom act as mini-talent trees that boost your effectiveness in different ways. Once your arsenal is selected, setting up traps costs a set amount of currency from a limited pool that grows between waves and from your merciless slaughter of orcish hordes.

And yet OMD deviates from the standard Tower Defense genre in many key, innovative ways. The most obvious is the fact that your Ash-from-Evil-Dead character can (and must!) get down and dirty in the fighting himself. While certain trap setups essentially make victory guaranteed, you typically won’t have enough currency to set them up in the early waves, and certain levels contain too many chokepoints to trust to traps alone. The standard orcs will actually chase you around if you are nearby, which can buy you some time for allow for traps to reset. Moreover, there are some enemy types like the ogres (fire, ice, and armored varieties) whom are too tough for typical traps to kill outright, and the downright scary Gnoll Hunters who leap over your orc-stopping waist-high barriers and hunt specifically for you. 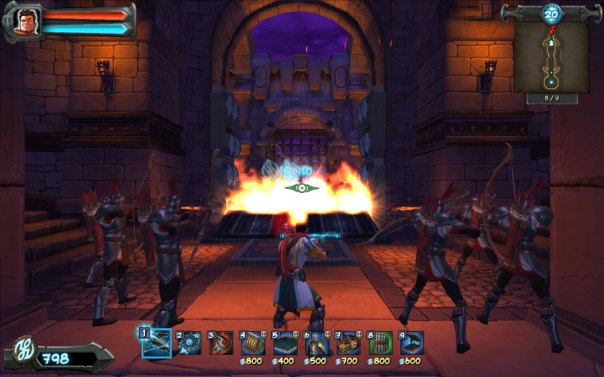 Ain't no one going home tonight.

The other area in which OMD forges ahead is in its rather brilliant, non-standard level design. In typical Tower Defense, everything is gridded out in neat, orderly squares. While traps require certain precise placement, I never got the impression from any of the levels that they were build specifically to place your traps “just so.” Fluted columns and flying buttresses foil wall and ceiling traps respectively, while floor traps cannot be placed on stairs. Any time I actually saw a 2-3 “square-trap-wide” corridor, I would get excited, like I won the goddamn architectural lottery rather than feeling this was exactly where the designers wanted my traps to go.

While there are some additional innovations like permanently upgrading traps by spending the orc skulls you earn based on level performance, OMD is unfortunately limited by genre conventions. I applaud OMD for not falling into the Tower Defense trap (har har) of simply increasing the HP of the enemies as a crutch for increased difficulty among waves, but after a while you will come up with trap setups that are essentially unbeatable. Much like in every Tower Defense game I have ever played, the slow traps (e.g. Sticky Tar Trap) are fairly overpowered; similarly, some traps and weapons feel too good, especially compared to others that don’t seem to have a place. I almost feel as though the game would have been improved if there was a mode or option to where you get a randomized list of traps, rather than entirely relying on level design to inform your decision. Or if there was some kind of incentive to utilize the “bad traps” in unique ways – since the Leaderboards are based entirely on points, I could imagine some kind of score multiplier for trying to use the Steam Trap or Push Wall Trap effectively.

Ultimately, OMD provides for some very enjoyable orc-killing and trap-setting Tower Defense gameplay. There is a Nightmare mode available for the masochists out there that hate more than 3 seconds inbetween waves, or you can try and top the Leaderboards on the traditional levels; the latter is actually fairly addicting when you have Steam friends who have the game, since their scores are highlighted in comparison to your own. Even if you are not interesting in replay value, the general play value of OMD is exceptionally high for what amounts to an inexpensive indie game.

This pack comes with two weapons and two traps. The Alchemist Satchel lets you toss down a sort of glass caltrop which you can detonate at any time with a right-click, by shooting it, or letting a trap trigger it for you; the explosion is huge and will one-shot every orc in range, making this a fairly overpowered weapon for the early game (before the later rings). The Vampiric Gauntlets essentially lets you drain health from whomever you are aiming at, while the right-click turns your own health into mana; overall, the effect is pretty weak compared to your other options. The Shock Zapper ceiling trap is ostensively for killing flying enemies, but considering it only triggers from enemies flying directly beneath it and the fact that flyers usually path nowhere near ceilings (nevermind that even if they did, there would be better traps for that) makes this damn near the most useless trap in the game. Finally, the Floor Scorcher is a combination mini-springboard/flamethrower that has made itself a staple of all of my setups. If you set a Floor Scorcher near a ledge but facing away, it will burn everyone in a horizontal line while launching whoever is standing on top off the edge. More importantly though, it is a floor trap with a ~3-square range, which allows you to layer on the pain.

I would never buy this DLC for the $2.49 normal price, but on a deep discount the Floor Scorcher alone might make it worth a purchase.

This pack gives you 5 new levels, at least one of which is a remake of a prior level (just in reverse), and the Mana Well. The Mana Well is a fairly expensive “trap” that essentially recharges your own mana bar when you get close to it. The extra levels allows you to get additional skulls if you want to upgrade more of your traps, but overall I was not entirely impressed with them. There is no additional story behind the levels or extra dialog, which kind of makes them feel extraneous. With a default price of $3.99, or over 25% of the cost of the entire game, you would have to be crazy to purchase this DLC outside of a 75% off Steam sale.