The Problem with GW2’s Questing

Reading some of the positive comments about Guild Wars 2’s “Explorer-friendly” questing, I cannot help but feel… confused. I understand that there are people out there that do not like traditional questing. That is fine. The problem presents itself when ArenaNet decides to go through the motions and try and placate those of us who like our themeparks to have, you know, themes. And let’s not kid ourselves: Guild Wars 2 is a themepark. Maybe one with a few sandbox rides, but a themepark all the same.

Rather than attempt to explain the problem again, and why it is a problem how ArenaNet is handling it, I am going to simply show you. My apologies to those with 16.6k baud modems. 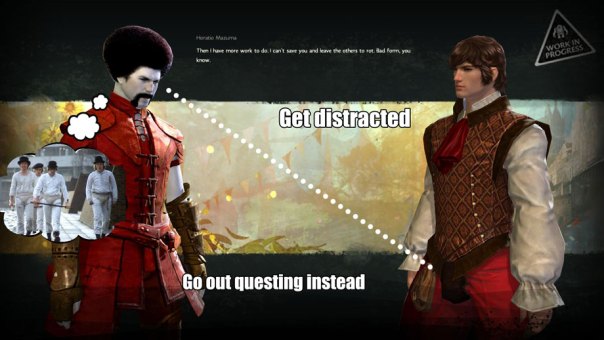 Step 2, decide you want to help farmers for a while.

Step 3, Get a little ahead of the curve.

[Edit: The following picture was accidentally left out of the series, and provides some much needed context for the remainder]

Step Missing Link, I have done all that you asked.

If the above is not immediately clear, I was looking at my map to see if there were Renown Heart quests undone in my endeavor to finish level 7 and start the next step in the Personal Story quest. The only available quests were set for level 8 characters, although I never saw what was down in the South-West. While it is possible to quest above your level, GW2 makes it abundantly clear that it takes levels very seriously – as evidenced enough by the fact the game will de-level you down to the “appropriate” level for questing to be challenging. [end-edit] 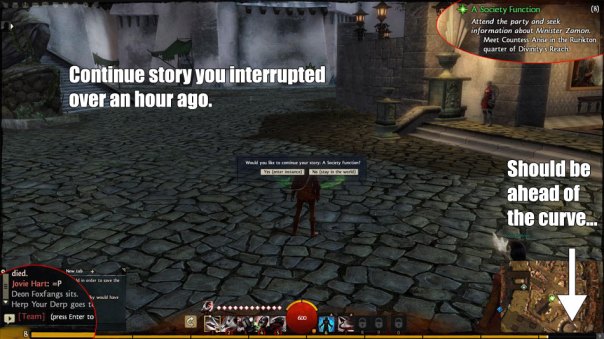 Step 6, Back to doing what you want to do. 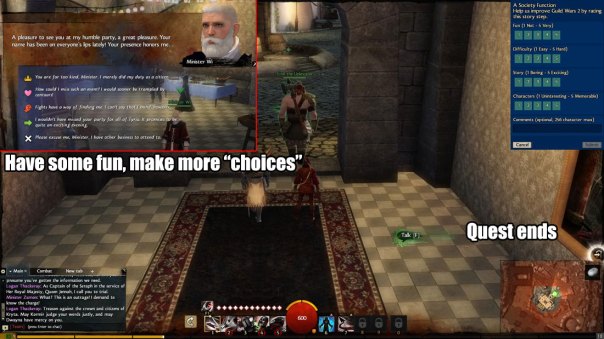 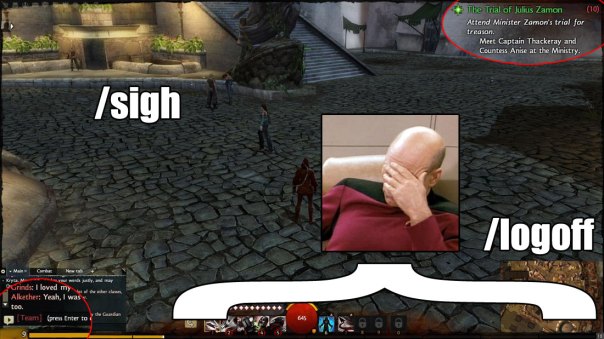 To be clear, I have nothing against an Explorer-based leveling game, or one that allows you to reach max level solely by PvP or chain-running Events or even grinding mobs. Hell, I do not have anything against strict sandboxes either, even if I do not play them all that much.

The problem here is one of coherency. The Personal Story thus far is perfectly serviceable, all the way up to the point where you choose to attend a dinner party and discover you need to go play outside for an hour for an entirely arbitrary reason, e.g. you haven’t leveled enough. As Keidot pointed out in the comments yesterday, it does make a certain amount of theoretical sense to structure the game this way. If you can level solely by the instanced Personal Story quests, what is the point of the outside world? Grouping them up better (instead of spacing each quest out by 2 levels) could potentially leave you performing nation-defining epic actions by level 10, diminishing the weight of your future exploits. Clustering them sounds good, e.g. 1-10 and then 15-25 (etc), until you realize that there had better be 5+ levels of interesting grinding/Event activities to participate in.

I do not have an easy solution to this problem. And believe me, it is a problem. It is one thing to be given a vague motivation to go out and do random Renown (aka Heart) quests, and be satisfied. It is quite another to be following a storyline and then be constantly interrupted to complete tasks that have nothing at all to do with the storyline itself. People talk about joys of not having to read quest text anymore, and maybe they even believe that, but this sort of textual background radiation is what differentiates the character and tone of one MMO against another.

And nevermind what this suggests more generally about the designers’ (future) abilities to pace their own content.