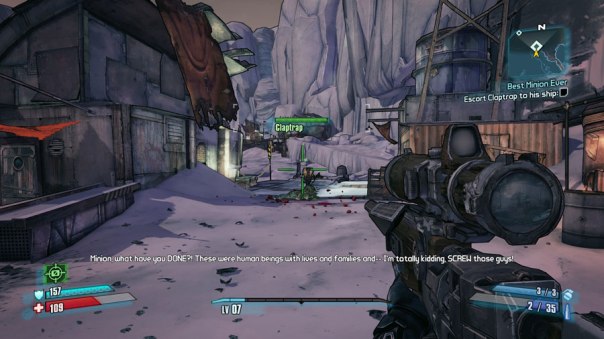 Some (most?) of the humor is a little juvenile, but some jokes had me rollin’ all the same.

Borderlands 2 is the cel-shaded, “why so serious?” smash-hit FPS pseudo-Diablo-clone follow-up to the original breakout Borderlands. Taking control of one of the four classes (or five with DLC), you set off on an adventure of mayhem and random looting across the now-much-more-varied landscape of Pandora, helping the heroes of the original game try and stop Handsome Jack from taking over the world.

To be honest, I am having a difficult time reviewing Borderlands 2 after having spent 130+ hours playing it. If you played the original, BL2 is better, longer, and more… Borderlandy than before. If you haven’t played Borderlands before, well, prepare to experience one of the frighteningly-few games out there with a distinct style. Said style might be nonsensical ultraviolence, but at least it is consistent and generally amusing.

The basic flow of the game will be familiar to anyone who has played a Diablo derivative: get quest, kill mobs, get random loot, repeat. There is a decent range and variance of mobs, but the AI controlling them is not especially robust; every encounter either involves mobs rushing to melee or shooting from range. In fact, since all the visible mobs aggro after the first shot and many mobs simply don’t exist until you get within range, an entire swath of the strategic playbook (Stealth, sniping) consists of blank pages. This is no different than what occurred in the original Borderlands, so if it was fine for you then, it will continue being fine now.

Not your standard quests. Well, they ARE, but still…

What saves BL2 can be summed up in three words: guns, guns, and guns. The trick that the Borderlands series pulls off is not merely emulating the loot-centric gameplay of Diablo, but how the loot itself can change how you approach the encounters. If a really kickass shotgun drops, for example, you might find yourself suddenly getting more up in psychos’ faces than you were just five minutes ago. While the character talent trees stamp down on this more freeform behavior by virtue of weapon-specific bonuses, respecing is only a trip to town away. And sometimes that minigun that shoots missiles is just too much fun to fire to care about trivialities like your +15% critical hits with sniper rifles.

Once you complete the game proper, you unlock “True Vault Hunter Mode” which allows you to redo the game from the beginning while keeping your level, cash, and gear. The enemies in this mode get new abilities, more health, and hit significantly harder as you plow your way to the level cap of 50. While this difficulty extends the life of the game quite a bit, it also leads into some counter-intuitive behavior. You see, sidequests typically reward you with unique items that are scaled to the level you were when you started them. Ergo, the “correct” way to play TVHM difficulty is to skip ALL of the sidequests until you reach level 50, and then go and complete them for the highest-level version of the unique items. Otherwise, the unique items may as well not exist, as they will inevitably be replaced by even the most generic level 50 drops.

As I mentioned before, I have clocked in over 130 hours into Borderlands 2, with around ~20 of those hours being from two of the DLCs. Although I chose to play solo the whole way through, I’m positive that the experience would have been even more entertaining with a group of friends. Hell, the DLCs even include the equivalent of 4-man raid bosses, if you are into that sort of thing. By the time you start to question why, exactly, you are chain-farming the last boss for legendary drops, Borderlands 2 will likely have generated twice as many hours of entertainment as your last non-Skyrim single-player games combined.

So get in there and start shooting some faces.