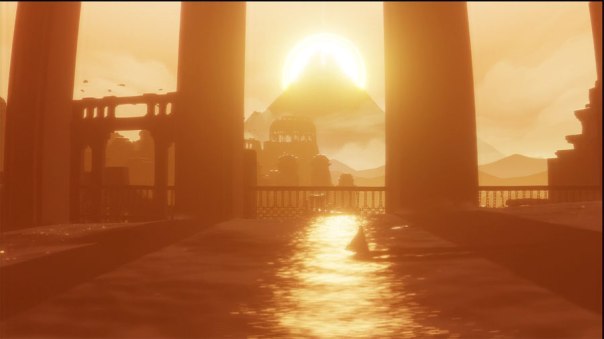 I do not even know where to begin with describing Journey. Perhaps the beginning? That always seems to work for most people.

Journey starts out as (and continues to be) the most impressive sand-simulator I have ever seen. Sliding down the first sand dune instantly transported me back into childhood, or at least as far as Super Mario 64. But Journey is not a platformer; it is an emotion, an experience. One that only gets more and more compelling as the minutes pass.

Describing your mechanical actions as you play the game almost feels like missing the point, but to not mention them would miss the point. Nearly every single thing about Journey is perfectly crafted. You move around with the left analog stick, and can pan the camera by either tilting the PS3 controller or using the right analog stick. In the opening desert-scape, you get some extra fabric added to your avatar’s scarf, which allows you to jump and glide for a few seconds. The only other button used is “O,” which lets out a little “energy chirp” or longer blast if held down.

That is it. There is no UI, no hearts, no power meter (aside from the scarf), nothing to distract you beyond the immensity and immediacy of the moment.

I felt more connected here than in most MMOs.

After the tutorial “level,” gamers connected to the internet will encounter perhaps the most sublimely executed feature in videogames: another human being. That sounds facetious, until you realize how often games treat other players as competitors, enemies, or judgmental peers desperately trying to foster virtual respect. Your fellow traveler in Journey is exactly that, no more, no less. Except… it is much, much more than that.

Remember when I mentioned the player’s scarf controlling the ability to jump? While there are items scattered around the landscape that add length to said scarf to further increase one’s hang-time, the ability to jump is always limited to how much of a “charge” the scarf has. One can only replenish this charge at certain locations along the map.

Unless, that is, there is another player around. Merely being in close proximity to a player with charge remaining on their scarf, will cause your scarf to recharge to full as they entwine. This is not a draining of power, but rather a creation, a resonance. Similarly, the sort of “energy chirp” players can do will also charge your partner’s scarf if they are in range.

I am spending so much time talking about this because the way Journey fits together as a whole led me to one of the most intimate experiences I have had in videogaming – all without voice, text, or even names. I felt connected to this stranger, as we slid down sand highways and soared above the dunes while alternating our energy chirps. I had a suspicion that my anonymous partner had played this game before, but he or she seemed tolerant of my exploratory inclinations. If they wanted to direct my attention towards something or indicate that we should give up on trying to get that tricky scarf-extension orb, a series of chirps was enough. Of course, as we traveled, I would occasionally chirp to keep up his/her power level, and after a while I think he/she realized what my seemingly random chirping accomplished (and then returned the favor).

There’s more than just desert, but seriously, I don’t want to lessen the experience.

I am not going to talk any more about the rest of the game and the environments explored, both to avoid “spoilers” and because the game itself is only 2-3 hours long. But suffice it to say, it’s brilliant. Absolutely, devastatingly, goddamn brilliant. And I haven’t even talked about the music, which is universally praised and adored. And have I mentioned the visuals? I believe I have, but they too are striking and sublime – there were a few moments during Journey at which I seriously considered buying a $150 video capture device solely to take screenshots of this one game.

Sometimes I struggle with these shorter, more artistic games insofar as how much they are really worth. A game like LIMBO can be amazing (and it is), but spending $15 on something you finish in a single sitting? Perhaps I should have waited for a sale there. But with Journey I do feel it is enough of a novel experience to be worth skipping one night out at the movies to play. Not to mention it comes with two other games, although I have not yet played them. Possibly all combined they could make a full MSRP ($30) worth it. Even if it is just Journey though, anything more than a 25% sale means this bundle will be worth it on the strength of Journey alone.