The strategy bits weren’t bad at all.

What I recognized early on was that I had not actually played many “strategy” games before, as opposed to more tactical affairs. The underlying mechanics were fairly simple: units can move and attack each turn, all units have 10 HP, sometimes there are special abilities or perks that can come into play, units gain XP and levels, and you can move your entire team each turn. When all the moving pieces come together however, you begin to realize how much the odds are against you on each and every map.

Allow me to present an example. During your turn, you move your spearman up to attack an enemy unit. Before committing to the attack, you see that you will deal 5 damage and take 2 damage in return. During the attack, the damage numbers were actually 4 and 3 – the projected numbers are simply the average range. The damage a unit takes is counted as either wounded or dead, with the spread being determined by perks and… well, I’m not actually sure how its counted. I noticed higher level units take more wounds than deaths, so I’m sure stats are somehow involved. Regardless, your now-7 HP unit will deal less damage than that same unit at full health. On your next turn, you can choose to order that unit to Camp, which will heal all wounded (not dead) units, at the cost losing both its attack and move phase.

Another wrinkle is morale. Units attacked below a certain baseline will Break, reducing their attack and defense scores by 4 until they Camp, while also retreating a hex away. Even units that do not Break will retreat a hex back when low on HP. This can wreck havoc with your plans should you attempt to attack with two units, only to have the first attack send the enemy out of range of your follow-up. This can lead to some odd behavior, like attacking with your weakest units first, probing for the breaking point, before sending in the big guns to hopefully annihilate the unit.

Then you have the hero/monster units, which can heal to full all the time. Then you have magic spells, which have unlimited ranges by only 1-2 charges per spell. Then you have terrain bonuses/penalties. Then you are picking one of three Perks for each level a unit gains. Then you are sending units around the map looking for artifacts that you can equip to give certain units more abilities/stats. Then you realize you often have a time limit to complete the map. And so on.

While the game was surprisingly strategic and all, literally everything else was forgettable. I have not dabbled much in the strategy game genre, but I know enough to know that there are likely better titles out there to buy. I purchased Elven Legacy at some ridiculous discount a year or so ago, and it is probably only worth that much (or less). It was fun while it lasted, but it really only succeeded in me wanting to look at other strategy games.

Note: I purchased the DLC along with the normal game, but was unable to get any of said DLC to actually work. The new campaigns showed up and were selectable, but none of the dialog or win conditions or any text was visible. 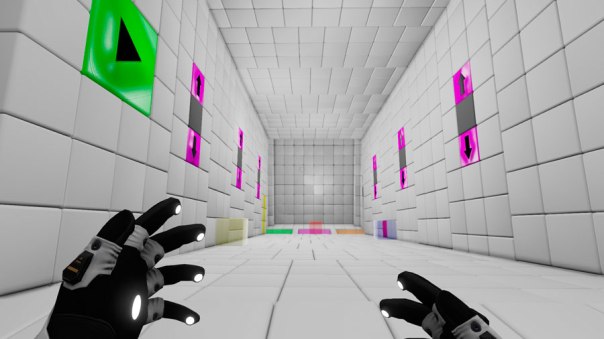 Aesthetically, it was quite nice.

QUBE is a first-person puzzle game in the Portal tradition. In fact, basically all you need to know is that QUBE is Portal-lite. Throughout the game you can manipulate the behavior of a series of colored cubes that have standard behavior: red ones extend out one square at a time to a three-square distance, yellow ones make a step-ladder patterns, blue squares act as spring-boards, etc. Actually, why stop describing them now? Purple cubes rotate a section of the wall/floor, and green create either a block or ball, depending on the puzzle. Oh, and there are magnet walls. There, that is 100% of the set pieces.

While all this sounds simple, QUBE veers into some ridiculously fiendish puzzles before the end of its ~4 hours of gameplay. At one point, you have to solve a puzzle in the dark, with only one element at time being lit up. Another requires the fine manipulation of otherwise inert cubes of differing sizes by using magnetic walls. Yet another requires the navigation of a sort of Wheatley-esque robot that only makes right turns through a maze.

Grab QUBE as part of a bundle if you can.