As you may or may not be aware, there was a bit of RNG controversy in a recent Hearthstone tournament. Heading into the tie-breaking Final match, the following occurred:

But as the match started, something immediately went quite awry. During the first turn of the first game, Doge House coined out a Nat Pagle. And so the scene was set for the most RNG-dependent series Hearthstone had ever seen. […] The final tabulation of RNG is shown below with perhaps the most staggering statistic being the Nat Pagle procs. Throughout the series, Doge House received eight out of a possible eleven cards from Nat Pagle while Liquid Value received only one card out of a possible seven. 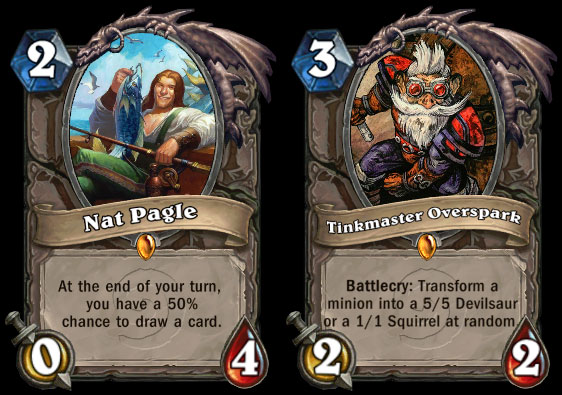 You can watch the offending match here. The RNG of Pagle was set in particularly harsh relief considering both players played one in the opening turns of the game, but only one side seemed to draw any cards off the ability. That prompted a rather lengthy, if compelling post by @TL_Monk detailing the negatives of RNG generally. Indeed, the case becomes even more reasonable when he compares Blizzard’s somewhat sophomoric (in comparison) responses thus far with those of Mark Rosewater, head developer of Magic: the Gathering.

So, RNG is bad right? Well… maybe. It’s worth noting that despite the final tournament game being a blowout in terms of coinflips, the Mage still could have won by a single top-decked Fireball. Had his own Pagle had a comparable draw-rate as his opponent, he would have won easily. And that’s sorta the thing.

This is the counter-point post on Reddit, talking about randomness and the overall RNG aspect of certain cards/situations in Hearthstone. The post itself essentially states that RNG is good for the game for precisely the reason why people think it’s bad: it allows a chance for weaker players to win. Without RNG, the outcome of every encounter is based on the skill of the players which, while fair, ultimately means you will never have a shot at beating someone better than you. The post goes on to assert that another card game tried the no-RNG approach and was never able to reach critical mass because it chased all the middle-tier (and lower) players away.

As an aside, Nat Pagle’s meteoric rise in use is perhaps the best possible demonstration of unintended consequences, as it was a card virtually unknown before the nerf of Novice Engineer (which used to be a 1/2 creature). Of course, Pagle was also previously bugged so that the card draw only occurred 25% of the time instead of 50%, so perhaps that had something to do with it as well.

How I feel about the subject is mixed. As someone who has some small measure of confidence in my gaming abilities, I dislike RNG. Then again, I also believe that a component of skill is being able to take RNG into account when making strategic decisions. The sensible line between good RNG and bad RNG people usually take is when the entire outcome of a match comes down to a single coin-flip. I agree that that is exceedingly lame, but… well, what is a card game if not already a series of coin flips?

I was watching one of Trump’s streams where he had two creatures out against a Hunter who just played Ragnaros; if the Ragnaros hit Trump’s face next turn, it’s likely he would lose. Between a Fireball and creatures on the board, Trump could have outright killed Ragnaros, but he instead chose to dump his hand of creatures to reduce the odds of Ragnaros’ random 8 damage attack of hitting him in the face. Trump went on to win the next turn once Ragnaros hit a random minion, but would the game have been less strategic if it killed Trump instead? I might suggest that that particular game would have been less strategic without the RNG factor, because the correct moves would be more obvious. In this sense, the RNG is simply another manifestation of risk and dealing with imperfect information, just like when playing creatures when your opponent might have a board clear in hand.

If you want to see some of Trump’s RNG surfing, it’s tough to go wrong with this one.

When it comes to Nat Pagle specifically, I do sorta agree with the detractors: it’s a boring card. I have one, and it’s a no-brainer card that goes into just about every deck. Worst case scenario, Pagle draws nothing and is a 2-mana 0/4 taunt that trades with removal. Best case? It’s ridiculous. Indeed, it reminds me of the “good design on paper, bad design in practice” card Fact or Fiction in Magic: the Gathering. There was never any reason to not use it in every deck that could support the mana cost – so much so, that it was banned/restricted in the older formats for over nine years.

For the time being, my opinion on RNG remains mixed. Randomness provides variance that would not otherwise exist, pretty much by definition. Random loot extends the life of a gearing game. Random layouts and outcomes are a fundamental principal of rougelikes. All (?) card games feature randomness in terms of what cards are drawn and in what order. And I’m still largely fine with people rolling the dice with a Ragnaros attack. At the same time, I do feel sheepishly guilty whenever I drop a Mad Bomber that manages to kill their 3/2 (or 2/3!), because damn that sucks for them. 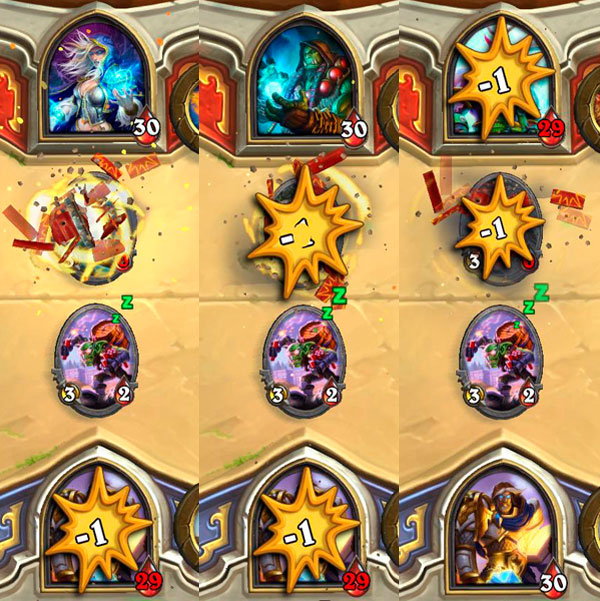 At this point, I play this card solely for the stories.

I suppose in the final analysis, it really comes down to the sort of tone the designers are attempts to set. There were a number of coin flip cards in Magic’s history, some extremely important ones in fact, but they never really felt “right” for the game. As pointed out in the Reddit thread, that most likely was because Magic already had a randomness factor of whether you drew a good amount of lands when you needed to vs getting mana-screwed/flooded. In Hearthstone, there simply isn’t any RNG beyond what cards you draw, and what the cards do themselves. Having a lot of cards with random effects thus provides that sense of variance instead of inevitability in Hearthstone, even when it occasionally feels worse.

Do cards like Pagle make Hearthstone a worse e-sport? Possibly. But consider this interview with the senior e-sports manager at Blizzard, Kim Phan. Most sites focused in on the news about there being a Spectator Mode in Hearthstone’s future, but I was most struck by the fact that, prior to BlizzCon, the senior e-sports manager had zero understanding that Hearthstone would develop into a credible e-sport in its own right. In fact, she even downplayed it a bit in that interview, despite Hearthstone tournaments being played in the background. So, basically, it’s entirely possible that we’ll see less RNG cards going forward if Blizzard decides e-sports is a path it wants to go down with Hearthstone. Or, potentially, we could see a doubling-down on the “for fun!” casual mechanics that get so much ire in competitive play.