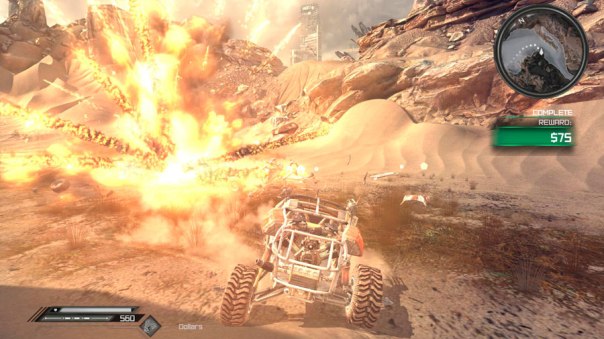 What you’ll be doing most of the time.

RAGE is a simplistic, 27gb racing game with some FPS bits tossed in.

Perhaps that is not entirely fair. If you include all the time you spend backtracking through the same exact environments, Halo-style, the game probably comes out to be 51% FPS or thereabouts.

In RAGE, you take control of a mute super-soldier who just woke up from cryo in the post-apocalypse future. After being rescued from some blood-thirsty raiders, you join the most generic-named faction in the world, the Resistance, to fight against the second-most generic-named faction, the Authority. Apparently the “Ark” containers (like the one you were on) were all supposed to be opened at the same time to usher in a new age of civilization. Turns out other Ark survivors somehow stopped that from happening, thus establishing themselves as rulers over the populace that apparently didn’t need space technology to survive the apocalypse.

Technically the above is a whole mess of spoilers, but considering there is literally no other plot, no character development, no competant writing, or really any redeeming factor for the game, it becomes necessary to work with what you got.

The set pieces can be kind of cool.

I take that back. There is precisely one thing RAGE got amazingly correct: melee enemies that are legitimately scary. The typical FPS that features melee enemies usually has to rely on them being bullet sponges or incredibly fast to compensate for their lack of cover-usage. In RAGE, melee enemies dodge back and forth, run up the walls, swing from ceiling fixtures, and otherwise make you reevaluate your damn-near-futile attempts at shooting them in the head. While I’m sure a lot of their acrobatics came down to heavy environmental scripting, it’s still something I’d like to see in games going forward.

What I would not like to see ever again is such a piss-poor implementation of damn near everything else. Little things start to grate on your nerves, like how pressing Esc brings up the main menu instead of canceling out of the Tab menu. Or like how you can hit Esc, choose Quit Game, and then it takes you to the Title screen where you have to hit Enter and then Quit Game again just to leave. Or how you have the ability to jump in the game, but not enough height to actually jump over anything 99% of the time.

I can appreciate the devs rebelling against the “only carry two weapons” FPS headwinds, but out of the nine weapons, eight of them have at least one extra type of special ammo. The crossbow carries normal arrows, explosive arrows, electric arrows, and mind-control arrows. Cool… except there is exactly one stage that allows electric arrows to do anything special (the stage they’re introduced in), and the vast majority of the enemies you fight after getting mind-control arrows are either immune to the effects or infeasible to use against.

In the end, RAGE doesn’t know what it wants to be or to do, and neither do I. Well, other than wishing I was playing something else. If you can grab it as part of a bundle, it’s worth checking out the legitimately scary melee enemies. But I wouldn’t necessarily give up a box of Girl Scout cookies for the privilege. 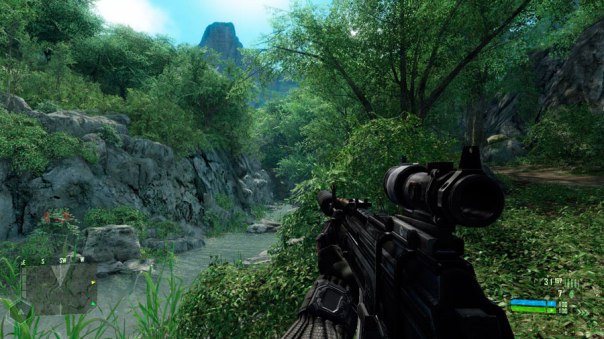 Crysis came out in 2007, nearly seven years ago, and was the long-reigning benchmark of PC gaming everywhere. Not necessarily in terms of gameplay, but literal benchmarking – if your rig could play Crysis on High, you were hot shit back in the day. Crysis 3 was out for months before I acquired the original in some Steam sale or another, but I wanted to give the original its due, especially considering I finally had a computer (in 2012) that could run this beast.

Unfortunately, Crysis on Steam caused me considerable issues. I honestly cannot begin to recount exactly what steps were required, but I know some modding and 3rd-party downloads had to be done before the game would even boot up. Even when it deigned to boot, I experienced a C2D event roughly every hour or two on top of game-stopping bugs like missions not ending correctly.

Outside of those issues though? Damn, people weren’t kidding about the graphics thing. I mean, the game basically looks kinda like Skyrim, but Skyrim was released in 2013.

What I was really surprised by was the general gameplay though. Crysis is a FPS game where you control an elite soldier equipped with a nanosuit that has a handful of alternate abilities like cloaking, super-strength, super-speed, etc. Unlike perhaps every other game in existence though, you get all of those abilities right at the start. Indeed, most of the game consists of you getting a primary and secondary objective on a large map and being told to hop to it; the pseudo-nonlinearity really reminded me of the original Far Cry. This leads to the game feeling rather easy though, as for the most part you can abuse Cloaking and jungle-hiding to take out basically every enemy in the game, especially considering the suit provides regenerating health.

Overall, Crysis is FPS in which what you do in the first 30 minutes of gameplay is the same thing you’ll be doing in the last 30 minutes of gameplay. The graphics and environments are phenomenally well-done, but I’m not entirely convinced it would be worth the headache of installation unless you want revenge on its at-the-time insane PC requirements.

That 15-tower limit is fun in multiplayer, let me tell you.

The original Sanctum, along with Orcs Must Die that was released around the same time, really sparked my interest in Tower Defense as a genre. Prior to that, Tower Defense was just associated with those annoying missions in RTS games that always seemed too hard or too easy. But Sanctum? Here is Tower Defense where you can not only build the maze yourself, but actually get down and dirty with shooting the bad guys. And multiplayer! So fun.

It’s just rather unfortunate that Sanctum 2 ended up being the sequel.

I have not even bothered to investigate it, but Sanctum 2 <i>feels</i> like everything that goes wrong with console ports of otherwise great PC games. There are four characters to choose from, each with various innate abilities and a main weapon that cannot be swapped out. Want to use the Sniper Rifle and Missile Launcher? Nope, that’d be too complicated. Instead of getting a pile of resources and having to carefully consider their application – do I build an extra-long maze, or upgrade all my towers? – you specifically get X number of wall units and Y amount of resources to apply to 15 deployed towers maximum. Oh, and everything is a tower now; there aren’t any floor traps (unless you count landmines). 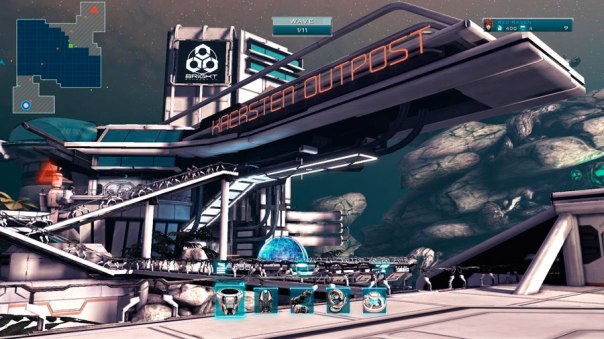 Four walls and 400 resources? Gee, thanks, I’ll get right on this maze.

I can understand the logic behind most of these changes, as it pretty much universally speeds up the matches. “You can build 8 walls and drop maybe 2 towers this round, good luck.” I can wrap my head around breaking characters into distinct classes, as perhaps a way to foster more teamwork. The designers even took the time to introduce a Perk system to allow a bit more customization with characters. And hell, the ability to voluntarily buff enemies (sorta like in Bastion) to gain more XP is a pretty clever difficulty switch.

But at the end of the day? The game still felt like a truncated console port. I found a rather ridiculous combo of perks and weapons early on and sailed through the game with the exception of a few maps that had surprise bosses in them (most of which can simply destroy your maze walls). The tension between adding more walls or more towers afforded a surprising amount of strategic depth to the original game, and it’s simply absent here. In short: a lot of the things that were fun in Sanctum are replaced with either not-fun things or simply missing altogether.