← Is Crowfall an MMO at all?
PAX Day Zero: Schmoozing →

In the comments yesterday, Scree disagreed with my prediction that Crowfall will have a major “3rd/4th/Nth Faction” problem, saying:

Further, players aren’t going to “give up” as the world draws to a close. In fact, your likely to see just the opposite based on Crowfalls Kickstarter Update #6 which indicates the materials you’ve gathered during the campaign… only a percentage of these transfer over to your Eternal Kingdom. That percentage is based on how you did during the campaign. You want to give up because 3 days are left? No problem, I’ll be happy to move up in the rankings and get more loot.

According to the Kickstarter, the most generous map type allows you to keep 30% of your scavenged goods upon a loss. In the next best world-type, there are 6-12 factions with (presumably) only one winner; the rest are stuck with 25% goods, maximum. It gets worse for the losers from there.

In fact, given how you need to physically haul your loot to the “Embargo area” to bank them – and the Devs even point out how nice of an ambush spot this is, implying either full or partial looting of your corpse – it might be that the winning side simply camps that area too and you are left with whatever you can squirrel away at 3am on a Tuesday. The kicker is that right now the Devs are saying that what loot gets saved at the end is actually random:

Spoiler alert: that’s a terrible idea and will be changed.

The “fix” Scree mentioned in the Kickstarter update is that these percentages are scaled based on your personal performance in the overall battle, including either time spent or when you entered the map (it’s not clear which). This does indeed prevent or at least discourage people from being able to hop into a winning map that is almost over and reap the higher rewards.

However, it does nothing at all in encouraging people to continue playing a losing match. 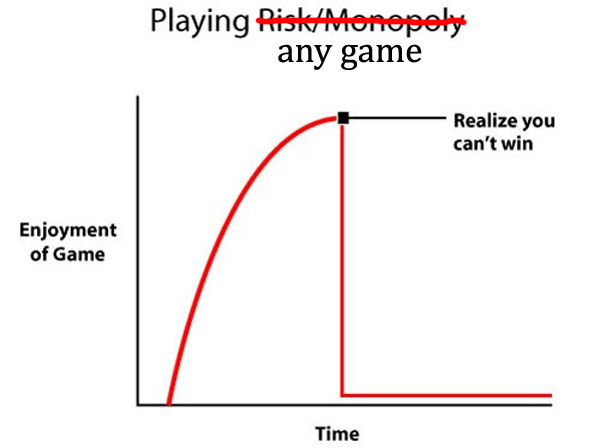 The problem is simple: opportunity cost. Scree indicates he/she would be fine with me dropping out, as that would make his/her rank go up in the process. But who is really going to be fighting tooth-and-nail for the maximum value of the 25% pie? That would be crazy, especially if I could earn 35% by half-assing a winning map.

There are really no good solutions to this problem, and plenty of ways to make the problem worse. And Crowfall seems poised to do exactly that. For example:

The easier it is to exit a losing map, the more people will do so. As near as I can tell, Crowfall does lock you into a Campaign when you zone into one. I have been unable to quite tell what exactly that means though. Are you locked into that particular map type, but can go elsewhere? As in, can you go into a God’s Reach map and also a The Shadow map? Or are you locked totally down, such that your character ain’t going nowhere for the next three months? The latter might seem the most logical, but take a moment to really absorb what that potentially means to your day-to-day gameplay. You could be stuck in a shitty strategic situation and/or gametype for nearly a quarter of a year, grinding away for that 30% payout months from now. How excited are you for that?

Don’t worry too much though, because the concept of alts lets you easily bypass the restrictions and bail out of the failboat. Is your main doing poorly? Hop on to whichever of your two alts are doing better. Indeed, there is no rational reason to even have a main, considering:

This is actually the current Crowfall design. With the resources you gather in these maps being Account-Bound, it actively encourages you to cheese the system via alts as much as possible. It would be dumb to fight hard in a losing battle on your main if you could sail to an easy win on an alt – all loot goes into the same pile at the end, which means your main will benefit just the same.

I’m honestly shocked that Crowfall is heading down this route, especially given how prevalent the alt issue is in other games. I don’t normally believe conspiracy theories, but it’s hard to argue against the notion the Devs are doing this precisely to sell more subscriptions (for the multiple character passive skill gains) by making alt-hopping the best way to play. Put all three character slots into three different maps and play enough on each to get some middling reward, or extra hard on whichever map is a winner. If you have a subscription, you lose zero progress on any character by playing this way.

So what are some potential fixes? Well… there’s not many due to the nature of Crowfall’s design. Alt-hopping isn’t much of an issue in games like EVE and Darkfall precisely because the world is persistent and corps/guilds will likely vet your character to prevent spies. Then again, most EVE players have multiple accounts in the first place, so… maybe not the best example. People drop out of short-lived BGs in other MMOs all the time (and are punished by timers), but since the rewards are tied to the character, there’s not much of a point to switch to alts; switching factions for a win isn’t possible because you’ll never get back into that specific BG anyway.

Crowfall’s uniqueness is this regard presents a uniquely difficult problem.

What is realistically going to need to happen is for the losing (or even just disadvantaged) side to be rewarded with something else. Someone in EVE might fight for pride or survival, but Crowfall’s worlds are temporary. Someone in WoW might realize it’s faster to stick out a lopsided WSG match than the Deserter timer, but Crowfall’s fail states could last weeks. The people making a protracted, futile last stand in Crowfall need to be earning either bonus XP or skill points or perhaps another currency akin to Honor to make their time losing worthwhile.

Otherwise we might just see an emergent, Tol Barad win-trading situation all over again.