← VR At Any Price
Inconsistent Resolutions → 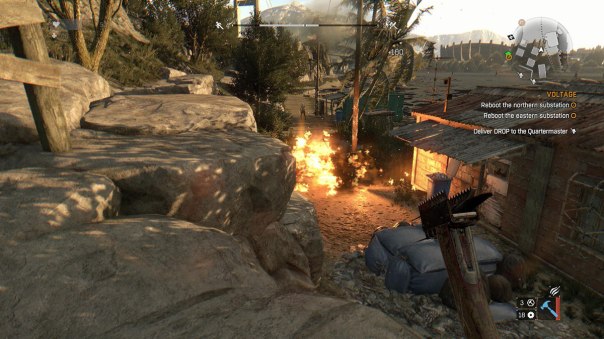 Environments that, for the most part, don’t feel contrived.

Dying Light is a less gamey Dead Island meets Mirror’s Edge. In other words, it is a zombie game in which you spend less time killing zombies for XP and more time parkouring along the rooftops to avoid them… for XP. It’s a game of movement, momentum, and generally avoiding battles wherever you can. Or mowing through zombies if you feel like it. Either/or.

The premise of the game is that you are a lone GRE agent sent into a zombie quarantined zone in an effort to resolve a rogue agent situation before it gets (more) out of control. In the process, you help people, sometimes not help people, and otherwise play Dead Island again. By which I mean collect crafting material and blueprints so you can craft increasingly unlikely weapon mods to help you separate zombie heads from zombie shoulders. There aren’t zombie health bars or numbers popping up after each attack, but we all know that they’re there, right beneath the surface. Especially once your badass electric katana inexplicably no longer one-shots random Biters.

Indeed, if there was one element from Dying Light that I felt fell flat (beyond the ending), it was the actual crunchy gamey bits. I enjoyed how the Skill Tree system was segmented into independent categories – you level up Power by fighting, Agility by parkour, and they have their own trees – but the crafting part was straight lifted from Dead Island, and otherwise felt out of place. Why is this Chef Knife dealing more damage than a Fire Axe? Oh, right, because the Chef Knife is purple. That didn’t bother me in Dead Island because I saw a cascade of “150 damage” pop-ups after throwing a Molotov, but it’s damn weird here.

Also, I hope you like the Fallout 3/4/New Vegas lockpicking minigame, because you’ll be doing that approximately a million times. Luckily, it becomes increasingly not worth it. 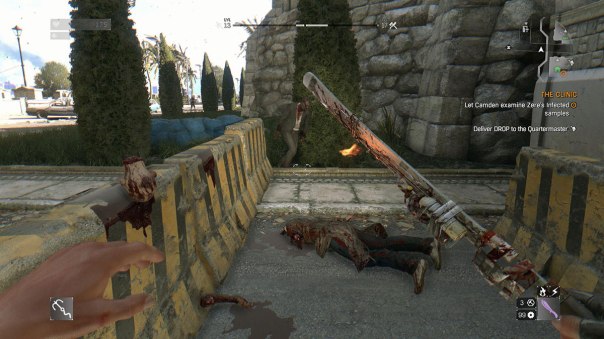 Conversely, this sort of thing rarely gets old.

Mirror’s Edge is the comparison everyone makes to any game that features parkour, but I must say that Dying Light gets the feeling closer than most. A lot of the more interesting maneuvers are gated behind level unlocks – including basic stuff like sliding – but even from the start things feel real good as you scramble on rooftops and vehicles. Indeed, once you start unlocking the rest of the tree (along with the grappling hook), you’ll start to feel like part Neo, part goddamn Spiderman. Even after 30 hours, running at a dead (har, har) sprint and vaulting onto a rooftop from the shoulder of a zombie trying to grab you never gets old.

One of the biggest gimmicks of the game is the Day/Night cycle, where especially overpowered “Volatile” zombies comes out to play. What is so curious about this is how utterly optional it ends up being; every Safe House features a bed, which you can freely use to skip Night segments, even when it doesn’t make much sense (e.g. something bad is happening in the next 24 hours… or next month, if you just want to sleep a bunch). The game makes a token effort to get you to venture out at Night via sidequests, but for the most part I ignored it. At least, I did until I unlocked the Grappling Hook and the “Camouflage” skill, the latter of which in particular removes basically all danger from Night escapades.

Overall, I enjoyed my time with Dying Light. If you were someone who didn’t enjoy Dead Island, Dying Light is probably different enough to make it worth your time to try it out. Then again, since I’m one of those apparently crazy people who enjoyed Dead Island in the first place, it’s tough to be objective. All that I know is that it’s going to be difficult going back to any zombie game that doesn’t allow you to scale walls and Spiderman your way around town.

Or if I’m honest, any open-world game.