The fourth quarter results are in for Guild Wars 2: 34,903 million Won.

What does the above tell us about the health of GW2? Well… there might be cause for concern.

Revenue for the two quarters encompassing Heart of Thorns was 67,888 whereas Path of Fire is 55,048, a decline of about 19%. A more concerning factor, IMO, is how these last two quarters encompassed the release of mount skins in the Gem shop. Based on anecdotal evidence, e.g. in-game observation and Reddit threads, the mount skins have been one of the most lucrative additions to the Gem store in months. The Gliders released in HoT were cool-looking, but only seen when, you know, actively gliding. Meanwhile, people are on their mounts a good 90% of the time these days. There are 50 total mount skins, and even if ArenaNet severely bungled the distribution thereof, it’s clear that they are hot items.

Despite that, the 4Q17 results barely moved from where they were in 4th Quarter 2013. 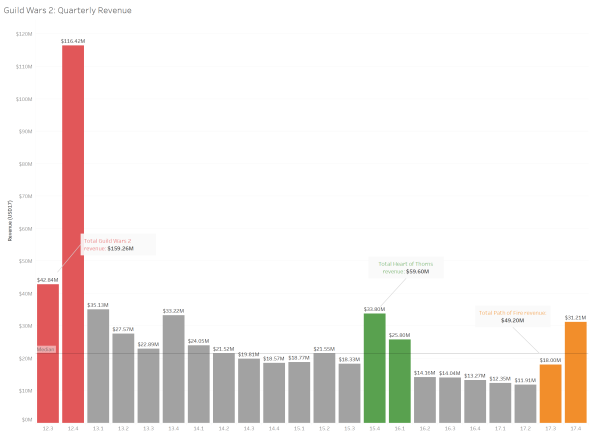 Having said all that, the situation is not dire per se. If you enjoy GW2 as I am at the moment, there is no particular reason why you could not continue for quite some time. Even with a lower player population, you are unlikely to notice a decline, as players are funneled together into event zergs, and the Diablo-esque loot (99% useless) pinatas keep the dopamine high.

What we are likely to notice is exactly what we are seeing today: a renewed focus on fiddling with Gem Store items and services. The Mount skins were a start, but have continued into the Black Lion Chest “upgrade.” The Fashion Wars endgame remains largely P2W, with rewards for actual content-clearing relegated to the junior varsity artists. And everyone is fine with that since there is no “power” being sold… only motivation. And besides, if you farm enough gold and convert it into gems, you can reap the rewards yourself!

The funny thing about it all is the fact that while you can purchase Gems with Gold relatively effectively over time, the biggest cut for GW2 is actually the Gem to Gold conversion. For example, as of the time of this writing, the conversation rate is 100g = 356 gems. However, if you wanted to buy gold, the conversion is 19g per 100 gems. So, basically you get only 2/3rds of the value buying gold. This means that ArenaNet should probably be encouraging more tradable (and thus sellable on the AH) items, rather than a laser-focus on Gem Store exclusives.

As an example, the legendary greatsword, Twilight, is currently selling on the AH for 2750g. If I really wanted that item right now, I would have to buy 14,474 gems and convert it to the necessary gold. That’s $180.92 worth of gems as of today. Or I could decide that that is absurd (it is), and start off on a journey to craft the Legendary myself, which could be a year-long endeavor that requires touching every part of GW2’s content.

Or, you know, buy an similarly cool-looking greatsword (or bow) skin off the Gem store for like $10. Either/Or. It is becoming increasingly apparent which one ArenaNet would prefer.