In the comments for Unleash the Rage, Rohan and I had a little back and forth on whether or not I could have handled the Unleash the Hounds situation differently. While I am still rather certain that the game would not have materially changed, Rohan is correct in stating that a different sequence of actions would have resulted in a better board position. 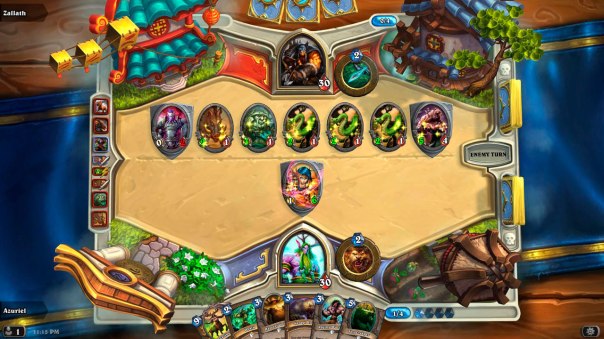 Namely, using Wrath to kill Shieldbearer, using the Novice Engineer to kill the Stonetusk Boar, and then using the Druid Hero Power to kill the Owl. The Snake Trap still would have triggered, Mishra would (presumably) still have come down, and I would be eating 11 immediate damage to the face with no board position. A single Swipe would have turned the situation around next turn, had I the opportunity to draft one, but the point remains that things could have been better handled.

I was not playing an aggressive deck. Indeed, this was the deck I drafted: 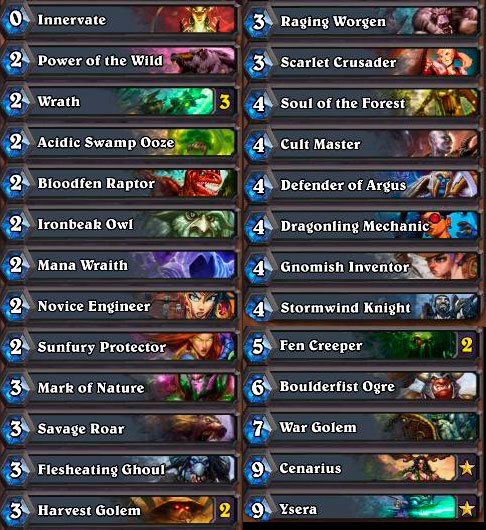 That’s right, two Legendaries, one of which was Ysera. I ended up going 3-3, losing to a Paladin and Mage the turn after I cast Ysera. So, pretty much from the start, I played the deck as Control (minus much control) seeing as how I had an extremely strong late-game presence.

The interesting thing to note though, is an article Rohan referenced in the comments: Who’s the Beatdown. This was an article written the in ancient days of 1999 concerning Hearthstone’s progenitor, Magic: the Gathering, but like most things written about Magic strategy, it is still quite relevant. Fundamentally, the article asserts that in any given match, the player that wins is the one who correctly understands the role he/she is playing: control vs beatdown. If you think you are control but are really supposed to be beatdown (or vice versa), then you will lose. This seems fairly straight-forward until you start thinking about what happens when two aggressive decks go head-to-head.

The Unleash the Hounds game was not a good example of misappropriation of roles, but look at this scenario:

Who’s the beatdown? Spoiler: not him.

I drafted a fairly aggressive Shaman deck that had some mid-range direct damage to try and seal the deal before my opponents realized that I had no Bloodlusts. Encountering a 2/1 Loot Hoarder coined onto turn 1, however, and suddenly my Beatdown deck must shift gears into Control. So instead of casting a creature that will likely die immediately, I cast a totem (it ended up being a Healing totem) and pass the turn. My opponent then… kills the totem with the Loot Hoarder. Okay then. Who’s the Beatdown? I shift mental gears again and go on to play aggressively and win.

The soon-to-be 6/3 with windfury certainly helped.

Arena is not quite like Constructed, and Hearthstone is not quite like Magic. Coining into Loot Hoarder on Turn 1 isn’t necessarily a sign of anything beyond perhaps being presented other choices that were even worse. The key point here is that you can play a Beatdown deck in a controlling manner, or a Control deck aggressively. Once you recognize those situations in which you should shift gears, your odds of winning will increase along with the odds your opponent will screw up. You might not always have a choice given what is in your hand or your deck, but that only makes it all the more important to recognize and act on it when you do.