On the Other (Cloven) Hand

First, a correction. I have been informed in the comments of my previous post that one can turn on Elective Mode in the option menu to turn Diablo 3’s talent system into what I had envisioned previously. Namely, pooling all your abilities together and picking out any combination of 6 at your discretion.

If accurate, that is the system I can (and want to) get behind.

I saw in the Witch Doctor the ability to recreate my nostalgic Necromancer of twelve years ago – spiders from jars and zombie dogs replacing skeletons and golems – but felt stymied by my apparent inability to drop skills I never intended to use with any regularity for the ones I would. It seemed as though I had to choose between maximizing my voodoo army and being able to actually destroy barrels on demand; the bottled arachnids cared not for my entropic war with all material things, and I’d be damned if I could find a way to actually use whatever random weapon I happened to be carrying around at the time.

It is thus possible that my entire original impression was colored by my ignorance of the Elective Mode feature¹. I might suggest it is partially Blizzard’s fault for hiding the light under a bushel in the first place, but nevermind.

What I wanted to mention today that I did not before, is Diablo 3’s Auction House and the effects on the game proper. Simply put, I think Blizzard is riding the very cusp between brilliance and disaster.

It took me a while to even find the Auction House interface at all, and as a result I did not use it until my second playthrough – it requires you to be logged out of any individual character, which I suppose saves Blizzard the bandwidth of people idling in-game. Between vendors who sell random magic items for ~1500g, the normal sort of loot hauls from furious clicking, and the Artisans (e.g. Blacksmith) allowing you to break down magic items to craft new ones, I cannot say that I felt especially deficient in my solo gearing. I suppose that is not especially praiseworthy, seeing as how screwing that up would defeat the entire purpose of this sub-genre, but there it is.

Once you taste the AH though, there is no going back. Unfortunately. 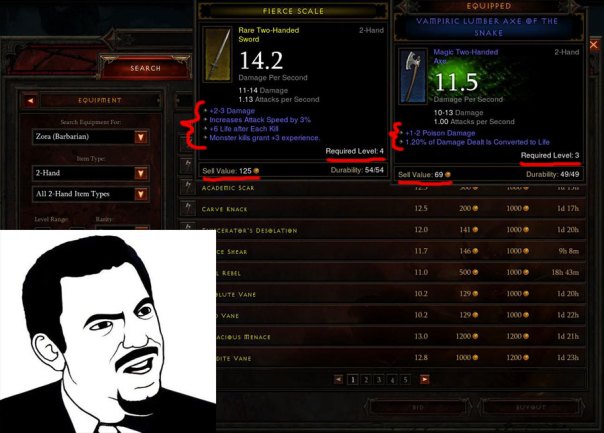 There are a couple things going on in that picture worth noting. The weapon on the right was the one that my Barbarian killed the Skeleton King with after ~2 hours of play. The one on the left is so ludicrously overpowered in contrast, it is difficult to put into words. What really stands out though is the +6 Health per kill bonus. As Sullus experienced, that singular stat bonus completely erases all semblance of difficulty from the beta by itself; surprisingly, you end up killing quite a few monsters in Diablo 3, such that a bonus like that amounts to probably six times its value in passive HP regeneration.

The problem is just beginning, though. This rare weapon, which I would have been flipping out about had it dropped for me, can be equipped at level 4. You thought mobs were already discorporating blazingly fast? You haven’t seen anything yet. But wait… there’s more! Since magic items are not Bind on Equip, this clearly ridiculous weapon is something you will be able to use on all of your starting alts moving forward. If you run out of alts, you can simply resell it on the AH or give it to a friend or whatever.

All of this is somewhat Old News, of course. But here is the thing.

I feel a stirring in my gilded loins.

I bought the rare sword on the AH for 1000g. In contrast, the vendors will typically try and hawk a +2 Mace of Sucking for nearly twice that amount. Sometimes you can luck out and get some nice items from said vendors, Sullas’s “+HP on kill” rings being a notable example, and sometimes you will find good shit right off the ground. However, even if I concede that this rare weapon was underpriced or a lucky find, my concern is that I am no longer dependent on RNG monster drops. And that puts me right back into Torchlight territory wherein I went 20+ hours without upgrading my weapon. Without the food pellet, or one worth munching on, I have little interest in continuing pressing the lever.

Don’t get me wrong, I enjoyed having the AH because I enjoy doing AH things in any game. But I can also clearly see a possible future in which the AH amounts to “cheat codes” that bypasses all the fun limitations of the game proper. And, unfortunately, I do not possess the personality that is capable of handicapping myself when a more efficient strategy is discovered. If I can get all my upgrades from the AH, I will get them all from the AH. Perhaps it won’t matter in the aggregate as long as I am experiencing some kind of gear progression (which Torchlight lacked). I dunno.

So… we will see how this shakes out on the 15th and the weeks following.

¹ Of course, the “baby WoW” criticism is still both applicable and concerning.