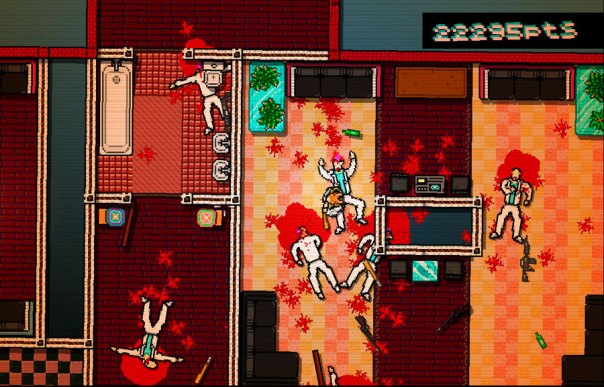 Assuming you are not already familiar with another of the darling indie success stories, Hotline: Miami is an old-school top-down twitch puzzler game featuring a truly amazing soundtrack, a disturbing narrative, and pixelated ultraviolence. The “premise,” such as it is, involves the main characters receiving a voicemail listing an address under some other pretext (cleaning, going to a business meeting, etc). Once arriving in a DeLorean, the player can choose one of the unlockable animal masks to put on (which grants various buffs), and then gets busy brutally murdering every single person inside.

What is so engaging about the gameplay is precisely how manic, and yet deliberate it all feels. A single bullet or mistimed weapon swing will kill you instantly, leading to a reset of the entire floor. But while there is “stealth” in Hotline: Miami, it is not really a stealth game either. Some of the enemies follow scripted patrols, and yet others will simply stare exactly at the only means of egress into the rooms they occupy. This is why I called the game a “twitch puzzler,” as the best way to approach most levels is to simply barrel into each room, dispatch everyone inside, and speed onward… following a route and sequence of action derived from dying 10-20 times in a row. Think Super Meat Boy, not Tenchu.

Overall, Hotline: Miami is a pretty good game as long as you are not overly squeamish over pixelated blood and gore. While it is true that there may be a more philosophical undercurrent to the narrative that questions our delight in murdering virtual people, that really isn’t why you should play the game. You should play because it’s fun… provided you have the reflexes to keep up.

W/B siphon decks were one of my favorites IRL too.

Magic: Duel of the Planeswalkers 2013 is a self-contained simulation of Magic Online, featuring the ability to play a number of semi-customizable theme decks against AI or human opponents. As you win games using the same deck, you unlock up to 30 more cards which can swapped out for other cards, or simply added to the deck; while the unlocked cards are usually just duplicates, sometimes they are brand new cards that you did not have access to before. Beyond the duels, Magic 2013 also offers 10+ “Magic: the Puzzling” matches, where you are usually tasked with winning the game in the current turn (or next one) with a predefined board situation.

As an avid Magic fan that hasn’t had the opportunity to play in years, Magic 2013 was a very compelling substitute for the time I spent playing. There is a pretty wide variety in the theme decks presented, ensuring there is a deck for your playstyle regardless of whether that is Burn deck, Goblins, Milling, White Wheenie, Blue Flyer, and/or any of the multicolored decks. On the highest difficulty, the AI was pretty merciless; across my dozens of hours of gameplay, there were only a few convoluted situations in which I felt that a real human opponent might have played better.

There are really only two downsides to Magic 2013. The first is that customization is extremely limited. As mentioned, each deck can unlock only 30 additional cards. While most decks feature unlockable cards that can subtly shift its tactics in certain directions, on the whole you are stuck with what you have. It would have been nice to be able to create your own deck out of the entire pool of cards you have access to, perhaps by adding goblins to your Burn deck, for example. The second issue might be somewhat unfair, but… well, it was hard for me to maintain my interest in the game past a certain point since I knew the environment was self-contained. There was never going to be new cards in Magic 2013 (I purchased it after the DLC expansions was released). Now, Magic 2014 is out now, of course, but that will have no interaction with 2013 at all. Magic fans or fans of TCGs in general will hopefully understand what I’m talking about.

Overall, Magic: Duel of the Planeswalkers 2013 is a pretty good Magic simulator for those looking for a pick-up-and-play TCG experience. Sometimes you will get mana screwed, sometimes the computer will top-deck some outrageous card, sometimes you will win because the computer never drew anything of consequence. That is pretty much par for the Magic course though. When it gets good, Magic 2013 feels like the real thing. Which is really all you can ask for from a game you can pick up for less than the price of three IRL booster packs.