More and more, I think Gevlon over at the Greedy Goblin has gone off the deep end. In his latest post, he asserts that a Wowprogress chart proves that Cataclysm Raids are as easy as ICC. Here is the chart:

He goes on to say:

I placed some dots on the chart. The green dots represent the current situation of Cataclysm early bosses, the red dots are Cho’gall, Al’Akir, Nefarian. What?! More people killed Nefarian than the Lich King?! Cho’Gall is easier than Sindragosa?! There are 4 bosses (Halfus, Valiona, Magmaw, Omnitron) who are easier than PP?! What the hell is happening here?

What is happening here is that Gevlon has pulled a Nietzsche, staring a bit too long into the M&S Abyss only to have it gaze back at him. As we all know, aside from Gevlon himself apparently, is that ICC was gated content. As you can see from the very chart he posted, Lich King was not even available until almost halfway through the compared time period. If we actually shift the lines back to the beginning to simulate un-gated ICC, the chart suddenly demonstrates in graphics what everyone already knew:

I did not bother listing all the same bosses as Gevlon, because in his bizzaro-world more people hitting 4/12 this tier than 9/12 last tier after the same amount of time is some kind of coup to the argument that Cataclysm started too hard. That’s dumb. What’s missing from that chart? The lines for Marrowgar, Deathwhisper, Lootship, Saurfang, Festergut, Rotface, Blood Princes, and Dreamwalker, any and all of which were easier than Magmaw or Halfus, and got peoples’ feet in the raiding door. That top green hash mark is Magmaw, by the way. If you have killed Al’Akir and/or Nef by now, you should have been able to kill 10m Lich King at 0% buff. By the April 5th line in the graph, the ICC buff was 10%.

Remember the missing guilds from Wrath I was talking about? Yeah, the graph proves they’re still gone. Speaking of missing… 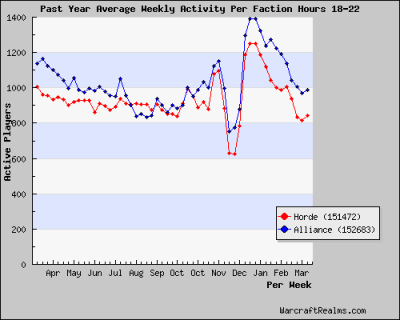 WarcraftRealms is, well, WarcraftRealms, but it is showing less player activity nowthan back in April of last year. Remember back in October? Nothing much to do, ICC super stale, etc? Same level of activity right now. I am not trying to say WoW is dying or anything, just that if Firelands comes out at the same difficulty as this tier (or higher!), well… it might be time to start spending a bit of that fortune of gold you have just wasting away in your bags.