The Problem With F2P and Microtransactions

Are you someone who almost never engages in microtransactions, has no real issue with people that do, but nevertheless feel like you are losing something whenever a game company starts to embrace them? Do you get the sensation that the purchasing power of your money is decreasing the longer a game goes on, seemingly for no real reason? Do you think cash shops are just plain wrong but have difficulty expressing it in words? The good news is I finally remembered the name of the economic concept behind the sensation: consumer surplus. The bad news is… so have game companies.

Consumer surplus is the difference between the maximum price a consumer is willing to pay and the actual price they do pay. If a consumer would be willing to pay more than the current asking price, then they are getting more benefit from the purchased product than they spent to buy it. An example of a good with generally high consumer surplus is drinking water. People would pay very high prices for drinking water, as they need it to survive. The difference in the price that they would pay, if they had to, and the amount that they pay now is their consumer surplus. Note that the utility of the first few liters of drinking water is very high (as it prevents death), so the first few liters would likely have more consumer surplus than subsequent liters.

The description is pretty self-explanatory, but I think the graph is a bit more useful. 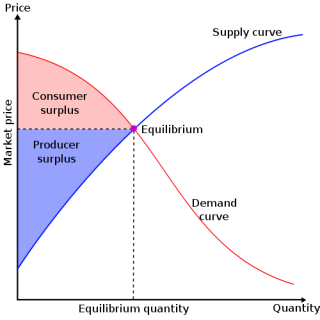 And why not, here is a Greek college professor talking about it.

Do you want some videogame examples? Think back to multiplayer Diablo 2 and Warcraft 3. When I bought Diablo 2, it was because I wanted a quality dungeon-crawler experience similar to Diablo 1 – that there was an entire multiplayer experience attached was pure consumer surplus for me. Same with thing with Warcraft 3. Would I have paid an extra $5 for access to multiplayer? Probably. That $5 that I would have paid but did not have to amounted to Blizzard “leaving money on the table.”* Non-game examples includes Netflix Streaming, where you can access hundreds of movies at any time for $7.99. In spite of the “controversy” surrounding them raising prices of dual streaming/DVD plans, I think it is rather obvious that most Netflix customers would actually pay $10, $15, or even $20 a month for the service, especially since Movies On Demand-style services can cost upwards of $4.99 per movie.

The entire premise of microtransactions is dividing your content into smaller chunks to (re)capture and monetize every ounce of consumer surplus. While it is true that overall the game and it’s various monetized components are still worth buying – it falls within the bounds of the Demand Curve, which by definition means you value the game more than the money used to purchase it – it is equally true that literal value has been extracted from you. In other words, microtransactions remove value from games by reducing your consumer surplus.

Now, there may be the open question of whether the sort of microtransactions Blizzard is doing “counts” as consumer surplus mining. If Blizzard could/did not charge $25 for a mount, for example, would they have made the mounts at all? Would Blizzard have never made the Mobile Armory and/or the premium RealID grouping features if those did not tack on an extra subscription fee? I think they might not have developed those features and mounts, but that is more of an issue with the lack of credible competition** Blizzard faces than anything else. Indeed, competition generally engenders the greatest amount “value-added” consumer surplus since direct price wars are untenable. Then again, I might also bring up the Red Queen argument in that, much like raiding content, Blizzard has to continually be moving forward to maintain its present position. The artists that made and animated the Disco Lion would have been working on something either way, so if not adding that mount in as a PvE/PvP reward of some type, the effort might have been directed into a Titan or Diablo 3 model instead (increasing consumer surplus in those games).

In any case, I find the F2P and microtransaction model somewhat disturbing, yet inevitable. It obviously has the power to save games that would not exist otherwise (e.g. LotRO, APB, etc), and thereby opens the possibility of radical innovation in the types of games we play. Similarly, the rise of Steam and iTunes (and Facebook for that matter) as content delivery services makes indie games/music possible that could not exist in a typical retail box store. That said, the existence of that hitherto unexploited consumer surplus also leads to worse games, like Tiny Tower***. Meanwhile, instead of growing the industry, we have the major players pumping out sequals and squeezing the blood from what rocks are left instead of, well, mining for new rocks. This same phenominom is going on in the movie industry, with parallels like making movies 3D not because that adds value, but because A) they get to charge more, and B) it makes the movies nearly impossible to pirate.

The way I see it, the more game companies fall over themselves trying to monetize every corner of our consumer surplus, the less they fall over themselves giving us quality entertainment. Eventually, there will be some break-point beyond which lies an Era of Subsistence Gaming where we get exactly what we pay for and not one whit more. And those will be very bleak times indeed.

*Except Blizzard did not actually “leave any money on the table,” since that implies there was no value to Blizzard for giving consumer surplus. As we all know, it is the exact opposite: we as players give that value back to Blizzard in the form of brand loyalty and positive word-of-mouth recommendations. Part of that comes from the (historic) quality and polish of their games, but the feeling that we are getting more plays a non-zero part in the calculus.

**Blah, blah, Rift, LotRO, etc. Rift peaked at 600k subs and is now hovering around ~480k. LotRO peaked at 560k and is now at 360k. If you add both Rift and LotRO numbers at their peak, and then multiplied that by two, WoW would still have had more players than that in just North America… in 2008. Lost subs are lost subs, but I bet the Disco Lion made more money in the opening day it was released to cover a year’s worth of lost subs.

***Worse as in psychologically designed to exploit your nucleus accumbens, and essentially disprove the economic theory of rational consumers single-handedly.

Posted on July 26, 2011, in Philosophy and tagged Consumer Surplus, Diablo 3, F2P, Microtransactions, WoW. Bookmark the permalink. Comments Off on The Problem With F2P and Microtransactions.