← Out of Game
Quick & Dirty Guide to ME3 Multiplayer →

SWTOR Drops an EVE in Size

In other words, SWTOR lost 400,000 subscriptions in the last three months:

That’s a loss of nearly 25% for the massively multiplayer online role-playing game, or 400,000 subscribers. […]

Update: In a conference call this afternoon, EA said the decrease was indeed due to “casual and trial players” cycling out of the game.

It is worth noting, of course, that the 1.3 million current subscribers is circa March 31st; things may have stabilized or gotten worse sense then.

Remember the whole brouhaha concerning the free month of game time given to Bioware’s “most valued players?” That took place two weeks into April. So while that may still have been a cynical move to prop up subscription numbers, we can be reasonably certain that the 1.3 million figure is not being finessed by anything (the 1.7 million figure at the beginning of the year had some vague language).

I’m not sure I’m going to follow SWTOR with the same level of attention I give to WoW’s subscription/raiding numbers, but for some future reference, here is an Xfire screenshot: 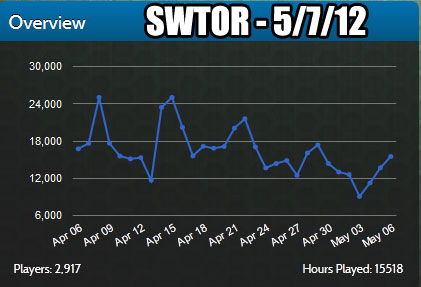 I… guess that’s a downward trend?

I personally don’t like using Xfire as a metric – the sample of players here are playing SWTOR for 5.3 hours at a time if I’m reading that right, and I’d assume even happily subbed players play less over time – but there you go. Damning evidence of EAware’s hubris and impending downfall, or signs of a much healthier MMO than most releases have achieved in the last few years. Obviously 400k is nothing to sneeze at, but 1.3 million is much better than analyst predictions of 800k.

Spin that narrative however you please.