For those not keeping track at home, Firefall is… well, hell if I actually know. Without looking it up, I’m assuming it’s a F2P MMO set in an open-world, over-the-shoulder Borderlands 2 with bugs taking the place of bandits. After looking it up, it seems the devs want to emphasize the fact that it is a skill-based action shooter with sandbox MMO elements. Apparently the world is a not level-restricted, but the highest-ranked “dungeons” will need full groups with crafted gear. Which sounds like roundabout levels to me, but let’s play along.

One of my biggest fears with new MMOs – or any game which expects me to be playing for 50+ hours – is losing on the character select screen. How am I supposed to know which class will be the most fun months from now? And even if I luck into the best class for me, how will I know it won’t radically change (or get nerfed) years later? So, right away, Firefall got some major brownie points with me once I understood that a “class” means a Battleframe, which you can swap out at pretty much any time. Need a healer? Jump into your healer suit and go play. 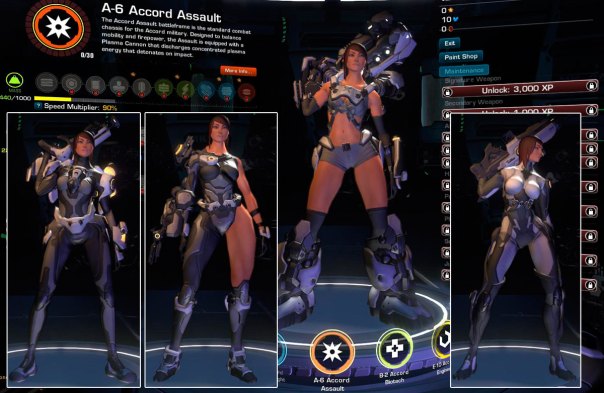 In a twist, the Assault and Engineer classes have less armor than the healer and rogue.

Loincloth starting armor tropes aside, I think the whole Battleframe direction is pretty clever. Not only are you allowing people to play whatever role is necessary at the time, having independent frames means a player has to “level-up” multiple times while still allowing for quick catch-up. In other words, it’s horizontal progression. PlanetSide 2 has this same sort of thing, where you might have to purchase various levels of Flak Armor for each class (which is expensive with Certs), or you can just focus on playing Light Assault or Medic and save your currency.

In any case, from the extremely limited amount of time I spent playing, things seem fun enough. They certainly looked good, at any rate.

Borderlands 2 with an actual color palate.

Some people might not like the sort of cel-shaded motif here, but this sort of thing has never bothered me. If the game runs better and has more options for crazy effects, then I will “sacrifice” ultra-realistic graphics any day. Plus: everyone has jetpacks, right from the start.

I can’t give much more of an impression beyond the above, as I was unable to progress past the second “quest.” The first quest was to follow a waypoint, and the second was to kill some bugs and then return to purchase your sidearm from a vendor. Unfortunately, either I am completely oblivious (possible) or the the game was bugging out for me (likely) seeing as how no menu would appear after interacting with said vendor: 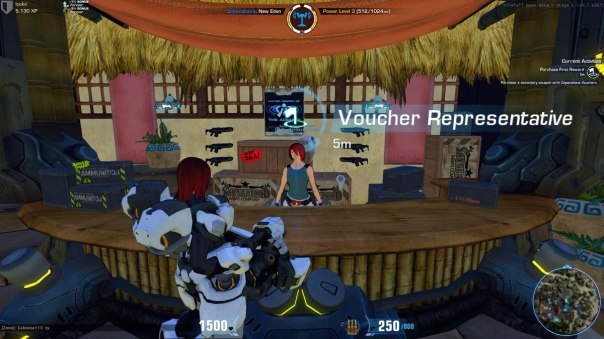 How about you give me a gun and I don’t shoot your face off?

Since the mouse controls your aim, I know that I successfully clicked ‘E’ on the vendor because the crosshair disappeared and an actual mouse pointer appeared. But no menu. I tried highlighting the guns in the background, clicking on every on-screen icon-looking thing, reloading the client, and finally restarting my computer. Open beta is open beta, but I was left feeling pretty disappointed all the same. Hell, I couldn’t even submit a ticket because that interface wasn’t showing up either. I could probably submit a bug report on the forums… or I could go play some other game that works instead.

While I was clicking around, I did notice something particularly interesting: 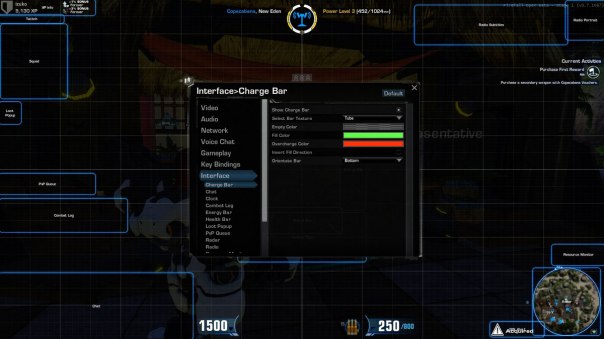 Customizable interface right out of the box?!

That’s right, you can move shit around your screen and I think resize elements right from the start. It might seem like a small thing, and it arguably is small, but it begs the question of why some MMOs *cough* require you to download 432 mods to do the same sort of things. Artistic restrictions? General laziness? More of this sort of thing, please.

I might check back in on Firefall later to see if the problem resolves itself, or I might simply wait until release. Until then, feel free to try it out yourself.