I am not entirely sure how I feel about the news that Bioshock Infinite will be getting three DLC packs in the near future. Actually, I do: a distinct lack of fucks given. 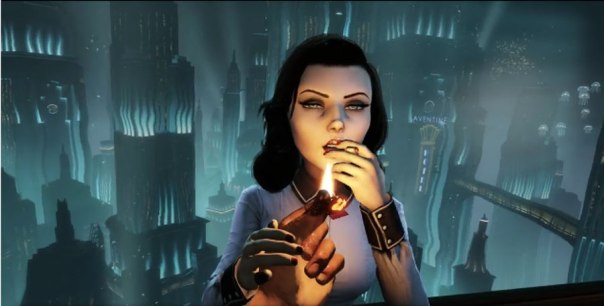 Can this be considered fan service?

The first DLC is a story-less horde mode that will subject you to more of the banal combat system. The second and third are portions of a presumably expanded narrative, although who can really tell what is going on in a time-traveling alternate-dimension throw-everything-at-the-wall plot? But, hey! We’re going to see a pre-destruction Rapture! You know, a throwback to the games that were actually good.

To be fair, Bioshock Infinite did do some things right. The visuals were gorgeous, Elizabeth made the game feel more human, Columbia had brilliant imagery, the music was fantastic, and so on. It is just that Kotaku’s recent interview with Ken Levine boiled my residual bile concerning the plot back up into white-hot incandescent rage. I was fine all the way up until the final paragraph:

“I walked away from BioShock Infinite actually very, very satisfied mostly because of the debate that people were having, not just about what happens in the game, but about what the meaning of it was. That we gave something for people to argue about. We trusted the gamers enough to say, ‘You know what? There’s some room here for you.’ If people walk away frustrated that we didn’t explain everything to them, it probably wasn’t a game for them.”

That noise you just heard is the sound of an aneurysm.

No, Levine, you do not get to fucking say that. As I pointed out months ago, the plot of Infinite is complete garbage. The “room” left for gamers is for them to refuse to apply critical reasoning to their experience, thereby passively constructing a better ending which doesn’t exist inside the actual game.

I can get behind a narrative that explores the descent of a man’s soul to the point that he believes unmaking his existence would be better for everyone involved. We can all probably emphasize with that, regretting having done things or failing to do so. That was not Bioshock Infinite’s plot. The real plot was this:

Finally, let me kind of wrap all these various ingredients up into one complete shit sandwich. What exactly is the message being conveyed here in Bioshock Infinite? What is the theme, the moral of the story?

At the beginning, I almost felt like Booker was trying to make up for his sins, to seek forgiveness and redemption, to put things right. But what is Booker’s actual crime that he is repenting? To stop a person he never turned out to be from entrapping the person he is into a crime a third version must now stop? Booker choosing to be drowned seems a noble sacrifice until you realize what exactly he is undoing: choices he never made. Or, even worse, stopping a man (Comstock) he had no choice into becoming. There is never any “good Comstock” because apparently being bad is a constant. Fate. Predestination.

What is the message here about personal responsibility, free will, and choice? You have none because Constants and Variables. And suddenly, infinite universes means you are implicitly responsible to consequences [of actions] that you never chose and never happened in your own universe. Do you remember when you donated to charity instead of setting a baby on fire? Well, you should feel real bad anyway because the not-you baby-arsonist is running amok and it’s up to you to stop yourself like you already did by not setting the baby on fire in the first place. GUYZ, DEEPEST PLOT EVAR.

There is no route from Infinite’s plot to a good story. None. The “grand redemption” is paying for mistakes you explicitly did not commit in this universe. Even in my most charitable reading of the game – that Booker acknowledges the potential darkness in his soul – leads to the same asinine moral conclusions. Because Booker can choose evil, and did so in an alternate universe, it’s better to kill all possible versions of himself before he can make that potential choice. O… kay? All of us have darkness inside; quite literally who we are is determined by how we manage that darkness. Simply choosing to have it never happen in the first place is an easy, childish fantasy.

And don’t get me started on how moral responsibility can possibly exist in a deterministic universe. 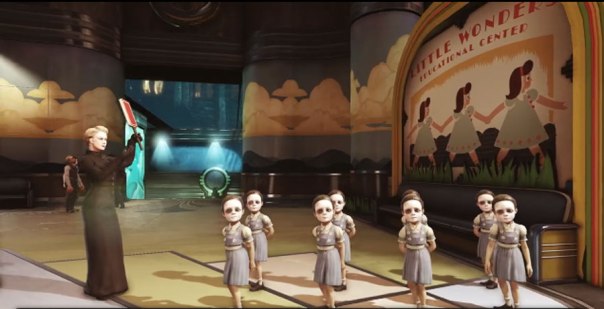 Remember to feel guilty for killing them in an alternate universe you weren’t a part of.

But you know what? This is not even about Infinite anymore. This is about the hubris of an artist to paint his/her deficiencies as strengths, thereby negating any difference between good or bad works. It is me telling you that if you do not find this argument convincing, it is your fault. “If you don’t like this thing I made, it must not have been for you, and thus you’re an idiot for having bought it.” That’s not how this shit works! And besides, Levine, you already told us everything relevant in the game proper: namely, that you’re the next M. Night Shamalanananon. A couple of great works, followed by a more crappy one, and all of a sudden (spoiler alert) the trees are killing everyone.

The tragedy in all this is that we already know who ultimately wins the historical narrative. It has been four months since the debacle started, and all the comment sections in the DLC posts are filled with those gushing over the “deep” ending. And why not? Those who were disgusted as I am have long since stopped caring, or are embarrassed to silence that they still do, leaving the uncouth Philistines to drown in their Confirmation Bias echo chambers. And that is how this whole thing will play out: a great game with a good plot that sold millions of copies. Just like 50 Shades of Grey, Diablo 3, and EA’s Sim City.