The normal sort of thing to do is look back on what 2013 brought us, but ain’t nobody got time for that. And 2013 sucked anyway. Let’s see what’s in store for next year, yeah?

For as much as crusty old bloggers harp about Star Wars Galaxies and Ultima Online, I find it amusing how not a one of them (that I am aware of) has mentioned The Repopulation. What is it? Why, according to Kotaku it is the love child of SWG and UO. MMO? Check. Open-world sandbox? Check. Build your own towns? Check. No levels or classes? Check and check. Can just be a crafter all day, or dancer, or street performer? Ayep. Hell, they even claim you can seamlessly switch from hotkey MMO style combat to an action-oriented 1st/3rd-person shooter perspective. It’s a veritable pantheon of Jesus features.

You can craft a Portal turret pet. Need I say more?

Apparently the game is already in Alpha from a successful Kickstarter campaign in 2012, although they are giving it another $50k Kickstart for some reason or another. Closed Beta for backers starts in March. The end result will be a F2P MMO that sells “memberships” in tiers for a one-time purchase, which is perhaps the most novel business model I’ve seen yet. In fact, I think that was the last undiscovered videogame payment scheme. Achievement unlocked.

If Landmark ends up being anything more than a commercial disaster, it will be in spite of having the most vague, nonsensical marketing strategy I have ever witnessed. I mean, watch this promotional video. That was uploaded on December 6th, 2013, so it’s not from back when they didn’t know how they were going to cover up the EQN delay.

Okay, this does look kinda interesting.

That being said, I am always keenly interested in anything that allows players to freeform create things in game spaces. I’m not talking about building a house somewhere in UO or other nonsense. I’m talking about actually being able to craft something that can effectively be used as a portfolio of game design. Hell, I still have all 11.6 gigs of Portal 2 installed because I imagined that one day I would get around to building my own puzzle as an example of level design. Did it happen? Nope. Could it have happened? Yep. PlanetSide 2’s Player Studio deal apparently had some budding designers banking $5000-$8000 in a quarter, for crafting the equivalent of hats and camo. Landmark will have the same sort of system in place, on a much larger scale.

So, Landmark is on the radar. I’m not convinced that it will actually be a “real” MMO in terms of it being entertaining to play the non-crafting bits, but who knows? Certainly not SOE, that’s for goddamn sure.

Not a thing. Seriously, it’s Borderlands 2 Online minus a PC version. Which means I’m not playing it.

I hadn’t even thought about this game since I ran into a bugged quest back in July. Actually, I take that back. I had an entire post ready to go entitled “Firefail” and it was to be accompanied by this picture: 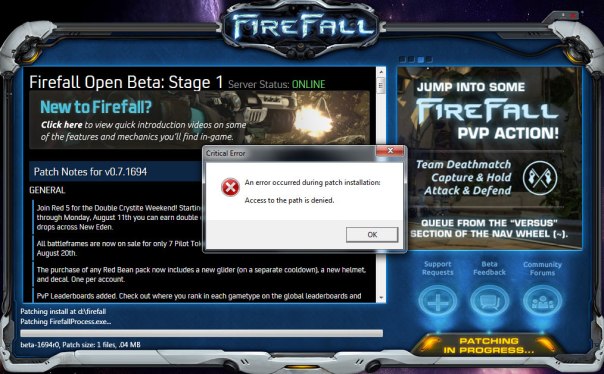 Welp, so much for that.

Basically, I tried patching the game and got stuck at the last 0.04 MB. I truly did try everything, including a full uninstall of the game client and a redownload.

As it turns out, I might have dodged a bullet there. Apparently, the CEO of the game studio was fired after having spent millions of dollars on high-end camera equipment and, no joke, converting a tour bus into a mock-up of in-game transport. That bus job cost $3 million from an MMO game studio’s coffers. Oh, and I guess apparently the CEO announced that he unilaterally cancelled all PvP in a forum post? You can read a sort of insider view of the dirty laundry in this (verified!) Reddit thread.

Posted on December 31, 2013, in MMO and tagged EverQuest Next, Firefall, Landmark, The Repopulation. Bookmark the permalink. 5 Comments.