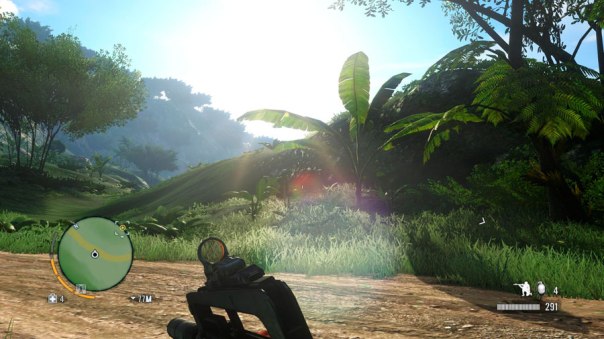 Far Cry 3 is the latest entry in the mostly unrelated, Heart of Darkness-esque Far Cry series. The game follows Jason, a trust fund frat boy who is violently thrust into a hideous underworld of slavery, rape, and torture on an otherwise pristine island paradise when his friends are captured mid-vacation by pirates. Much like the other two games, FC3 features a long string of story missions set amidst a wide-open island sandbox.

Far Cry 3 has a lot going for it. The game is unbelievably slick, from top to bottom, in almost every respect. For example, it is easily the best-looking Far Cry, with graphics and sweeping vistas that rival the likes of Skyrim. But the slickness permeates deeper still, down to character animations too. Stealth kills start off brutal and in-your-face, only to escalate further once you unlock the ability chain them together, use the target’s own knife to score a long-distance secondary kill, and so on. This sort of Ninja Gaiden feel is on top of the many layers of weaponry that impart similar visceral thrills, be they sneaky bow sniping or front-door grenade launcher-ing.

Another thing that was extremely well-done are the missions, dialog, and general plot. Missions flow well, the various tasks you are given feel substantial and necessary, the characters are absolutely unique, and there is a general sense of gravitas to your actions. In comparison, the mission structure in Far Cry 2 made less sense, or at least, it felt less impactful.

But therein lies the rub.

Grenade Launcher is a tad OP. One shot, 3 vehicle explosions.

As I have mentioned over the years, I view Far Cry 2 as one of the more sublime gaming experiences I’ve ever had. That game knowingly used its own flaws as a vehicle for storytelling, such that by the end of the game, you felt exactly how the in-game characters felt: weary, despondent, and resigned. Far Cry 3 attempts to recall the same lightning, but it can’t quite pull it off, for several reasons.

One of those reasons is that Far Cry 3 feels a lot more “gamey” than its predecessors. Part of the progression system involves hunting and skinning various animals to unlock additional weapon slots, a larger wallet, and so on. By itself, the mechanic is perfectly valid. However, it feels more artificial, especially given the fact that you are straight-up using cash in the stores to buy things. Why do I need to skin goats to expand my $1000 wallet? Couldn’t I just, you know, pay the $50 for a new wallet? Does this store really sell sniper rifles but no wallets?

That might sound like a little thing, but it’s precisely the little things that can break immersion. Far Cry 3 features a normal sort of game map, for example, but it’s a, ahem, far cry from the in-game map you had to actually glance downwards to see in FC2. More jarring to me though, was the crafting interface that necessitated crafting via the menu screen. Popping syringes felt pretty smooth, but effectively pausing the game with bullets in mid-air to pump out another half-dozen healing ampules just sorta felt wrong. And I haven’t even mentioned the interface riddled with perfectly usable but undeniably busy UI elements, mini-maps, quest trackers, and so on. Far Cry 2 didn’t even have crosshairs on by default, for god’s sake.

It is worth mentioning, in a general sense, that Far Cry 3 also continues the series penchant for wildly oscillating difficulty curves. If your natural inclination is to try and be as stealthy as possible when assassinating targets, you will experience some nice challenges. If you instead realize that a single flame arrow can burn down the hut your target is inside, or your bafflement towards unlocking infinite grenade launchers so early in the game leads to always equipping it, well… the game is remarkably easy. There are still a few missions where you can lose by raising the alarm or by letting an NPC die, but damn do you feel silly sneaking around after bombarding outposts with grenade fire and/or regular fire. Same outcome, minimum effort.

Overall though, I still feel like Far Cry 3 deserves top marks. Recommending that someone play FC2 carries a bit of baggage, as it doesn’t really become “worth it” unless they stick through it the entire way. In contrast, someone could play Far Cry 3 at pretty much any given moment in the game and feel like they experienced the best bits. I have seen some reviews that lament FC3’s later half for being less noteworthy, but while the main antagonists are less interesting at that point, it is somewhat offset by gaining a wingsuit and ample means to use it everywhere. Far Cry 3 is not particularly long, but I believe it’ll be worth the lower purchase price for most anyone… or at least FPS fans.