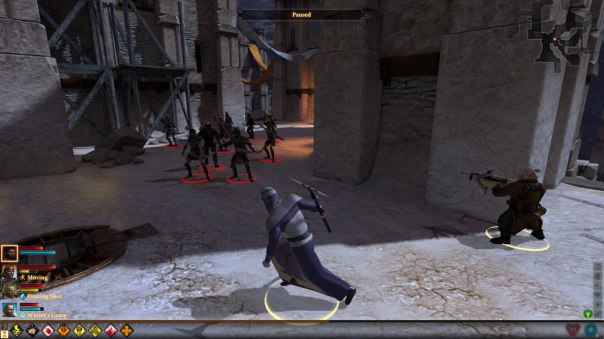 Another day, another 30-dude ambush.

In light of the impending release of Dragon Age 3, I decided to go ahead and play through the much-maligned Dragon Age 2. Would it be really as bad as everyone says? Well… maybe.

When Dragon Age: Origins came out, it was a love-letter to the Baldur’s Gate generation, featuring tactical and brutal combat, an epic and lore-rich storyline, and plenty of morally questionable scenarios. Dragon Age 2 follows mostly along similar lines, but there are enough breaks from the formula that you start wondering if the devs wanted to make a different game altogether.

Combat in Dragon Age 2 has a much more action game feel, even though it shares many things with the original. The Tactics system is still in place for configuring the AI, for example, and you can still pause the action at any time to issue orders or directly control different party members. Indeed, in the beginning, it felt largely the same as Origins, albeit “quicker.”

The major problem though is that the game throws waves and waves of weak enemies at you, even when it doesn’t make any sense. You could be walking around the slums when BAM! Thirty dudes try to take you out, ten at a time. While superficially more exciting, the challenge in these sort of fights is extremely low; the only times in which my party died were when an enemy spellcaster dropped an AoE spell, which typically will one-shot everyone nearby before you realize what’s going on. 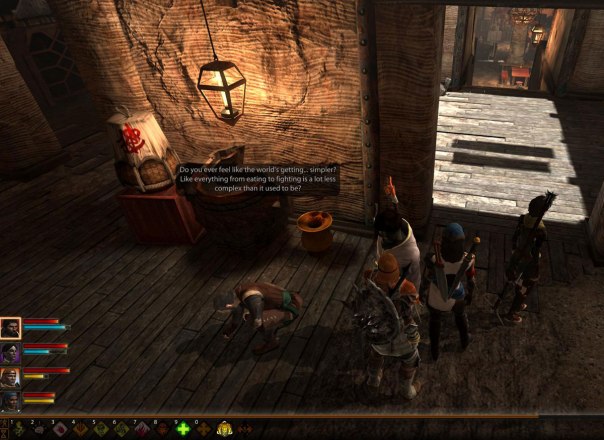 Bioware went a different direction with the plot and overall story structure as well. Instead of fighting another Blight or dealing much with Darkspawn at all, the story follows your character as he/she… well, lives in a city. On one level, it felt pretty novel to experience a former refugee’s rise to prominence, especially given how reasonable the path ends up feeling. I especially liked how each game Act fasts forward time by 3 years – all too often it feels like the average RPG sort of assumes all this character development and world-saving occurs within a week.

On the other hand, the lack of any discernible threat puts a lot of pressure on the incidental stories being interesting… which they are largely not. The underlying plot of Dragon Age 2 is an exploration of the Circle and Templar tension within the Dragon Age setting. While I always thought that bit lore was cool, it isn’t enough to carry a 40+ hour campaign. At one point, the only quest left I could complete was the plot quest to find some Blood Mages who ran away, and all I could ask is: who cares? Those Blood Mages have nothing to do with anything, even in context. 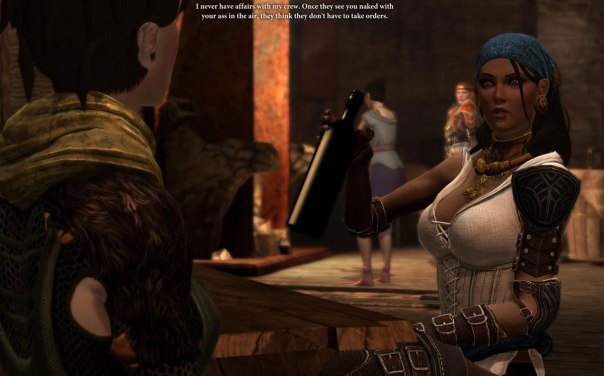 At least the dialog was refreshing.

Another major issue I had with the game was the rather outrageously blatant copy & paste job with the environments. Going into a cave? Guess what, it’ll be the same cave you always go into, except maybe certain passages will be blocked off this time. Given how the game takes place in one main location, I can understand reusing assets to an extent. But when every warehouse, every cave, every secret base all have the exact same map even when they have no rational reason to be shaped similarly? Call it what it is: developer laziness and cutting corners.

Overall, the online criticisms of Dragon Age 2 largely hit the mark. It is very clear that DA2 was an experiment, and it is equally clear that even Bioware acknowledged that things did not pan out quite as they had hoped. Although some characters from Dragon Age: Origins make cameo appearances, there isn’t a real reason to encourage that fans of the original game to play this one. It isn’t awful, in isolation, but it’s not compelling enough to deserve the Dragon Age title.