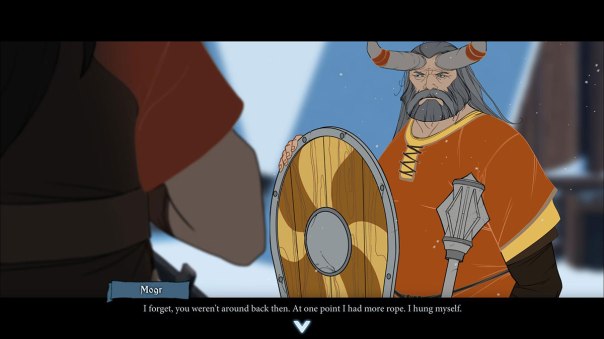 Oh, you. Wait, was he serious?

The Banner Saga is one of those darling Kickstarter stories in which a scrappy development team (or professional game designers) achieves high accolades for a beautifully drawn, epic soundtrack-having mobile-to-PC tactical RPG port. When judged against its Kickstarted peers, it stands rather tall amongst them, especially for having actually made it to release. When judged on its own merits however, The Banner Saga falls somewhat short despite it’s high Metacritic rating.

The basic thrust of The Banner Saga is one of Norse-style apocalypse. The gods are dead, the historical baddies (Dredge) are flooding the North, and everything is going to hell. The plot follows two separate caravans as they rapidly become refugee trains fleeing the destruction. Along the way you are presented with a series of Choose-Your-Own-Adventure blind choices and are rewarded or punished (mainly punished) with abrupt character deaths, loss of supplies, and similarly depressing news. Oh, and occasionally battles.

The tactical combat system in The Banner Saga is not one I have seen before, and I’m tempted to say that was for a reason. Every unit has both an Armor meter and a Strength meter, the latter of which is also your HP. Damage is calculated as “Your Strength – Their Armor = They Lose X Strength.” I already consider such systems a Red Flag simply for how many times it leads to snowball situations: wounded characters immediately lose most of their combat value. “Luckily” enough, damaging Armor isn’t tied to Strength at all (Armor Break is a separate stat you can increase), so even a character with 1 HP (i.e. 1 Strength) can do something useful. Also, some character classes have special abilities that do a set amount of damage no matter that’s character’s Strength. 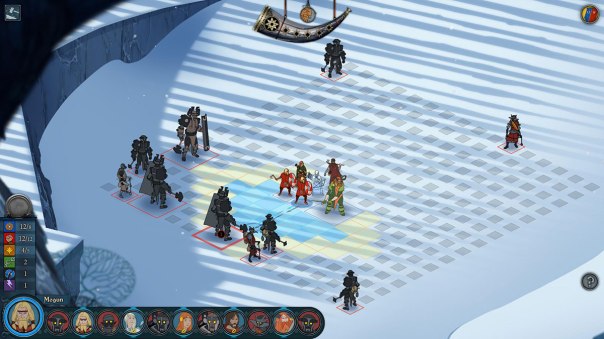 Another day, another grid with the same enemies.

My issue with things comes from the Turn Order system. Simply put: it alternates. Before you get into combat, you can decide which of your party members goes in which order. Once combat begins, it starts with your 1st member and then goes to one unit on the enemy’s side. If you manage to kill an enemy before their turn, the next enemy in the turn order will take their spot and everyone else moves down. This continues until there is only one enemy left, which starts “Pillage Mode” and your whole team gets one turn for every one that the last enemy receives.

The entire system leads to bizarre scenarios wherein an enemy unit can suddenly get 3-4 free turns of attacks off on a character before you can react, as you uselessly move around other out-of-range characters. In other words, the enemy gets more dangerous the more enemy units you kill; conversely, this never seems to improve your own odds of success when put in similar situations.

The other major problem I had with the game design was… well, the rest of it. You receive Renown points after battles, and Renown pulls double duty as both currency to purchase items/Supplies for your caravan and as an upgrade currency. If you want to level a character up from 2 to 3, that costs 10 Renown, for example. The problem here is that there is never enough. Which, okay, it’s Ragnarok, what are you going to do? But The Banner Saga is not at all gun-shy about killing your playable characters without warning in one of the frequent dialog choices, taking the 30+ Renown you’ve invested along with them. I couldn’t help but feel like the developers were trying to make the game be a roguelike but only going halfway. Am I supposed to reload my last auto-save when I find out that X died? Or will there be enough Renown later to off-set the loss?

Know what’s fun about these sort of choices? Nothing.

There is some good things going on in The Banner Saga – the music, artwork, and animations are fantastic – but it’s not a complete project. The less you treat it as a serious game and more as an interactive picturebook, the better off you will be.

Posted on May 19, 2015, in Review and tagged Kickstarter, Ragnarok, Roguelike, RPG, Tactics, The Banner Saga. Bookmark the permalink. 3 Comments.