I feel kinda bad for having sung the praises for Hearthstone’s Tavern Brawl mode right as they released perhaps the worst iteration of it possible. This past week’s Brawl is “Encounter at the Crossroads,” and follows the (intentional?) pattern of every other week’s Brawl giving you a deck to play with. Instead of being filled with Webspinners, your deck is filled with completely random garbage cards, and up to three Legendaries. It ends up being 15 Neutral cards and 15 Class cards, for the record, and they are completely random – Mad Scientists in decks without Secrets, cards that trigger off of dragons without a single dragon in the deck, and so on.

My utter disgust with this week’s Brawl got me thinking: what’s the big deal? There is RNG everywhere, so why hate this kind? What’s so worse about this RNG as compared to the Webspinner Brawl or the spell one the week before?

I think my biggest problem is that this was Blind, Lingering RNG. Last week, you didn’t know what kind of creature you would summon… other than that it’d be an X mana cost one, it would come before the spell resolved, and you knew what was in the rest of your deck. You knew how much removal you were packing, you knew what synergies existed, you kinda knew what to expect from your opponent.

With a Crossroads deck, you know nothing . You didn’t even know whether to mulligan your shitty opening hand; if you threw anything back, chances are you’d get something even worse. 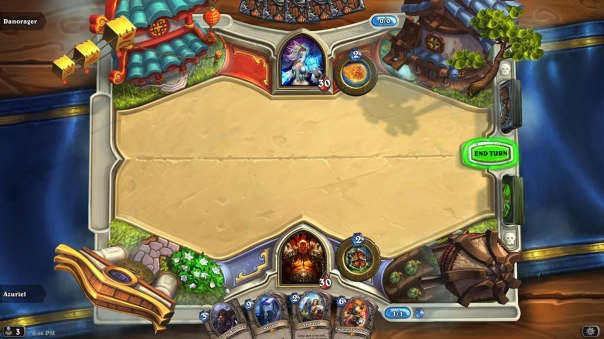 Spoiler alert: I lost this game.

One of the benefits to RNG is the very thing that people often complain about: RNG can determine games. Yes, there will be games that you lose to coin flips. Yes, it feels awful when you’re winning to suddenly fall behind through no fault of your own.

At the same time… randomness can make things interesting. Randomness can challenge you, present you with scenarios you’ve never encountered before, and allow you to overcome defeat through judicious use of probability. Do you play around that 10% chance that the Piloted Shredder pops out something that destroys your strategy, or do you play it safe? That sort of thing is (or can be) an interesting decision, and different people have different thresholds of comfort when it comes to percentages.

I mean, imagine the opposite case with no RNG. Losing from your opening hand. Or at least your only hope being that your opponent has as bad a hand as you do. It feels bad, man.

This is what this Brawl has felt like all weekend long – inevitable lingering losses. I played in the neighborhood of twenty games to complete my dailies, and I was never blessed with those same insane, on-curve openings that I would routinely experience the sharp end of. In most of the games, I would have been better off conceding in the first two turns. Could you imagine someone feeling the same in the Spell-Minion or Webspinner Brawl? Don’t get me wrong, you could get way screwed out of nowhere in those Brawls. But that’s the thing: it’s immediate. It’s more fun, even on the receiving end. At least in comparison to being behind, with nothing good to play this turn, and knowing you have a 99% chance of drawing into even more garbage the next turn.

There’s RNG and then there’s RNG. This is the latter, it sucks, and I hope Blizzard never does it again.