← Impression: Craft the World
WoW Down to 5.6 Million Subs →

In the time since I wrote yesterday’s post (over the weekend) and today, I’ve “beat” the first campaign level and spent a total of ~18 hours in Craft the World. For the curious, you completing a campaign world involves finding the portal room, and then defeating the guardians in that and in five other rooms before reconstructing the the portal and getting out.

Across the hours, I believe I have figured out why I don’t like the game: the tech tree. Not the idea of a tech tree – which exists as a tutorial mechanism – but simply how poorly it is paced. For example, here is the beginning part: 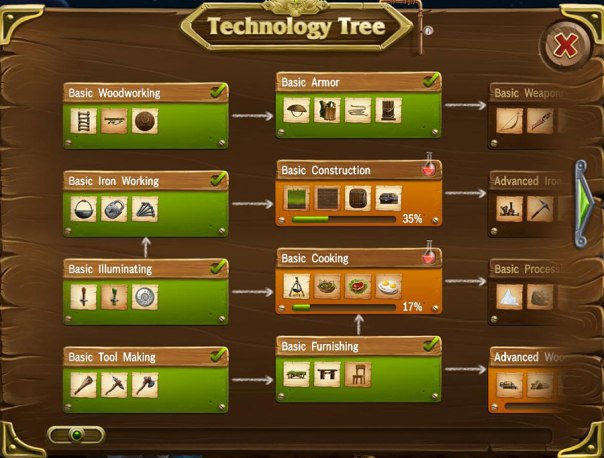 Early on, you get the ability to craft wooden armor. Great! For that, you need rope. Which requires wool. Which requires sheep. Which might not be anywhere near your spawning location. In my first world, the sheep were all located beyond a goblin camp, which are a group of extremely tough mobs that you can’t hope to defeat without, you know, some armor. It was only later that I realized that the Portal spell you get at the beginning of the game could be used at any distance, but still.

Another example: wooden doors. One of the first “quests” you receive is to construct a shelter for your dwarves. Like most games, a shelter is only a shelter when the walls (including the background ones) are filled in, with the exception of any doors. You can make a wooden hatch pretty early on, which implies the ole Minecraft shelter approach of just digging a hole. However, your Stash is immovably placed on the surface. Thus, right from the start, you experience the uncomfortable dissonance of either A) building a shelter underground, leaving your Stash exposed, or B) crafting an incomplete shelter around your Stash and waiting possibly hours before unlocking “wooden door” technology.

What is almost worse than this clunkiness is how intentionally bad or misleading the entire scenario appears to be. Creating a Shelter requires you to place a Totem, whose description specifically says:

Creates an aura around the house that protects from monsters.

First, I have never seen it actually “scare off” the ghosts that come each night, so either that functionality doesn’t exist, or it requires the Totem to be closer to the Stockpile and not just within the Shelter, which is unintuitive. Second, for the Totem to even be closer to the Stockpile, you either need Wooden Doors or to construct a goofy system of vertical Wooden Hatches, severely slowing down your dwarves’ harvesting of trees/ground-level resources. Or maybe going even further into the Minecraft approach of boxing yourself in at night, then breaking the walls down in the morning?

Regardless, the Tech Tree is poorly designed and badly paced. I still remember getting about halfway through – which requires a ton of useless crafting – and then… suddenly, inexplicably having fun. Like a lot of fun. I was crafting Mine Carts and Elevators and using Scaffolding to reconstruct the terrible Shelter I had been enduring previously. Instead of creating useless items over and over, I was progressing naturally through the Tech Tree. Things faltered a bit more later, but by that point I still had more than enough things to do to keep me busy as I gathered more resources.

Technically speaking, the Tech Tree is only relevant in Campaign mode; if you enter the Sandbox mode, you can ignore the Tech Tree entirely. But it is one of those things that hold back the entire game with its terribleness. After beating the first Campaign world, I unlocked the next, which is an Ice World. I’ve played about 1-2 hours into that world, but everything that was bad originally is still bad now. Do I seriously want to spend another 5+ hours until I get Scaffolding? Or, you know, make heroic efforts tracking down Sheep in order to get Rope? Nope.

The bottom line here is that Craft the World is servicable if you especially like this genre of games, but only if you have already played the much better titles to death.

← Impression: Craft the World
WoW Down to 5.6 Million Subs →