Dirty Bomb is an Overwatch-esque* TF2 clone in perpetual Open “we’ll take your money though” Beta. It features fast gunplay, pseudo-Titanfall maneuvering, overpowered abilities, and a large roster of $9.99 characters.

Yep, shotgun to chest would explain that death.

I only became interested in Dirty Bomb after the recent Humble Bundle was offering multiple character unlocks and 50,000 points (enough to unlock another character) in the $1 tier. Now that I have around 10 hours invested, I can perhaps see this game as being a stopgap FPS solution to my Overwatch itch.

There are some interesting things going on in Dirty Bomb. Before heading into a match, you have to lock-in three Mercs – while you will be free to swap between them mid-match, you cannot select any others. Running speed is affected by your currently equipped weapon ala Counter-Strike, so running around with knives out is the best way to get around. There is a limited amount of wall-jumping and various “long-jump” shenanigans.

One of the mechanics I enjoy a lot is the downed state. Basically, when you “die” you really fall to the ground and writhe around until the wave-based respawn timer triggers. While on the ground you can be revived by any character if they spend 5ish seconds holding F down, or instantly by any of the Medic class abilities. The other team can prevent a rez by finishing you off, either by pumping more bullets into your prone form, or landing a melee hit. I enjoy the tension in the choice to finish someone off, as bullets are in short supply (you basically have 2-3 clips unless you have an Ammo guy on your team) and splitting your attention in the middle of a firefight can be deadly. Do you finish that guy off, or try to take out more people and risk a Medic zipping in and instantly reviving him? 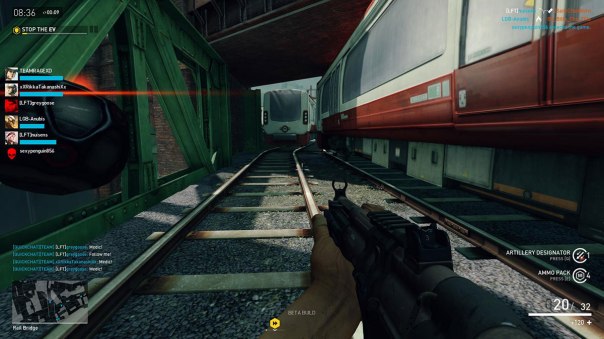 Pardon the stickie bomb stuck to my face on the left, there.

There are some shortcomings in Dirty Bomb. First, the game looks like it came out in 2010. While that does ensure that it’s playable on a number of PCs, the lack of production values of almost any kind makes me leery of “investing” in expanding the roster. Not necessarily in the money-sense – if you only play with Missions up (which reset every 3 hours), you can unlock a new Merc every ~10 hours of gameplay – but in the time-sense.

Second, the game feels unbalanced all to hell. Nowhere is this more evident than in the “Execution” mode, which is essentially Dirty Bomb pretending to be Counter-Strike… with a grand total of two maps. With respawns disabled, it becomes very evident that the characters with airstrike and orbital laser bombardment abilities are far and away better than more generic characters, in the sense that they can one-shot most everyone.

Overall though, Dirty Bomb is fine for what it is: a F2P FPS distraction. If you are like me and have zero interest in trying to get into TF2 after nearly a decade of updates and uber-veterans, you could probably do worse. Maybe. Whatever, it’s fun.

* Obviously Dirty Bomb came out before Overwatch, so it’s not technically Overwatch-esque, but you know what I mean.