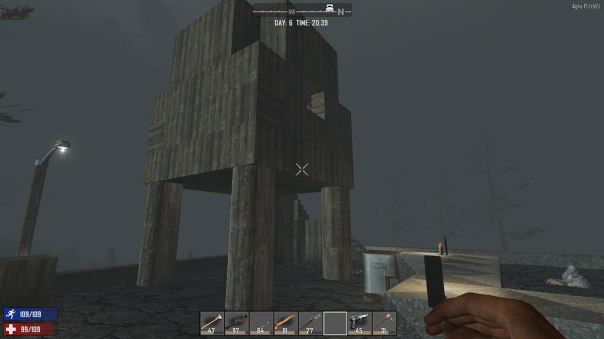 7 Days to Die (7DTD) is a fairly robust post-apocalyptic survival sandbox game that features deformable terrain, zombies, and the titular over-the-top weekly attempt on your life. I played version 15.1, and the game itself has been in alpha since December 2013. I just purchased it in the recent Steam Winter Sale for $10.

As with most survival games, you start out mostly naked with limited supplies. Run around, punch some trees, craft a Stone Axe that will be your primary tool for most of the game. The nice thing is that just about every single thing in the game world is able to be manipulated or destroyed. Craft a Stone Shovel early on and you can pretty much dig to bedrock. Or just dig a large moat around your future fortress. Then fill it with wooden spikes.

The zombies in this game are fairly standard walkers and runners, at least as far as I have seen. There is supposedly a “heat” system in place that determines whether the zombies will be attracted to your location, and the zombies themselves apparently can hear you (including the noise you make opening your inventory). Oh, and smell you too, if you happen to be carrying any meat. In practice, there will basically be zombies around at night no matter what you do.

Further back shot of home.

Speaking of zombies, there is an interesting interaction with them and the game world. Everything is destructible, remember? That also means by zombies. While they can certainly try to break their way through windows and doors, there is nothing stopping them from literally banging their way through the walls either. Even elevated positions are not immune, as zombies with readily take their rage out at anything near your location, including any sort of support structures.

Oh, and have I mentioned that there are (rudimentary) physics in the game? Alpha is alpha, so there are some goofiness like floating candles and such, but buildings can absolutely come tumbling down if enough supports are destroyed. (Cue ominous foreshadowing.)

Mechanically, the game is… in an interesting place. The early game feels fantastic. Looting feels extremely rewarding, as you can get some rather extreme rewards from any random pile of garbage. Things get weird in the mid-game though, around the Iron stage of crafting. At that point you are going to need a standard, defensible base to craft a forge, and then start harvesting a ton of resources. If you haven’t looted some critical tools before the Forge though – such as a Cooking Pot – you almost might be better off resetting the game. You can craft such things, but it is so far along the “tech” tree that most of the benefit is moot. 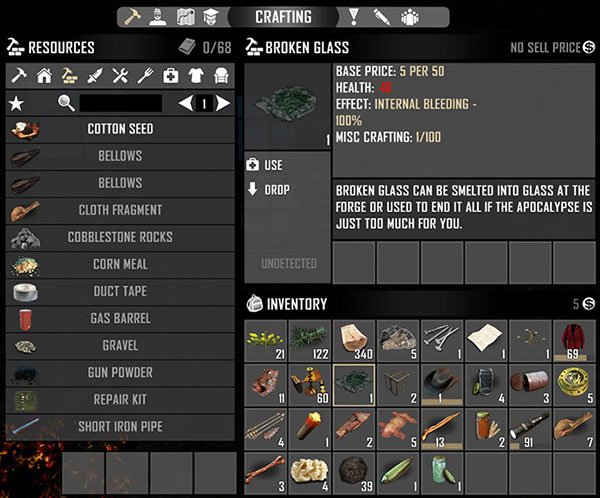 It’s always nice to have choices.

Speaking of tech trees, there is a rudimentary leveling system in the game, somewhat similar to Ark. Honestly, the implementation needs some considerable iteration, as it is not intuitive at all. There are some “big” skills that cost 10 points per rank, and grant you thinks like faster Stamina regeneration or bonus damage to blunt weapons. There are also skills that only cost 1 point each, such as Mining, which are naturally raised by performing the skill in-game, but can be purchased outright. Then there are other ones, such as Leather, which just straight-up grants you the ability to create leather. But there are also schematics in the game that are required before you can craft certain items.

Like I said, the Skill/Leveling system needs some work. It feels good seeing your crafting skills naturally improving, but you also run into the Oblivion problem of incentivizing, say, crafting a hundred wood clubs to power-level your way to the next unlock. It also irks me a bit that Iron and Steel take the same materials, with the latter just being kinda arbitrarily locked behind “Construction Tools X.” Some kind of progression system is good, but I’m not sure this one is the right one.

Overall though, I am both impressed and pleased with 7 Days to Die thus far. I put in around 10 hours in two days, and will probably be stopping here. On my second character, I built a sort of wood treehouse on the roof of a gas station, and survived the 7th Day horde attack with relative ease. As I started digging a moat around the perimeter in anticipation of the next one, it occurred to me that playing any further was likely to result in me extracting all of the fun out of the game before it is fully implemented/tweaked.

Posted on January 11, 2017, in Impressions and tagged Alpha, Crafting, Minecraft, Zombie Apocalypse. Bookmark the permalink. Comments Off on Survival Survival: 7 Days to Die.