Maybe there was some fanfare somewhere, but it came as a complete shock to me that Ark came out of Early Access this past week. As in, it’s fully released. It even has a Big Boy Pants price going on:

Deleted my prior saved game and started fresh on a “Single Player” server. The results were… rough.

The early-game in Ark is essentially broken as shit. I spawned in the “Easy 3” section of the default Island, which puts me on a beach. The first few minutes is the traditional Minecraft experience of punching trees to create tools. As you gain levels, you can spend Engram Points to purchase schematics according to your level, which kinda allows you to differentiate yourself between a builder or scavenger or whatever. Which is fine, but particularly sucks in single-player considering that I’m level 10 but still can’t build a Thatch house (since I went for weapons).

The real problem though is the absurd difficulty spikes. The beach where I spawned has a cliff face blocking access to the interior of the Island, and the water is filled with massive sharks. No matter which direction you travel down the beach, there are extremely aggressive raptors essentially trapping you in a corridor of death. You can respawn after being eaten, but whatever items you were carrying will have been dropped, and the dinosaur responsible will still be by your corpse. 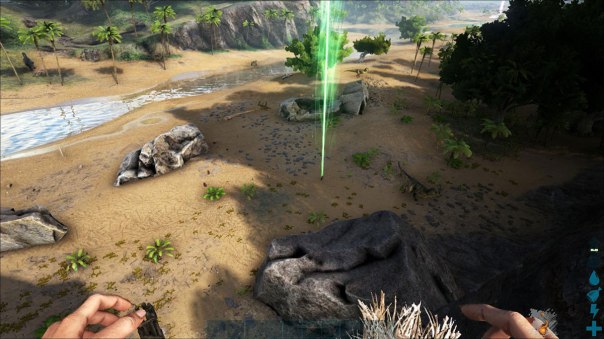 Oh, and your items despawn after 15 minutes.

In other words, in the early game, consider your former items to be permanently lost. Which wouldn’t be too bad if not for the fact that getting back to some baseline of combat readiness requires you to punch trees, craft a Pick, mine some stone, create a Hatchet, gather some wood, then make some Spears. Oh, and hold E down when near about two dozen bushes so you can craft some clothes. All so you can maybe engage some raptors that you cannot outrun and will likely kill you. So you can do the whole thing over again. And by the way, you can actually spawn into the game right next to a raptor or T-Rex and start getting eaten before you even have full control of your character.

If you make it past this early game though, you can craft a house and a bed that will let you respawn at a stationary location. And perhaps build some storage containers filled with surplus equipment, so that you aren’t starting from zero every time.

This terrible beginning experience will not deter my Sisyphean struggle however. Part of the reason I stopped playing Ark 1.5 years ago was the terrible optimization that caused my PC to run it at 24 FPS max. With some settings tweaks, the game runs basically around 50 FPS at all times now. I’m hesitant to say everything is fixed on this front though, because I have a GTX 1060 now instead of a 970, so your frames might vary.

In any case, what I’m curious about is how the single player portion will play out. Supposedly there is an actual storyline involved, rather than this being a pure sandbox experience. [Fake Edit: Nope, no story] I routinely boot up 7D2D despite there not being any particular narrative, but the fundamental fact is… I like these sort of survival games. Ark scratches that “collect hundreds of Wood to build things” itch, in spite of being unbalanced as hell thus far. So, I will persevere. And should the boulder roll back down, I shall smile as I walk back down to push it up again.

At least, unless I spy a more interesting boulder somewhere else.