The latest Humble Monthly bundle has Destiny 2 as an early unlock. I’ve been subscribing month-to-month for a while now, and this was a no-brainer month to pay early. 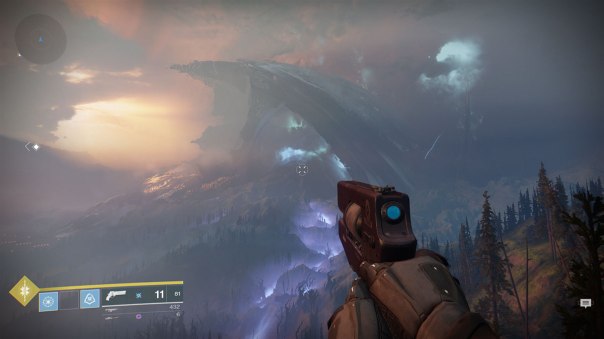 Destiny 2 is the much maligned sequel to a game that should have been ported over to the PC the first time around. I am well aware that the endgame sucks, and that the (short?) campaign really just serves as a vehicle for expensive, disappointing DLC. Oh, and they actually removed content from the base game when the first DLC came out. Classic Activision Blizzard. Still, $12 is $12, and I wanted to see this train-wreck for myself.

You know, as a member of the Press©.

First impressions? It is a staggeringly beautiful game. Skyboxes are skyboxes, but D2’s are great. The gunplay thus far as been as good as they say as well.

Once out of the immediate tutorial area, I found the sort of free-roam mechanics rather interesting. The first mission had a recommend gearscore Power level of 30, and I only had 20 at the time, so I stuck around and randomly killed enemies with other strangers until enough loot dropped to take me over the finish line. There were periodic public events, so things didn’t take too long, but it was interesting seeing this sort of MMO-ish Public Quest mechanic in a FPS. I’m sure things get significantly less interesting once you’re no longer getting upgrades, but until then… wheee!

Regardless, I am still super early in the experience – or maybe not… heard the story is like 5-6 hours? – having just unlocked the free-roam areas on Titan. Not sure that I like the rock-paper-scissor style of weapons though. Yeah, it’s fine have energy weapons be better at breaking shields than kinetic weapons. But having energy weapons deal less damage to normal mobs than basically any kinetic weapon? That means I basically only have the one weapon to use 90% of the time. Also disappointed that fun stuff like shotguns are limited to the “power weapon” slot that competes with grenade launchers and such.

I’m basically treating this like a non-cel-shaded Borderlands, so I’ll enjoy the ride until I don’t.