← Fulfillment vs Excitement
Ghost of Fun Past →

One of the games I have been playing in relatively short bursts is Hollow Knight.

I am usually skeptical about games with nigh-universal praise, because I’m fundamentally a cynical bastard at heart. But Hollow Knight is really pretty good. Amazing, even. It can also be frustrating, anxiety-inducing, and exhausting overall.

Basically, Hollow Knight is a Metroidvania minus the XP. There is side-scrolling exploration, a lot of backtracking once you unlock new movement abilities, and some fairly lethal combat with severe death penalties. Specifically, you drop all your Geo (currency) upon death, and if you die again before reaching your corpse, it disappears forever… until you get some special items. There are no particular “instant death” mechanics, but the number of invincibility frames available after taking damage is quite small, sometimes leading you to take more than one “hit” from the same attack.

I would describe the game overall as a mixture of Salt & Sanctuary + Ori and the Blind Forest, if you played either of those two. Or a melee-based Super Metroid. 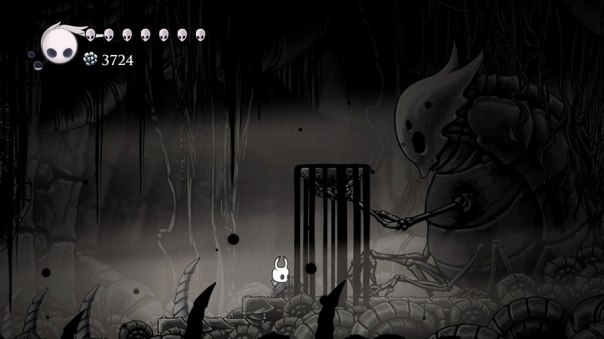 What deserves every accolade attributed to it is the art and music of Hollow Knight. Beautiful, haunting, perfectly mood-setting. For a weird game about bug ghosts – at least I think that’s what this game is about – the visuals and soundtrack pull you in and makes everything… belong. Coherent. Even when there’s a lot of vague nonsense going on, you just let it slide right off as you go explore the new area or experiment with some new ability.

Like I said before though, the game is exhausting. When you reach a new area, there is no map until you find a specific NPC somewhere on the level. Then you have to find a Save bench before your map can be updated. Because reasons. This leads to play sessions that begin and end with Save benches, even though I think you can technically do a Save & Exit, as it’d be difficult to know where you left off. Plus, some bosses seem like total bullshit until you figure out the trick, and the game makes sure your face in rubbed in the carpet on the walk back to your corpse. Which can lead to behavior like backtracking all the way to a shop to spend all your Geo “just in case,” because Stiff Death Penalties are Good Game Design, Guys.

Whatever. Hollow Knight is fun despite its annoyances, but don’t assume you’ll be able to just play the game casually.