So, about 100 hours later, I continue to play Starbound’s Frackin’ Universe (FU) mod.

Just to reiterate: FU is a mammoth mod that fundamentally changes complicates nearly all aspects of the vanilla Starbound experience. For example, the vanilla experience has you leveling up an Environmental Protection Pack (EPP) to survive the elemental rigors of planetary progression – from no breathable oxygen to radiation immunity to cold immunity to fire immunity. Each EPP upgrade was a strict upgrade, incorporating all of the immunities of the prior ones. This progression path ensured that you went to the correct systems in the correct order on your journey to defeat the giant tentacle monster final boss.

In Frackin’ Universe, all that is thrown out the window. There are now at least 33 EPPs with wildly varying effects, none of which give you blanket immunity to everything. You are expected to use the proper EPP with a relevant Augment (21 choices) with a corresponding armor (101 new sets) tailored to the planetary conditions. Which have gotten more granular as well, of course. A fiery planet might have three degrees of flammability, tied to 20/40/60% resistance levels, affected by all the previous items plus your race’s innate resistances (if any). Having high resistances might be good for normal exploring, but extreme weather events might end up overcoming said resistances too.

Does all of that sound too complicated? I agree. 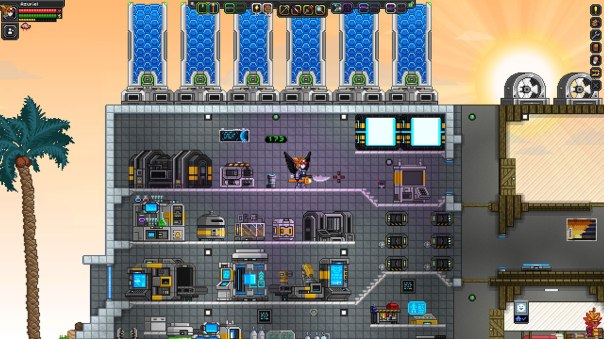 My current base. Not pictured: Healing Water hot spring.

What has won me over are all the changes made to support the above complexity. Dozens of new elements and ores have been added to the game. There is now a large number of completely new planet types, and every planet has been infused with micro-biomes. Difficulty is increased across the board as well, making the exploration and exploitation of these new worlds require a lot of attention.

After every night that I play this game, I spend a few minutes in bed thinking about what I plan on accomplishing during the next playing session. “I need to restock my supply of lead.” “Okay, I built the armor set that gives me immunity to proto-poison, so I should be able to get some Protocite Ore.” “I should really create an ocean base for the free water.” “Why haven’t I gotten my crop situation in order?” It never seems to end. Which is great because, at the moment, I don’t want it to.

That said, I did struggle in the beginning. There was too much to take in. There are some tutorial quests that kind of guide you around, but almost all of them simply exist to get you to construct one of the many new crafting stations and leave you staring at yet another huge list of miscellaneous nonsense. The only way past the Analysis Paralysis is to hyper-focus on the one thing that you want to craft, and follow that one thread all the way to the bottom.

A few days ago, I finally constructed my Terminal network. What does it do? It allows me to link together a bunch of storage containers and then output the results on terminal stations placed around my ship, such that I can type in a name of something, then have it spit out the requested item into my inventory. You know, functionality that… exists by default in most of these sort of games. But it doesn’t here, and now it does, and I feel very satisfied about it. 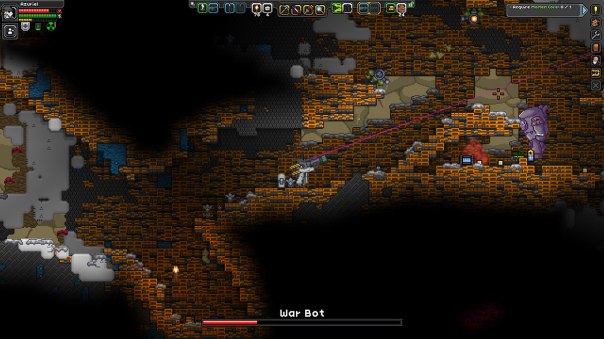 Sometimes you have to be unfair.

One additional positive I want to mention here is that I like how the mod author(s) included means to bypass some of the systems. Between the various vendors in the new science outpost and a craftable Ansible Network station, you can outright purchase a lot of the more rare ores and components, if you haven’t been able to track down their locations on planets. It costs pixels (aka money), sometimes A LOT of pixels, but it is there as an option if you just so happen to need three more bars of Quietus Ore or whatever.

What I will say though, is that not every aspect of the game is especially coherent. The Medical Station allows you to craft healing items, like in the base game. The Medical Kit II recipe requires Honeysilk Bandages though, which requires you to to engage with the whole Beekeeper system. Meanwhile, Medical Kit III goes back to more typical FU materials, and you don’t need to have crafted the prior version to unlock this one. The armor system behaves similarly – there are redundant sets (sometimes a good thing), many completely useless ones (comparatively), and a few that are clearly superior in every way.

Oh, and you can craft booze too. Unlike the Bee things though, I can’t tell that any part of it is necessary. Maybe for roleplaying purposes?

In any case, there it is. After ~100 hours of mucking about, I feel like I’m within spitting distance of some of the best armors in the game, and likely the end of novel experience. The skeleton of Starbound’s linear story remains in place, but I’m not sure that I’ll continue on with it once I get bored of flying around. Unlike other random-gen games, Starbound doesn’t benefit from multiple playthroughs, as you can pretty much go wherever you want, making anything you want, as soon as you want.

That is, of course, one of it’s biggest strength too.