Pebbles Can Still Ruin Your Day

Pebbles are small, but if one finds its way into your shoe and you can’t get it out, it can be enough to ruin your day. Or in this case, your gaming experience.

Another pebble: needing to walk around with Alt held down all the time

I started playing Divinity: Original Sin 2 (DOS2) recently, and it’s been fun thus far. There are a lot of interesting new design directions this time around, and I might talk about them in a different post. In this post though, we need to talk about a pebble: inventory management.

…actually, that might not be the root of the issue. This pebble has layers.

DOS2 and the series in general makes a big deal about the autonomy and uniqueness of each character. Characters have origin stories, personal quests, unique special abilities, and their own dialog options. Talk with one distraught woman as Ifan and she shouts “stay away from me you disgusting pig!” Talk with the same woman as Sebille, and you’ll hear her story. It’s immersive… to a point. It’s also awkward, considering you are a player controlling four unique beings, one of which is supposed to be the “main” character.

The awkwardness extends out into the game proper too. Some of the “Civil Abilities” you can put points into are Persuasion and Bartering. The former will let you overcome conversation checks, while also improving your discount with a vendor; the latter improves just the latter. That’s fine, right? It’s typical for CRPGs to essentially encourage specialization, such as you have someone really good at disarming traps, someone running interference for your wizards, and so on.

It’s 2% now, sure, but it’ll be higher later… and not even the point

The problem is when the “main” character isn’t the one with the Persuasion skills. I had been playing for about 5 hours and wanted to offload some goods at a local vendor, only to realize that the person with the biggest discount wasn’t carrying any of the merchandise. And there was zero way to move items around except one at a time. That’s the pebble. There’s a “workaround” where you stash everything inside a backpack that you can then pass around, but that still involves manually moving one item at a time into the backpack. Why isn’t there a “move all items” option?

My characters are like level 3, and the difference between the “main” character I had been controlling and scooping up all the loot with and the guy with the highest discount is 2%. No big deal, yeah? Also, there is apparently a magic mirror in Act 2 or whatever that allows you to freely respec all your characters any number of times, so I’ll be able to solve this Persuasion situation to make my “main” character also be the primary seller.

Like I said, it’s a pebble, not some bottomless chasm.

…at the same time, this little pebble is drawing my attention to the fact I’m walking on a trail full of them. With sandals. I made Ifan a Summoner, who is apparently going to need to be the most Persuasive out of the bunch if I want to be using him to click on treasure chests and dead bodies. Or I could keep the Red Prince as the sell-bot since he’s already the best at it, but that would mean I’ll need to be using him to pick up stuff and talk to people. That would mean I’ll miss out on Ifan’s dialog options though, so I’ll need Ifan to be the sell-bot. But he’s a Summoner, not a warrior, so my carrying capacity is lower. I guess I could move crafting material around to compensate… 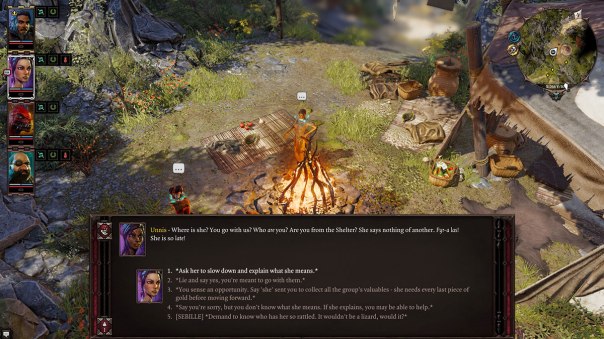 Significantly more chatty than when I clicked on her with Ifan

By the way, there’s another Civil Ability called Lucky Charm that gives you a chance of finding special loot in every container you check. Originally, this proc’d only if the character who had the skill checked the container. It’s since been patched to be party-wide, which is nice. Because that is otherwise insane. Which is what is kinda feels like for the rest of these abilities.

All of the above because I noticed a 2% discount between characters. But try walking for 80+ hours with a pebble in your shoe and tell me it doesn’t become a big deal over time. And make you question why you can’t just take off your shoe for a second and get it the hell out.