The Epic Game Store has poached another high profile new release from Steam: The Outer Worlds. 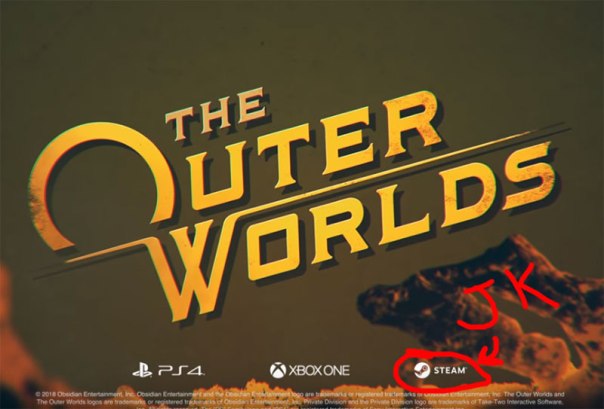 As with Metro: Exodus, this is a timed exclusive meant to expire after 1 year. Unlike Metro though, Outer Worlds is also slated to be released on the Windows Store as normal. So if you really wanted to play it Day 1 without using the Epic Store, you can. Of course, that means… you have to use the Windows Store, which comes with its own issues.

The backlash from the continued poaching of games is pretty widespread on Reddit (and Youtube comments, etc) although there is also a tremendous amount of counter-backlash. Most of the counter-arguments seems to boil down to “why so serious?” Which should not be unexpected from /r/SubredditDrama or /r/GamingCircleJerk users, of course. Nevertheless, it is question worth asking.

But before I get to answering it, let’s review why Epic is doing this in the first place:

When asked for his take on these reactions, Sweeney reiterated the aim of the Epic Games Store is, “breaking the 70/30 stranglehold that’s pervaded the industry for more than a decade,” and that its methods in doing so were never going to please everyone.

“Changing the way that games are sold is a big disruption to everybody,” he says. “I understand that — I’ve personally unsubscribed from Netflix twice as their selections of movies changed. But this is a necessary step forward for the games industry if we want to enable developers to invest in building better games, and if we want the savings to ultimately be passed on to gamers in the form of better prices.

Ah, it’s all pure altruism for the good of all gamers.

UbiSoft agreed to a co-exclusive on UPlay and the Epic Games store. Epic Games seeks exclusive games in order to have a unique lineup of games so there’s another reason for gamers to come to our store.

In fact, here are the brass tacks:

That’s one of the biggest complaints about the Epic Games Store: it lacks features. Indeed, it didn’t even have a search tool until recently. But Sweeney points out that there’s no use taking on a “dominant storefront” (ie, Steam) unless the exclusives, prices and developer relationships are there.

“It’s nearly perfect for consumers already… There is no hope of displacing a dominant storefront solely by adding marginally more store features or a marginally better install experience,” he said. “These battles will be won on the basis of game supply, consumer prices, and developer revenue sharing.”

It may seem like a “duh” moment, but I just wanted to reiterate the fact the Epic CEO admits there is no other way to compete with Steam on the merits. That the Steam store is “nearly perfect for consumers already.” And thus, the only way that the Epic store can hope to compete is by restricting the game supply via exclusivity agreements.

Which is a bit of a weird way to foster “competition,” don’t you think?

If you want to know why I consider Epic’s shenanigans as anti-consumer, timed exclusives is it. Competition between storefronts means I have the choice to purchase it from Steam or from Epic or whomever. For some reason, Sweeney feels like competing on price or developer revenue sharing isn’t enough. Possibly because Epic has a shitty store lacking in basic functionality. Forcing people to use said store if they want to play X game isn’t doing consumers any favors, even if it’s hypothetically “for our own good” years from now.

I get it. Disruption is required to break into mature markets. But typically – or at least ideally – the disruption comes out in favor of the consumer right away. Uber and AirBNB and Netflix and all the rest broke monopolies by offering not just lower prices, but superior service/opportunities in most cases. Uber didn’t just swing big-dick Fortnite money around and buy up all the cabs around the airport and tell people that the next five years are going to be super exciting for cab drivers.