NoizyGamer has a post up contemplating the health of EVE. Before its sale to Pearl Abyss, the actual EVE revenue numbers were hard to get. Now they get reported every quarter like a lot of other (Korean) companies. NoizyGamer’s last paragraph concludes:

Yes, EVE only beats Aion in revenue for the first half of 2019. But I can’t help but think if CCP and NetEase had managed to get Serenity up and running in China again, EVE would actually beat Guild Wars 2’s performance. If anyone had said that, outside of China, EVE was performing financially as well as GW2, would anyone have believed that statement?

Within the context of the post, EVE is being compared to GW2 because a gaming journalist was observing the fact that a hardcore MMO and a casual MMO were making roughly equal amounts of money. That… somewhat deflects from what otherwise seems like an asinine comparison between a subscription MMO and a B2P fashion-endgame lootbox grinder. The journalist goes on to tweet:

Just as an FYI, my initial thought on this wasn’t to say “GW2 better than Eve lol” but to be a little confused over the “Casual games are all the rage, it’s all companies should make” vs. “Companies should make more hardcore games rather than appeal to casuals” dichotomy. 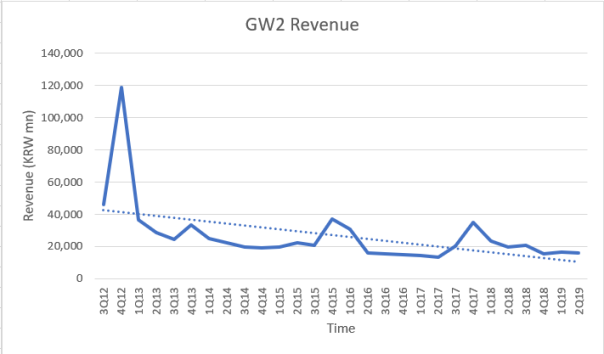 Even just looking at Guild Wars 2, the comparison is not particularly flattering. Revenue for GW2 has been stagnant or declining since 2016, with the business model mostly consisting of the fumes of stale farts locked away in lootboxes, along with a 0.1% chance to obtain the only thing the art department has been working on for six months. The B2P model and horizontal progression and endless grinding for the fashion endgame do indeed make GW2 among the most casual of casual games, but why make that comparison and not, I dunno, EVE vs FF14?

Incidentally, remember Blade & Soul? That NCSoft game has consistently done ~30% better than GW2 since at least the end of 2014.

This is not necessarily to scoff at numbers. Based on today’s conversion rates, GW2 made $65.9 million in 2018. The very worst quarter in GW2 history (2Q17) was still $11.1 million. There are plenty of game developers who would love to release a game that makes $11.1 million in a quarter. But when just the mobile version of Hearthstone pulls in $165 million in 2018, which is down significantly from 2017, the casual vs hardcore business model gets put in sharp relief.