I am beginning to ponder whether “emergent gameplay” is dependent on what might otherwise be considered “extraneous details.”

In RimWorld, the details are the devil. Each and every creature that exists drops its own kind of meat when killed, along with its own type of leather. Forty-eight different kinds of leather, specifically. On the one hand, this can get annoying when your warehouse fills up with a dozens of different stacks of the same sort of resource (e.g. leather) that can’t be blended together to craft a piece of clothing. On the other hand, the specificity of leather allows for the now-infamous “Human Hat” situation. 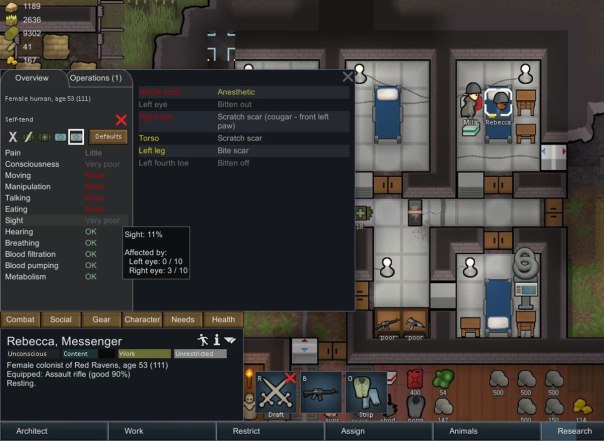 That would explain her poor shooting skills…

Another situation is wounds/scarring. When a colonist takes damage, they can be injured across their entire body in ultra-specific locations like… middle-finger of their left hand. Or their eyeball. I have one colonist with a shiv-scar in their brain. I did not find out about that old wound until two-dozen hours in, and finally made the connection as to why this particular person was slower than others at Researching (brain injuries basically reduce productivity by 50%).

This specificity occasionally leads to emergent gameplay. Another colonist (Redfields) was addicted to Smokeweed, developed a small tolerance, which led to a large tolerance, which led to Asthma in both lungs and a small carcinoma in the right lung. I was tempted to just kill Redfields and hope to recruit a different person – keeping someone alive and happy through withdrawal symptoms is a real pain in the ass – but I decided to give it the ole’ college try.

So after the next pirate raid, I captured one of the downed raiders, stabilized them, and then harvested their lungs. Which I then transplanted into Redfields.

Everything was fine up until Redfields developed a small carcinoma again in one lung. “Goddamnit, Redfields, those were brand new lungs! Well, to you, anyway.” Luckily, I realized that I could excise the tumor directly, which my doctor did successfully. Once Redfields made it past his withdrawal period, I went ahead and rewarded him by removing the eye that had a permanent LMG wound and replacing it with a bionic eye. Now, he’s one of the best sharpshooters in my colony.

I feel the invisible hand of fate moving once again

He’s still missing a nose though. Not quite sure how he lost it, and I don’t there is cosmetic surgery in the vanilla game. Oh well.

The point is that emergent gameplay is kind of predicated on there being many, many different points of potential interaction. If damage was only registered to more generalized sites, or abstracted away entirely into HP, there is no Redfields story.

Then again, this can be done on the AI side instead, I suppose. There are not a whole lot of player-moving parts in GTA5, for example, but I think we have all seen some outlandish things occur in that game that come about because of random variance in civilian (or cop) behavior. Or in the Far Cry series. A “normal” shootout suddenly turns into a 5-car pileup, a wildfire erupts, and now there’s an angry bear or mountain lion or eagle joining the fray.

It makes me wonder about how emergent things might work in an MMO setting though. Project: Gorgon apparently has a whole lot of nonsense embedded in it – players turning into Cows and leveling Cow skills – but for the most part, I think most of us prefer less fiddly bits, rather than more. For one, it’s much harder to balance, and for another, it complicates social dynamics. If you aren’t optimal, you’re sub-optimal, which means you are holding the group back with your selfishness.

This pushes emergent features more into the AI side, which sounds like the direction Blizzard is heading. At the same time, would you even want an MMO where the mobs are intelligent and a real challenge? Like, all the time? In an open-world single-player game, absolutely. But elsewhere? I’m wondering if emergent social interactions is more than enough emergence for MMOs.

I finished GTA 5 a few weeks ago now, and my experiences can be summed up with this:

The game overall was actually phenomenal, albeit strangely balanced. It has been ages since I played GTA 3 and Vice City, but I remember those games being centered on steady progression with gun unlocks and even vehicle selection. For example, you couldn’t find the fastest cars in GTA 3 until the first bridge gets repaired, which only occurs after finishing several story missions.

In GTA 5? Some of the best cars are practically outside your first house. Indeed, several more things appear to be cash-gated too – gun unlocks and such – but completing a successful heist towards the beginning of the game ended up giving my characters over a million dollars apiece. Body armor costs $2500? No problem. Pretty sure I went ahead and unlocked most of the guns right away too. 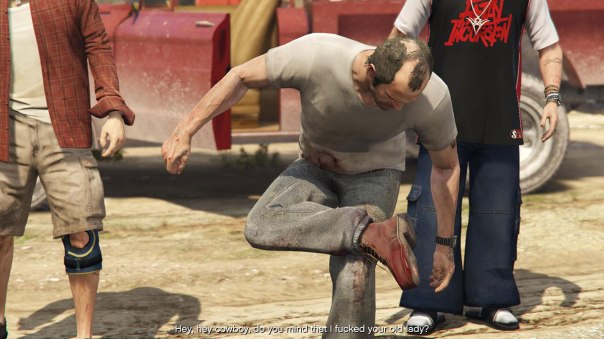 The best of introductions.

One of the more consistent pieces of feedback I heard about GTA 5 going in was that nobody really liked Trevor as a character. Turns out Trevor is one of the more authentic characters in the game, IMO. Granted, he’s a batshit insane psychopath, but the body count of the other main characters are nearly as high, and yet they act like it is no big thing.

I did try out the GTA Online aspect for about a hot minute. One of the tutorial missions required me to go to a specific clothing shop that was currently being camped by a player with an attack helicopter though, so I Nope’d right out of that server. This aspect of GTA is apparently wildly profitable (to the tune of $500 million), but I have little desire to grind (or pay) my way to progression in this sort of game.

Christ, the visuals are amazing.

The single-player portion of the game though? It was a blast to play through. The three-person narrative worked out well, the graphics were sublime and ran at a silky 60 FPS with a GTX 970 the majority of the time, and there were plenty of emergent shenanigans. I barely played GTA 4 or San Andreas, so it’s hard for me to say how much the formula has improved, but the game is quality regardless.

If the cornerstone of MMOs are the social aspects, then I have a question:

Why do game designers make it so absurdly complicated to find like-minded individuals?

I started playing WoW like I imagine a lot of people did: alone. And much like I imagine happens with guildless new players, I was ninja-recruited in one of the starting zones. From there, some elder player took me under their wing, helping me with that difficult final Ghostlands quest, getting me into a BG for the first time, and so on. I had a really great time.

Then… the guild imploded while I was questing in the Hinterlands. The game was no longer fun, and I abandoned my Blood Elf warlock. Since I had already paid for the WoW box and TBC at the same time, I decided I would at least try to get my money’s worth and roll a draenei on a new ‘Recommended” server. Leveled alone, twinked out a bit at levels 18-19 and 28-29 (I thought the AB boots were godly, even if you had to lose 30 games to get them). And then I ran that fateful Scarlet Monastery as a paladin tank, with three people who were friends IRL. I must have made some kind of impression because they invited me to the leveling guild they were in, named Invictus.

When I quit WoW a few months ago, I had been the GM of Invictus for over two and a half years. I saved the guild from abject destruction twice before taking the reins myself, and we graduated from leveling guild to Kara-clearing to eventually the #1 progression 10m-strict guild on the server in Wrath. For a time we had an absolutely brilliant raid roster of people that got along with each other, had similar interests, and otherwise had an ineffable chemistry which peaked in Ulduar, something that absolutely could not have happened at a better time in the game. Seriously, I still get misty-eyed looking back on the Ulduar montage I filmed (and seeing the Guild chat spam in the video after those kills almost makes me want to re-sub).

Thing is, it was completely goddamn random that any of us met at all.

To be clear, I am not referring to the general sort of Destiny vs Coincidence of my original guild imploding, my “choosing” Auchindoun over another server, or even my decision to tank Scarlet Monastery that night (and remember, this was back in TBC so Alliance characters had to be pretty damn serious about making the 15+ minute trek across three Horde-heavy zones). Anyone can talk about “what if?” until they begin to question the very nature of existence itself.

No, I talking about how Blizzard and most other MMO developers seem to rely on emergent social groups in their social MMOs.

When I met Sproll, Ariyal, and Duerim (now Boryenka) that night in Scarlet Monastery, none of us really knew how much we had in common. I wish I remembered what it was that led them to invite me to Invictus, although it was probably something dumb like my being guildless at the time. All three of those guys ended up being core officers of my benevolent Invictus dictatorship over the years, and I still talk with Bor to this day outside the game – we played the new Portal 2 co-op DLC a few days ago, for example.

If LFD existed back in those days, would I have met them in Scarlet Monastery? No. Would I have met them somewhere else on Auchindoun (it’s a low-pop server after all)? Maybe. But I still cannot get over the ridiculousness of the design insofar that this sort of emergent social behavior is encouraged in the most asinine way possible: randomly throwing people together and seeing what sticks. That is why you will never see me agree with the notion that LFD destroys communities. A lot of us bloggers lucked out in the Wild West fashion, but how many untold millions failed to get that pug moving and quit from boredom before the endgame? Is that really a “community” worth saving?

What I will agree with is that the current system is also dumb. The genre seems so stuck in the goddamn Dark Ages when it comes to social networking that I am genuinely surprised anyone makes something more than superficial “friends of convenience” at all. Players need to be given the tools to find like-minded individuals. There is a danger to creating insular cliques, of course, but if everyone agrees that MMOs are better with friends, this antiquated grouping design of blind coincidence needs revision.

Stay tuned for the exciting conclusion featuring concrete suggestions, coming (to) In An Age near you.