So, it has been almost 6 months since I started playing PlanetSide 2. Am I still having fun?

Everything a sniper likes to see.

Aside from a brief 1-2 week experiment with Outfits (aka guilds), I continue to have fun despite playing solo. While many of the problems I outlined in my prior article are true regarding organized PvP, they are perhaps a tiny bit less true now. Anti-Aircraft units have not been nerfed, but I am a bit more cognizant of of where they might be and thus avoid them. Or perhaps, given the server mergers, there may simply less people playing.

The biggest “problem” I consistently have with PlanetSide 2 are its break points.

Have you ever sat down at an MMO (or any game) and find yourself easily able to play for 2, 3, 4 hours at a time? That sort of thing doesn’t happen by accident; it’s part of a game’s intentional design. In PlanetSide, I occasionally sit down prepared for a long night of gaming… and then log off after 30 minutes. Finding a compelling fight isn’t necessarily the problem: the problem is finding the next one.

Momentum can stall. Spawning at a Sunderer and throwing yourself into the meat-grinder attack of a base feels awesome. And then you win. Err… what now? Sometimes the attacking force splits up. Sometimes you stay together as a cohesive unit, only to find that the next base you find is empty. It can take 8+ minutes to cap even an empty base. That is eight literal you-only-have-41 million minutes of your life, staring at the wall. 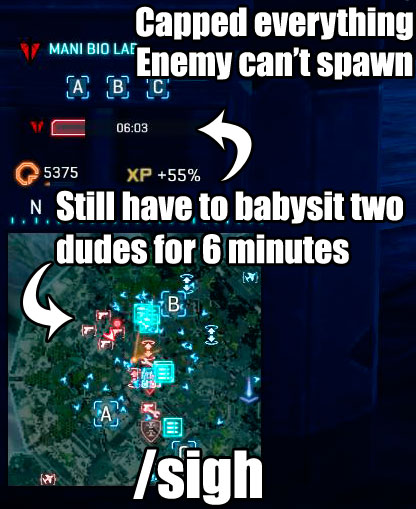 Thankfully, this shit should be changing soon.

Part of why I stick with this game though is because of how much communication and iteration there is between the devs and the community. There are major game updates roughly every two weeks. The community asked for test servers so broken mechanics and (new) bugs stop appearing, and now we have a Public Test Server. The devs are pretty active on the Reddit forums, soliciting suggestions and advice.

I don’t think the designers have all the right answers – the devs clearly have some issues coming up with interesting Vanu mechanics, not unlike the issues Blizzard has with the paladin kit – but they are visibly trying. I am excited in particular regarding the upcoming lattice system. Assuming everything works, this could go a long way in fixing the problems with the gaps in engagement I experience after capping a base. And changes to the capping of a base – where destroying the Spawn Control Unit allows an attacking team to actually move on – will lessen the dead time after overwhelming a position.

So… good news all around.

Still such a thrill rushing an enemy base as a spontaneous group.

If you are curious about the personal effects of Cert-Gate a month later, let me assure you that I don’t feel like it has changed all that much about the way I play. Yes, I have most every upgrade. Yes, I care a bit less about capping empty bases, given that I don’t feel like the 2-5 bonus Certs are worth 2-5 minutes of my time. On the other hand, I naturally have a hard time committing all of some limited resource to something. For example, I have ~2800 Certs left out of my stockpile. There are two guns I could buy with those Certs… but I won’t. Because I know that there will be new shiny things coming out in a few weeks, and I like the option to purchase those instead. But I might not buy those, and instead hold out for the new gun releases after the next batch. And so it is almost as if my 2800 Certs don’t even exist. It’s a bit irrational, but that’s how I roll.

So, yeah, I’m still having fun. PlanetSide 2 isn’t my main game (largely because it can’t be, given the breaks), but it is still a game I constantly think about and can’t wait to play for a bit when I get home. And the best thing? I don’t have to make apologies to anyone for those days when I just don’t log in.

Who is enjoying the MMO single life? This guy.