Age of the MOBA

According to EEDAR, by the end of 2015 MOBAs will generate more revenue than (F2P) MMORPGs in the North American market: 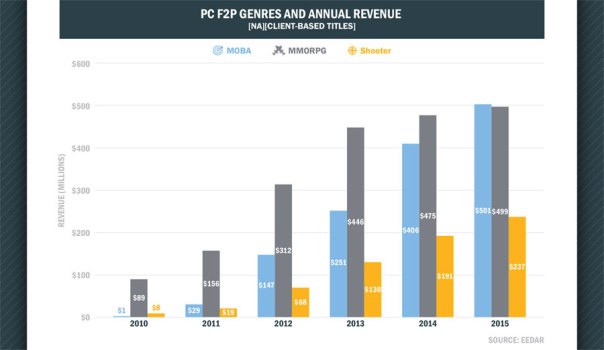 “Meteoric” pretty much covers it.

The difference is small – $501m vs $499m – but it’s impressive nonetheless for a genre that didn’t (formally) exist five years ago.

One thing is for certain though: MOBAs are the “new” hotness and are poised to overtake F2P MMOs either this year, or Soon™ in any case. Which is a fascinating turn of events for someone who really has less than zero interest in MOBAs specifically. Indeed, nearly every mechanic that make MOBAs “deep” are the same mechanics that make many MMOs terrible. For example, the whole Last Hit mechanic. Or having over a hundred different characters, many of whom are direct counters to others, requiring one to memorize a truly voluminous amount of minutia to succeed. You thought the whole Raid Dance memorization was dumb? Just wait until you spend time researching dozens of characters who don’t even get picked. Oh, and hey, I heard you like 40+ minute LFG fights were you (ideally) lose 50% of the time.

On the other hand, in the Venn Diagram for MOBA and MMO I wonder how much overlap there really is. Did some people leave WoW for League of Legends? What did they find on the one end that they did not on the other? Perhaps nothing, and the audiences are from two entirely different sources. Which really doesn’t answer the question of where the MOBA audience came from. Is this an entirely different generation of gamer coming to age during the rise of MOBAs? Or was this a deep pool of potential players who hitherto weren’t being serviced by existing products?

Maybe the answer is less complicated than I am making it out to be: MOBA players seemingly sprang from the earth because it’s all F2P. Easy to get into, easy to get hooked, and then easy to get monetized. As revenues approach half a billion dollars in NA alone though, this clearly is not a flash-in-the-pan phenomenon. Despite the MOBA saturation, revenue still increase almost 20% last year, according to the chart. You will undoubtedly have winners and losers in the market, but MOBAs are here to stay.

Which is… well, good for them. I’m going to play something else.

In doing the research for the last article, I came across this interesting August interview with Tom Chilton. It is a sort of “past 10 years, next 10 years” sort of interview, but here were the quotes I want to draw attention to:

Q. Each expansion clearly serves the game’s existing audience first, but there always appears to be a secondary goal of either driving new player sign-ups, or winning back lapsed accounts. Warlords of Draenor looks like it’s especially designed to win back lapsed players. Would you say that’s a fair assessment?

A. […] We are also trying to make things easier for new players. We have an improved tutorial. We’ve definitely found over time that the players we’re getting now are far less familiar with the standard MMO-slash-RPG mechanics than the players we got years ago were.

Frankly, that’s the biggest difference in terms of our subscribership. It’s harder to keep the funnel of people coming in to offset, inevitably, people not playing anymore.

So we’re making a lot of improvements there, teaching people how to move their characters, how to look around, and how to turn their first quest in, because we’re seeing that’s where huge amounts of people drop out.

Back in September, I posted a similar Q&A session with Ghostcrawler who basically said the exact same thing:

I’d like to know what Blizzard considers to be the big barriers.
Well *I* consider the biggest barrier being it’s a 3D WASD game with a movable camera. (Bashiok)
I agree. So does a lot of data. (Source)

Back to the Chilton interview though, he makes a point about how… well, let me just post it:

Q. Going back to the subject of 10 years, and talking about changes in the subscribership, different playstyles and different expectations, have you seen a shift in your demographics?

Chilton: We certainly have. Our demographic has gotten a lot older over time. A lot of that is because we have a lot of players who’ve been with us for 10 years, and now they’re 10 years older than when they first started playing. Our age has shifted up over the last 10 years.

That has interesting implications in that essentially the playerbase becomes more casual over time. As people get older and have kids and careers, they have less time to spend on playing the MMO.

It definitely influences how we evolve the content and trying to make sure that there are good ways to engage with the game that aren’t massively time-consuming.

Now, it is a pretty well-tread argument that players get more casual over time, for exactly the reasons mentioned: you got older, out of college, kids, more obligations, and so on. But I find it a little weird when combined with the prior quote from Chilton insofar as most of the new players coming into WoW are having issues with camera movement and turning in quests. I mean, unless WoW is literally your first RPG, you would think that most everyone coming in would have experience with similar mechanics from literally any other RPG in the last 10 years.

All of which is leading me to believe that, perhaps, most of the new players coming into WoW are precisely older people who haven’t played many (or any) RPGs prior to this. It could almost be poetic, if the players who started playing 10 years ago (and kept going) are recruiting their now-older non-gamer peers into the game because those are the only people they know. Hell, you can almost imagine this as a geologic strata forming: the MMO layer being compressed by the MOBA layer of slightly younger players, followed by the Minecraft generation.

None of that really describes what’s going on with the FPS genre or console games, but it’s a convenient narrative I’m rolling with.