I hit 90 last week on the paladin.

The funny thing is that the reputation concession to alts (i.e. 100% rep gains if you buy a token at Revered) has resulted in some strange behavior on my part. I still don’t like the paladin very much; I chose it as my first 90 because of other considerations, like how it was my only toon with max Archeology (mainly the BoA weapons). Combat as Retribution still feels clunky, especially if I miss with Crusader Strike. Exorcism, Judgment, Crusader Strike, then either Inquisition or Templar’s Verdict, then… wait for procs. Having a 6-second window to Flash of Light after a mob death is infinitely worse than a warrior’s intuitive and satisfying Impending Victory.

Regardless, since I am 90 though, I find myself doing all the dailies that I can. Not just because they are dailies, e.g. the sense that I fall further behind in my future, hypothetical endeavors, but also because I am already near Honored (or well into Honored) with these factions. It feels a waste to start leveling someone else up before getting the 100% rep boost. And thus I continue playing a class I no longer love, earning rewards I can’t use (Coins, Valor, Spirits of Harmony), for the possible betterment of a new main I haven’t even chosen yet.

Obviously I’m getting some form of entertainment, but it is not at the desired level.

On Sunday, I ran ~4 heroics with guildmates and walked out with 8-10 pieces of gear; I zoned in there with maybe two pieces of 450 quest blues and the rest crafted PvP gear. Ended up getting two Strength 2Hs, boots, chest, plus a smattering of tanking drops. As far as I could tell, my DPS on the runs was just shy of 40k, which I am assuming is decent.

Maybe the universe is trying to tell me something. In which case, let me tell the universe: make Retribution more fun.

The Grumpy Elf is not convinced that MoP talents are less cookie-cutter. Neither is Nils. The Elder Game thinks fiddling with talents at all is a waste of time.

All miss the point, I believe.

Let me begin with a quote from Bashiok I posted a few months ago:

Diablo (1) did not have skill trees, it was a feature added to Diablo II, and then more or less copied by World of Warcraft. Some could say to World of Warcraft’s detriment as it’s been struggling with how to cope with a skill tree system, which has huge inherent issues with very little benefit, for years. Diablo III, like Diablo II, is an evolution of the series and game systems.

I agree with that characterization of talent trees, specifically that they have huge inherent issues with very little benefit. Talent trees, as the way they are set up in WoW currently, give the illusion of choice. There is a good Extra Credits video called Choice and Conflict which talks about this issue. Essentially, the “choice” being presented in WoW’s talent trees are really calculations, not actual choices.

If you look up the EJ builds for your spec, chances are you will actually see where the Blizzard designers tried to give you choice in Cataclysm’s revamp. Here is the EJ build for a PvE Retribution paladin:

If you’ll notice, you have 1 extra free point floating around (technically you have 3, but nevermind) – this means there is literally nothing else that will increase your DPS. Choice, amirite? Well… no. Your “choices” are:

You may not be familiar with Ret paladins, but hopefully that comes across as outrageously boring, because it is. But what about PvP? Here is Ret in PvP: 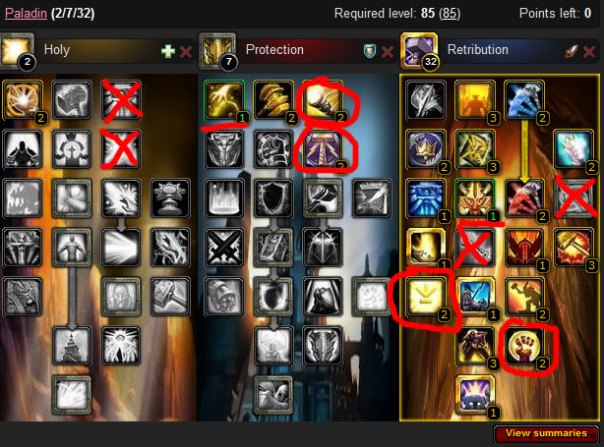 Know what changed? We got rid of Divine Storm (just AoE for trash), a talent that makes Crusader Strike scale with haste, and then just picked all the WoG-boosting talents and a faster HoJ cooldown. In other words, there is no differentiation there at all. There is technically another PvP build that sacrifices the faster HoJ cooldown for even more WoG healing, but that’s basically it. Ret’s Cataclysm choices are DPS vs HoJ vs WoG-boosting. Pick only one! Just like this new system, except only one choice instead of six.

For fun, I took the paladin tree and blacked out all the talents you either couldn’t get, or were identical whether you chose PvP or PvE. This is what it looks like: 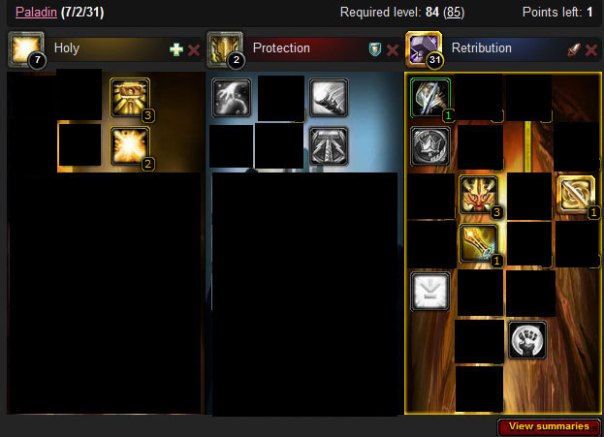 Ret paladins are actually a terrible example to use in the Mists of Pandaria talent scheme, since Blizzard essentially took 9 talents from the Ret tree and are asking Rets to “rebuild” the spec with only half as much as they had before. Hopefully that will change before things go Live, but I’m used to the idea of paladins being nerfed into the ground and/or Ret getting screwed, so whatever.

Point is, the talent tree system has always been bad. There was nothing exciting about leveling up and putting a talent point in something that just increased your damage by 10%. Under this new system, you get the 10% damage talent automatically and then get to decide something that is actually meaningful. Nils used the following example under druids:

He thinks the obvious choice for Feral PvP is Faerie Swarm. Are you kidding? One of the funnest things in WoW is popping out of stealth and Typhooning people off of ledges, which has traditionally be reserved solely for Balance druids. I would always choose Typhoon, because Typhoon is fun for me. That singular instance of interesting choice is worth the entire overhaul to me. Nevermind my ability to give Ardent Defender the finger and not be too punished for it. And being able to take Shadowfury as an Affliction warlock. Or getting Cauterize and Ice Barrier as an Arcane mage. Or… you get the idea. Some classes have more interesting choices than others, but hopefully these were just rough drafts.

Overall, as an ex-WoW player I am more excited for the expansion than I was three days ago, almost entirely based on these changes alone.